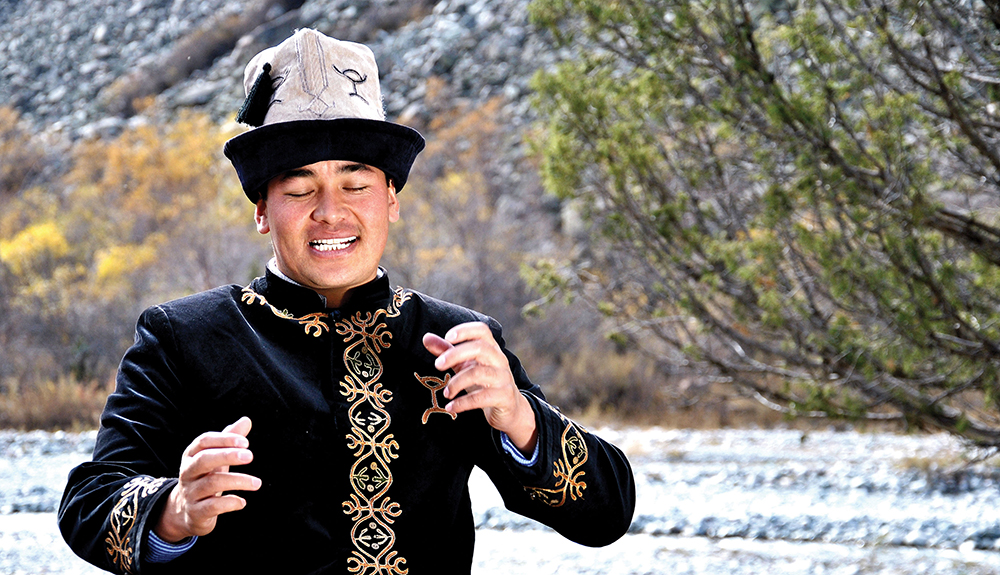 Kyrgyzstan, a former Soviet country, lies in the heart of the Tien Shan Mountain Range and the mountains of Ala-Too in Central Asia. This small country is mostly inhabited by the once-nomadic Kyrgyz people who take great pride in their whitecap mountains and ancient culture.

Aigine1A Kyrgyz word, aigine means clear and precise. CRC is a non-profit NGO established in May 2004 with the mission of expanding research and education into lesser-known aspects of the cultural and natural heritage of Kyrgyzstan, integrating local and scholarly epistemologies relating to cultural, biological, and ethnic diversities.

For the last ten years, Aigine has been studying, documenting, safeguarding, and promoting the vibrant cultural heritage of the Kyrgyz people in the following domains—sacred sites, including their natural, spiritual, and social components; the Kyrgyz heroic epic trilogy (Manas, Semetey, and Seitek)and Kyrgyz folk music. These domains accumulate key ICH elements requiring safeguarding and promotion among younger generations in present-day Kyrgyzstan.

Our center has been engaged in a profound and systematic study of sacred sites in Kyrgyzstan since 2005. Today, we have an inventory of 1,075 sacred sites with detailed locations, descriptions, and pictures. This cluster of sites enabled us to define and outline the Sacred Geography of Kyrgyzstan. The study also investigated and unveiled such ICH elements as historical and contemporary dimensions of sacred sites, as well as belief systems, rituals and pilgrimage practices. This data has been published in fourteen books available in English, Kyrgyz, and Russian.

Our center undertook several important activities to safeguard and promote Kyrgyz epic heritage. We pioneered to create the first video compilation of the entire epic trilogy narrated by contemporary epic chanters (manaschy). A three-year intensive video shooting resulted in a sixty-seven-hour video compilation of epic recitation by fourteen manaschys. Today, it’s the only existing digital version of the entire trilogy. It has been distributed to over then thousand schools and higher education institutions throughout the country. The video compilation has been included in academic curricula and shared online. Another groundbreaking project was our School for Novice Manaschys aimed at revitalizing a long-forgotten traditional mentor-apprentice system. Nine novice chanters from different regions were selected and had a unique chance to learn from, and build close relations with, their teachers, and advance their recitation skills. Today, our graduates successfully follow their spiritual calling, having reanimated the traditional master-apprentice system. Aigine assisted manaschys in building a strong nationwide network and contributed to inscribing the Kyrgyz epic trilogy on UNESCO’s Representative List of the Intangible Cultural Heritage of Humanity in 2013.

The Kyrgyz have a rich musical heritage with melodies played on a komuz, a traditional three-string musical instrument. In the past, the knowledge of music was passed orally based on a traditional teaching system. Today, the only known traditional musical notation system of komuz playing was developed by Nurak Abdrakhmanov, a renowned Kyrgyz musician. The en-belgi system is built on such ICH elements as traditional mentorship, values, and practices. Aigine’s fruitful partnership with the musician resulted in publishing an en-belgi teaching manual, developing a two-year seminar for music teachers, and integrating en-belgi in formal education.

Years of experience have taught us that biocultural heritage can be best safeguarded when incorporated into contemporary life. Through our work, we managed to build effective connections with practitioners and state agencies, thus bridging important stakeholders and rights-holders involved in preserving biocultural heritage. We strongly believe that together we’ll continue safeguarding our ancient culture and pass it on to younger generations.