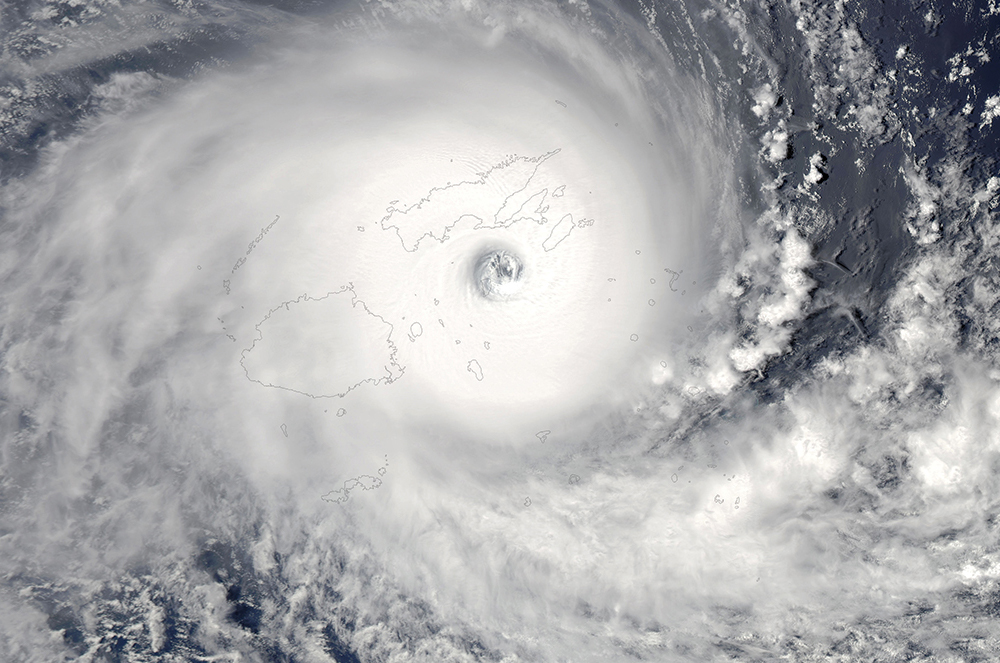 Natural calamities are a major threat to the sustainability of traditional knowledge systems, cultural practices, and well-being of many Pacific island communities and peoples. Fiji is no exception as was evident when Tropical Cyclone (TC) Winston, a category 5 cyclone, hit the country on 20 February 2016.

With winds of more than 233 kmh and wind gusts peaking at around 306 kmh, TC Winston is one of the most intense cyclones on record to directly affect Fiji, and the most severe to ever hit the South Pacific. The extreme destructive nature of the cyclone caused widespread damage and destruction to property, agriculture, infrastructure, and livelihoods of people, affecting 62 percent of Fiji’s population and delivering a damage bill of F$1.29 billion (US$0.6 billion).1Government of Fiji. “Fiji Post Disaster Needs Assessment: Tropical Cyclone Winston, February 2016.” May 2016: pp. 9-10.

Immediately after the TC Winston, the Fijian government requested that a post-disaster needs assessment (PDNA)2The overall activity was funded by the European Union, United Nations, and World Bank with support from regional bilateral partners. be conducted. It was for the first time Fiji initiated an assessment of damages and losses incurred by the culture sector. The Department of Heritage and Arts of Fiji coordinated assessment activities by enabling financial support from UNESCO.

A terms of reference was established for national stakeholders, including experts from UNESCO, ICOMOS Australia, ICOMOS Japan, and the Pacific community, to guide the PDNA. The latter focused on cultural heritage and cultural facilities and spaces in the disaster area.3Translated from the PDNA Culture Guide, which emphasizes five domains: (a) built heritage and cultural/natural heritage, (b) movable properties and collections, (c) intangible cultural heritage, (d) repositories for heritage, and (e) cultural and creative industry. With limited baseline information available, the cyclone damage assessment aimed to be strategic rather than an exhaustive evaluation of the destruction. Two approaches were pursued: (a) data collection through an onsite field assessment by experts and national assessors and (b) baseline post-TC Winston data collection4Data were collected through initial damage assessments or preliminary rapid assessments, such as the Rapid Assessment of Levuka World Heritage Site by Department of Heritage and the National Trust of Fiji from 23 to 27 February 2016. with relevant cultural institutions. An institutional arrangement list aligned to the five categories of the PDNA Assessment for Culture was established, including those specific to ICH, infrastructure-to-base assessment, location, and the institution responsible for the field assessment. As a complementary tool, a matriculation of indicators to ascertain damage and loss incurred by all categories including ICH was developed and tagged onto the field assessment survey form. The survey of the Navala Village as an ICH space evolved around this mechanism.

Cyclone Winston Tribute, includes satellite images, shots of during and after the storm and interviews from locals.

Navala Village, Ba Province, is unique in that it is the only village in Fiji that boasts the continuity of traditional architectural knowledge. An estimated 130 traditional thatched houses or bure make up the village and still survive today with associated practices staying true to their origin. The village, which was gradually formed in the late nineteenth century, consists of six mataqali (clan) who gathered on this isolated mountainous basin, escaping from their original villages during tribal wars. Today, some seven hundred people still live in traditional structures, isolated from electricity and modern elements. This beautiful village scape harmonized with the surrounding natural environment has rich ICH. In recent times, the village community has pursued a small-scale cultural and eco-tourism venture that has become a foremost income source to maintain and develop the village.

As focal point for the ICH PDNA, the Ministry of iTaukei Affairs dispatched a team of experts. With limited substantive baseline data on the village (as it has yet to be mapped), the team visited individual households, including those damaged.

The effect of TC Winston was significant with 23 percent of bures sustaining major damage.

During the assessment, the team determined that the use of both traditional and modern materials during bure building endangered the longevity of a bure. They also observed that some proactive villagers had started to re-thatch bures with minor damages. This demonstrated that traditional house building skills are still viable in this community.

In addition, the PDNA Team for Navala Village recommended the following recovery measures:

TC Winston caused significant damage and losses to Fiji’s cultural heritage, especially in the severely affected areas of the eastern division. Damages sustained by the culture and heritage assets amassed FJ$5.9 million (US$2.95 million), affecting the livelihood and social and cultural sustainability of Fijian communities.

The cyclone affected Fijian ICH. While the Navala Village assessment stood out, additional surveys were conducted in other villages where different forms of ICH have been continuously shared. The damages were concentrated on raw materials necessary to produce costumes for rituals and prepare herbal medicine, totemic plants/trees, and crops and animals for rituals and ceremonies.

The Fiji PDNA Report also stressed the important link between ICH safeguarding and natural resource management by referencing Fiji’s Green Growth Framework. Addressing issues over climate change and environmental sustainability, the Green Growth Framework was endorsed at the 2014 National Green Growth Summit. It provides a strategy for striking a balance between economic growth and environmental sustainability, which involves promoting access to natural resources that provide raw materials that are indispensable for community life. For example, this could include forest resources necessary to build traditional houses, weave mats, produce tools, carry out customary rituals, and organize festive events.

It is important to announce that the Fijian government is nominating the cultural mapping program for inscription on UNESCO’s Best Safeguarding Practice Register. The nomination file will be presented at the ICH Intergovernmental Committee Meeting that will be held in Addis Ababa in December 2016.

The PDNA mechanism has shown the benefit of Fiji being a State Party to the 2003 Convention. It underpins the importance of recognizing and respecting cultural practices and expressions as a foundation for the identity and sustainable development of communities.