People have lived on the small atolls that make up the Central Caroline Islands, now part of the Federated States of Micronesia, for over a thousand years.
Micronesia, as it is commonly referred to, is made up of four mountainous states: Kosrae, Pohnpei, Chuuk, and Yap, with hundreds of small raised coral atolls.
Yap is considered still to retain much of its cultural heritage.

Life on these remote, outlying islands could for some, especially those from more developed countries, prove lonely and isolating, if not downright difficult. For one thing, the typical size of these atolls is around 2.6 square kilometers (1 square mile) with an average population of 200. Being surrounded by the vast Pacific, they appear on maps as nothing more than tiny dots in the deep blue ocean. 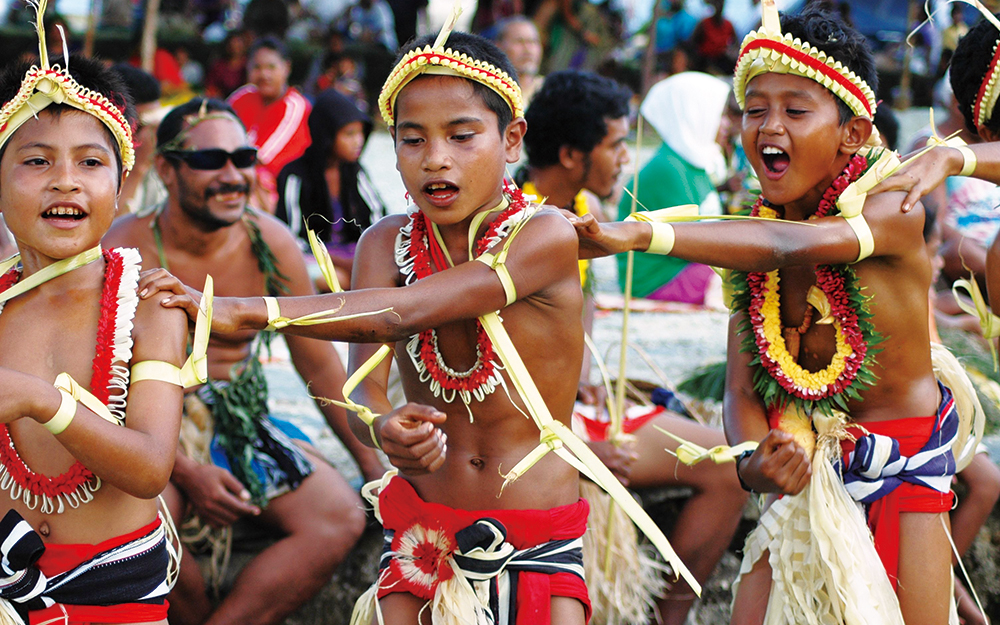 But for anyone from these islands, life is full and never short of activities. These will include daily fishing or hunting voyages. Constructing canoes and gardening are common work that most community members are occupied with. In the evenings and on specials days such as Church or other holidays, including Christmas and New Year, the entire island community comes together to enjoy variety of performing arts such as dances.

Dances are believed to be gifts passed on to the ancestors of these islanders by higher beings or deities, or were composed by individuals or groups in commemoration of historical events on the island or individual achievement. Since cultures on these islands were never written in previous times, their histories and accounts of achievements and catastrophic events were often translated in chants, oral stories, and dances.

Dances on the islands come in various forms, including sitting and standing dances for women or for men, war dances using sticks or clubs, and more recently marching dances. Both the stick dances and marching dances can be performed by mixed gender groups. It is common that before special events and holidays such as New Year, the chiefs and elders of the community will instruct the community to begin practicing for dances to perform on those occasions.

Since dances are believed to be gifts from spiritual beings above, the dances must be “brought down” for display and “hung up” again afterward. Once the dance is brought down, there are several stages of preparation. These include the initial preparation stage (haaipol), during which potential participants meet and lead dancer(s) (taupoo) are identified. The lead dancers are a couple of individuals who are well versed in the chants associated with the dance along with detailed choreographed movements. Organizing and positioning of individual dancers in an orderly line formation is also done at this early stage. Practicing the dance will take a couple of weeks. Haapulaf is when the movements and chanting are in sync and the dance is pretty much ready to be performed in front of a wider audience. During this stage, the community is requested to join the pre-show, final rehearsal prior to the main event. Haapulaf thus means both a bonfire party for final corrections and a sneak preview. This event normally takes place a day before the actual event.

On the day of performance, the entire island community
busies itself gathering and preparing all the materials needed to fix costumes, body ornaments, and other decorations for use by the dancers. It is important that the dancers be uniformed in costumes that include grass skirts for the women, made from hibiscus or coconut leaves. Turmeric powder and coconut oil are applied to the body, while flowers or young coconut leaves are woven into headwear. This performance stage is she, which refers to the break in or bringing the dance to the dancing platform.

Because dances are gifts given to the community through their chiefs and guardians, it is essential that prior to performing
the dance, established protocols must be accorded. As such, the dancers are led to the platform by an elder who is expected to carry a bundle of leaves and a traditional gift offering. The leaves are used to ward off bad spirits or dark omens and any ill feeling toward the dancers. The gift offerings are given to the chiefs as a token of appreciation for allowing the dance to be performed and the dancers to raise their voices and make a loud noise in the village. On the main island of Yap, a large, round piece of Yapese stone money is usually brought to the dancing area to be presented to the chiefs.

During the dance, it is a cultural taboo for any spectator to walk in front of the dancers, much less in between them. However, an exception is made for those who are expected to bring traditional gifts to bestow upon any one particular dancer whom the relatives feel has put on a fine performance, and then they lay gifts in front of the dance area for all performers.

After the performance is done, the village the dancers come  from will enjoy the final show stage, chengag—“hanging up” or returning the dance to its rightful owners, the gods. The villagers will gather food and beverages in preparation for this final festive event. The dance will again be performed in its entirety, and when it is done, the performers will be recognized for their achievement and the villagers will feast on the abundance of food that had been  collected.