A Sanctuary of Flow and Transmission

We all need space to fully immerse ourselves in our work, whether it’s an office, a research lab, a café, or a transmission space. Only when we have secured an area in which we can focus on work, we produce a high quality of work. To this end, we select such spaces by ranking them according to criteria such as the floating population, demand, rent, condition, and infrastructure. An artist I know established a studio in the vicinity of Hongik University in Seoul, since it is a bustling downtown area with a large floating population of people involved in art and culture. One pottery artist launched a workshop in Icheon, Gyeonggi Province, since Icheon has close historic ties with pottery to the point that there is a village consisting entirely of pottery workshops and factories. The space in which a person takes root for months—or even decades—can reveal much about their life and personality, while allowing visitors to discern what they are about to see. That is the true power of a space. 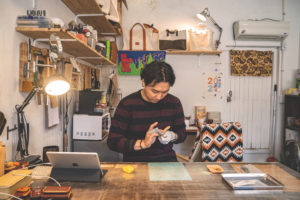 Since launching my business, I moved venues three times and renovated three spaces before settling on a worthy location. The first was Heeheedang, a youth residence with shared spaces. The Culture Village in Nosong-dong, Jeonju, has many houses that were built in the 1970s and 1980s. We remodeled one such house in collaboration with youths and eventually took on tenants. It was sometimes used as a residence, sometimes as an office, and sometimes as a party hall. The second was the coworking space for Jeonju Social Innovation Center. The Center is an intermediary organization that identifies and resolves local social issues. The third floor of its building is a coworking space for enterprises with social missions, which made it perfect for us, as we are a company that specializes in content for local youths and cultural heritage. The key point was providing a shared space for diverse networking and communication. The third is our current office, which is located between Jeonju Pungpaejigwan and the Tool Shop Street. The building has been used by youth culture planning companies since 2015 and we became tenants in 2021. At the time, the space consisted of white tiles, large windows, and a somewhat dark and drab kitchen. We decorated the place in our brand colors of jade green, reddish-brown, and light yellow, and it gradually evolved to represent FROM HERE’s space, time, and identity.

ICH Spaces and Practitioners in the Republic of Korea 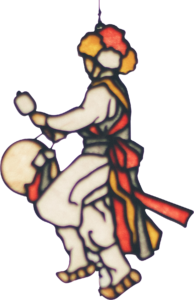 ICH refers to culture that endures for a long time alongside the community of a certain region and has value to endure. The region in question may be the entirety of Asia, a country like Kyrgyzstan, a city like Manila, or a village like Daraengi. Each cultural practitioner must seek out, cultivate, and utilize a suitable transmission space for their circumstances, thereby marking their time onto the space. In this regard, this article seeks to briefly explore the past, the present, and the next step of transmission spaces in Korea.
Choi Dongsik is a North Jeolla Province intangible cultural property practitioner for traditional musical instrument-making; he has been crafting string instruments since the 1960s. He is currently running a workshop in the Yongmeori Hill area of Jeonju, North Jeolla Province. In a single-floor workshop building made of only bricks and concrete, he is accompanied by myriad fans and equipment. The severely dilapidated building gets extremely hot in the summer and frighteningly cold in the winter. Meanwhile, Im Seonbin, another instrument-maker from Gyeonggi Province, has been producing drums since the 1960s in a space of around 300 pyeong (approx. 992 square meters) without proper facilities such as a workshop, showroom, or storage. Not only that, the threat of redevelopment in the area is a constant source of anxiety for the artist.

Safeguarding ICH
The Korean government legislated the Cultural Heritage Protection Act in 1962 to curb its rapid extinction. The first generation of ICH practitioners designated in the immediate aftermath consisted of those born from the 1910s to 1940s, who experienced the Japanese colonial occupation and the Korean War. They chose to work in minimal spaces that allowed them to produce their art under limited resources and unfavorable circumstances, concentrating on their craft alone each day. Most of them continue to work without an adequate workshop to this day.
Then the next generation came. For example, craft artist Jeon So-ri creates dreamcatchers using hanji (traditional Korean paper). Her dreamcatchers incorporate flowers and local characteristics, presenting craft items that delight the eyes and hearts of the audience. After working as a craft experience instructor at Soyang Daeseung Hanji Village and Jeonju Cultural Foundation, she finally opened a workshop of her own in 2019. The second example is leather craft artist Shin Pyeong-hwa. He began to learn leathercraft after becoming enamored with leather one day and eventually established his own workshop in 2017. He has a personal workspace where he can teach two to three students and a slightly larger showroom for leathercraft items. Having studied fashion design at university, Shin also displays merchandise such as cups and eco-bags. The third is bookshop owner and novelist Kang Seong-hun, who opened Bookstore Kafka in 2013. He enjoys handcrafting furniture as much as he enjoys writing and books. As such, his bookstore is composed of a section for displaying books, a section for writing and lectures, a section for crafting furniture, and a café. In this regard, his bookstore is the very reflection of his lifestyle. 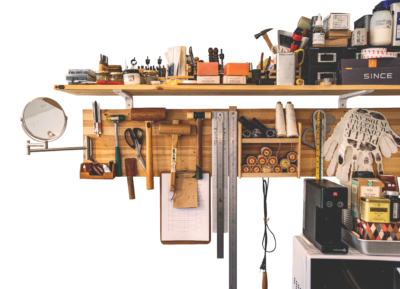 Republic of Korea underwent growth at a remarkable pace from the 1960s to 1990s in the so-called Miracle on the Han River. It was the fruit of Korea’s efforts to become a “fast follower” in rapidly imitating and implementing the strategies of advanced nations. Having raised the per-capita GDP from USD 87 in 1962 to USD 1,693 in 1979, the moniker of a miracle is no exaggeration. Then, in the 1990s, the keywords “uniqueness” and “tastes” entered the popular lexicon, centered around Generation X, which began with those born in the 1970s (by Korean standards), and the subsequent Generation MZ. Unlike the first-generation ICH practitioners, who pursued their art relentlessly to make a living without a choice in the matter, the second generation pursue uniqueness and different tastes. To this end, they present a clearer sense of reason and meaning in their work, answering questions such as why they do this work, how seemingly identical works differ, and how and how well they can demonstrate their sense of identity through their craft items and workshops. The second generation of artists and their successors will gradually seek to live by the three following mottos:

• Endlessly research and demonstrate one’s own style.
• Be bold in establishing and combining one’s main work and secondary work, as well as main materials and secondary materials.
• Strive for the ultimate goal of realizing one’s own way of living well, instead of pursuing conventional success.

The important thing is that the way of proving one’s own identity requires a balance between self-acceptance and popular response. Though we should not be tied to the opinions of others, there is also no reason why we should refrain from showcasing our ideas to others. This sense of direction is being reflected in transmission spaces and craft items. As such, transmission spaces must provide convenience and efficiency to allow immersion in creative activities, while also clearly embodying the transmitter’s narrative and personality. This is because these spaces contain not only cultural heritage but also the space utilized by transmitters, the time accumulated by them, and the identity of the region they inhabit.