Cultures in a Cosmopolitan City: Challenges, Changes, and Continuity

There are various phenomena that pose a risk to living heritage, ranging from demographic issues to economic pressures, as identified by UNESCO (see https://ich.unesco.org/dive/threat/). This article will address three ongoing issues commonly believed to present a considerable challenge to the viability and practice of ICH in highly urbanized cities: limited land area, increasing focus on modern technology, and the COVID-19 pandemic.
As a metropolis with a population of 5.45 million across 728 square kilometers, Singapore must keep abreast of developments in modern technology and urbanization, along with the social, cultural, and economic changes they bring. Similarly, as a hub of international travel and business, Singapore had to navigate the waves of change brought about by the COVID-19 pandemic, and its implications on the city-state’s ICH.
Despite the belief that such conditions may be unfavorable for ICH to thrive and prosper, communities practicing ICH in Singapore have managed to adapt and evolve with these contemporary realities. This article will provide three case studies on ICH rituals, practices, and festive events that have managed to remain relevant by navigating the realities of urbanization and capitalizing on modern technology.

Screenshot of Theemithi’s 2016 Silver Chariot Procession route through residential estates and live-streaming details for greater accessibility to the community.
© Hindu Endowments Board, Singapore

Chingay
Chingay takes place on the second weekend of the Lunar New Year and is typically held over two days (see www.roots.gov.sg/ich-landing/ich/chingay). The festival, which has long roots in Singapore’s cultural history, has grown to become one of the most significant events in the country’s socio-cultural calendar. Known for its carnival atmosphere, it is a multi-cultural event that involves not only the Chinese but also other ethnic groups in performances and contemporary culture.
As Singapore and its community continue to grow and evolve, so has the Chingay parade. In its early years, from 1974 till 1980, the procession was staged in different public housing estates, before moving to Orchard Road, Singapore’s main shopping belt, for the first time in 1985. At the turn of the millennium, the procession took a new route through Singapore’s Civic District. The parade subsequently moved to Chinatown in 2003 and Marina Bay in 2010.
As the population grew and spaces within the city changed, the organizers and community behind the parade continued to alter the parade route to ensure that Chingay remains accessible to residents across Singapore. For instance, since 1997 an initiative titled Chingay@Heartlands has brought selected floats and featured performances to different residential districts, allowing more residents across Singapore to experience the parade.
Chingay has evolved not just in terms of changing the urban spaces where it is held but also in expanding its repertoire, from fourteen forms of traditional performing arts in 1973 to its current status of a street parade boasting a wide array of performers, community floats, jugglers, percussionists, lion dancers, traditional performing arts such as dikir barat groups and kathakali dancers, acrobats, and fireworks, among many others, representing the diverse ethnic communities in Singapore and cultural influences from the world over.

Owing to restrictions on physical gatherings brought about by the COVID-19 pandemic, the parade went fully digital in 2021 and was adapted into a hybrid showcase at Jewel Changi Airport early this year. The event was live-streamed on YouTube, Facebook, and national television to continue the tradition of bringing joy, fervor, and celebration to the community, allowing the performers to still be part of the celebrations, and the public to partake in them in one way or another.
Hence, the way Chingay has adapted to the changing availability of physical space in an urban city and successfully used technology to keep the spirit and practice of the parade alive serves as an example of how ICH can continue to thrive in a modern city.

Silver Chariot Procession
The Silver Chariot Procession is a religious ritual practiced by the Hindu community, in which a huge processional cart carrying a sacred idol of a presiding deity is towed along a public route by worshippers (see www.roots.gov.sg/ich-landing/ich/silver-chariot-procession). The craftsmanship and maintenance of the silver chariots before and after the procession are also integral to the tradition, and the practice has become more elaborate over the years as Hindu temples and the community grew in numbers. 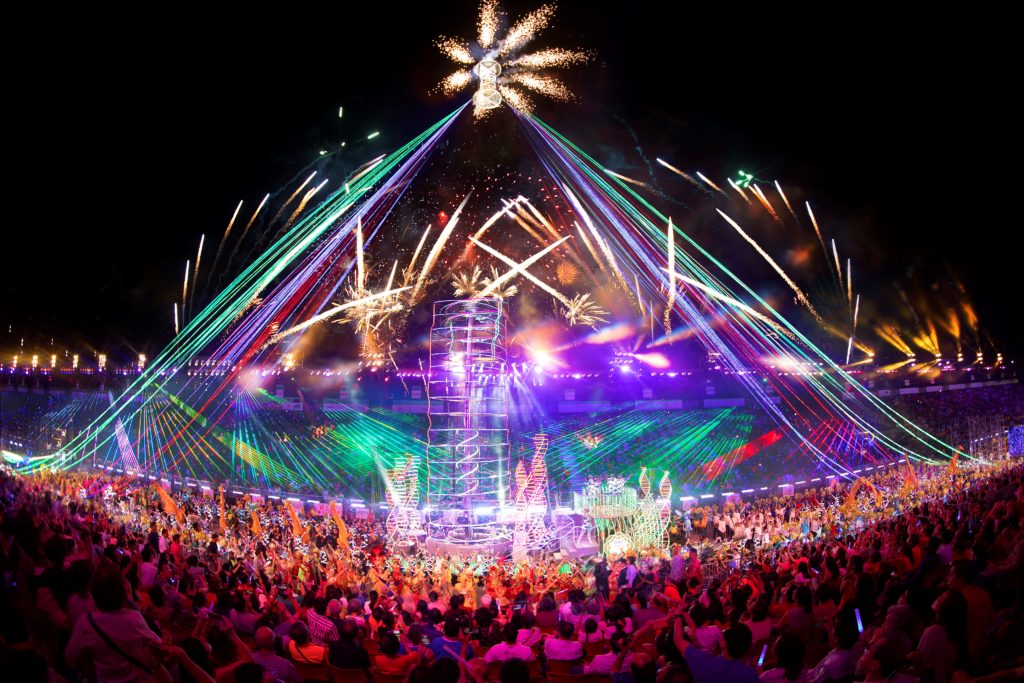 There are two prominent Silver Chariot Processions celebrated each year: the first in commemoration of Thaipusam, and the second for Theemithi. Both of these processions pass through the city’s Central Business and Civic districts as well as various public and private housing estates. Devotees walk alongside the chariot, and sighting the chariot is believed to be an auspicious blessing for anyone witnessing the procession, with devotes typically offering varisai—plates of offerings such as fruits, flowers, silk garments, and incense sticks—to the chariot’s presiding deity. As the procession takes place in the vicinity of housing estates and the city center, overhead obstacles such as toll gantries, bridges, and suspended decorations have posed challenges to the continuation of this practice. The organizers and community continue to evolve with the growing and changing needs of the city by maneuvering around these physical obstacles and altering the procession route.
To keep the tradition and practice going during the COVID-19 pandemic, the chariot procession continued on its journey with only a priest and a handful of volunteers (compared to typically hundreds of participants in normal conditions), with the procession live-streamed on Facebook and YouTube for the community to observe—an inclusive initiative which has been implemented by the Hindu Endowments Board since 2014 to make festivals accessible to those who are unable to be physically present. 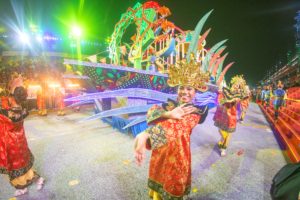 Today, devotees across age groups continue to attend and partake in the practices associated with the Silver Chariot Procession, from maintenance of the chariot—including carefully fitting together, decorating, and polishing the numerous intricate pieces that make up the chariot—to partaking in the procession, both physically and virtually. Multiple generations of Singaporean Hindus have become accustomed to celebrating traditional religious practices amid the evolving nuances of a densely populated and constantly growing city.

Hari Raya Puasa
Hari Raya Puasa, also known as Hari Raya Aidilfitri or Eid al-Fitr, is a major festival marking the end of Ramadan. It is celebrated by Muslims across the world, including in Singapore (see www.roots.gov.sg/ich-landing/ich/hari-raya-puasa). Muslims observe a fast throughout Ramadan—the ninth month in the Muslim calendar, considered to be the holiest of all months—during which they refrain from consuming food or drink from dawn to sunset. Communal feasts at home with family, relatives, and friends are a highlight, and the mosque plays an integral role during the holy month, with special prayers being held throughout.
Historically, villagers would work together to decorate the neighborhood and have communal feasts. While the majority of the community have since moved to high-rise apartments across Singapore, the ethos of the community and their spirit of sharing continues to live on. These communal feasts were moved to homes or mosques, where families would send trays of food for sharing, and many a time extended to neighbors and friends as well. Visiting the homes of relatives and friends takes place throughout Syawal (the tenth month of the Islamic lunar calendar, beginning with Hari Raya Puasa), and family members often work together to prepare food for such gatherings.
In Singapore, places like Geylang Serai (once one of Singapore’s oldest Malay settlements) are lit up a month before Hari Raya Puasa, and a grand bazaar selling an array of local food, traditional desserts such as kueh, clothing, and accessories are a huge draw, with festive bazaars becoming common in other locations as well, such as Kampong Gelam (a historic district typically associated with the Malay, Arab, and Bugis communities).
In 2020 and 2021, however, due to the pandemic, bazaars were put on hold as large social gatherings were prohibited. The community adapted to these challenging times by live-streaming prayer sessions and sermons from various mosques around the city, visits to relatives’ homes turned virtual with the aid of mobile devices and social media, and there was a rise in home-based businesses who could deliver the traditional food and desserts typically found at the bazaars. 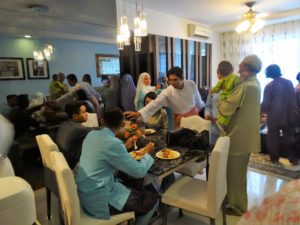 Families getting together to celebrate Hari Raya Puasa, pre COVID-19. © National Heritage Board

Additionally, the National Heritage Board, with the Malay Heritage Centre, organized a diverse line-up of online and hybrid programs that showcased the food, fashion, culture, and performing arts of the Malay-Muslim community. These efforts allowed the atmosphere of the festival to be felt by all and enabled the social practices of the festival to remain accessible to the community despite the impact of the pandemic.

Conclusion
While there is a perception that the environment of a city is unfavorable for ICH practices to flourish, the various communities in Singapore have managed to steer through the realities and challenges of limited land area, increasing reliance on modern technology, and the COVID-19 pandemic. Through continued evolution and adaptation by the various communities involved, ICH rituals, practices, and festive events continue to remain relevant and, in fact, prosper in the city-state of Singapore.