Deciphering Food Preservation as a Storage Technique through Purumenth, a Goan Customary Tradition

One of the largest and earliest flows of culinary cultures and fresh produce to the Indian subcontinent emanated from Portugal. The Portuguese were ardent sailors. Their expeditions to voyage, discover, and conquer brought Western foods to the Eastern world. The Portuguese contributed foods that are now staples in the Indian diet. Goa became the chosen land as the local inhabitants were regular pork consumers, like these visiting sailors. This points to the influence in terms of food and consumerism by colonialists and settlers. The Goan cuisine has been shaped through these assimilations; the story is quintessential to the culinary history of the land. 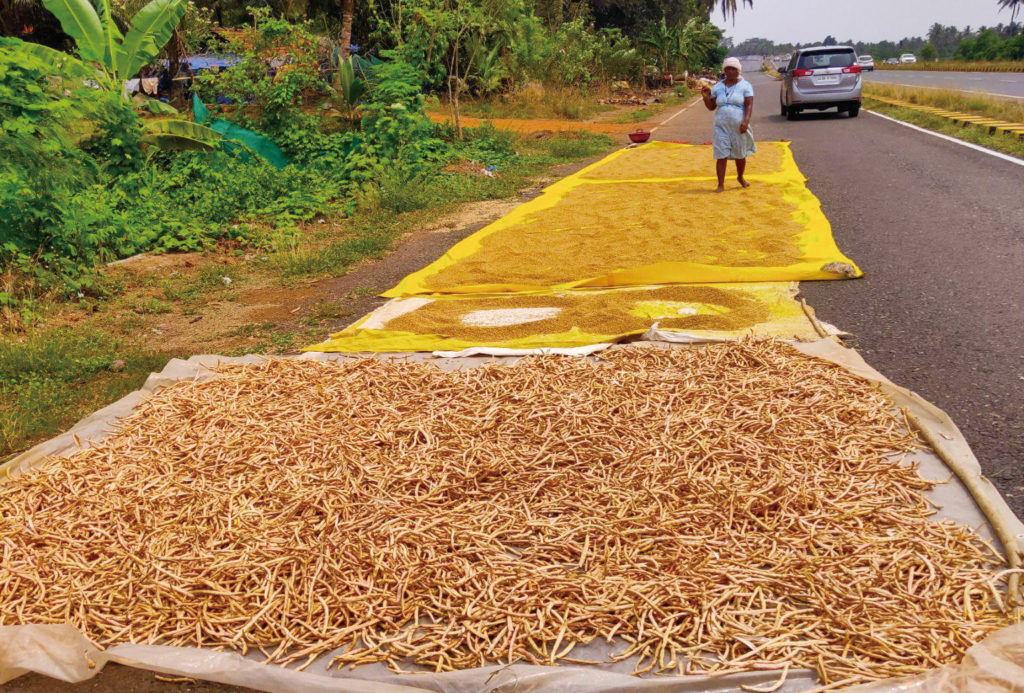 The largest community of the Goan land, before the arrival of the Portuguese, were the Hindus. And today the majority of the population are either Hindu or Catholic. Both communities have their processes that come together under the banner of Goan cuisine. As a visitor, one can easily fall for various tourist-oriented adaptations of the traditional preparations that make up the cuisine. The Goan Hindus use fermentation to prepare their sannas (steamed rice cakes), salting fresh fish underground, pickling seasonal fruits and vegetables, and make good use of both fresh and dried fish. In comparison, the Goan Catholics use fermentation to prepare the famous cashew feni (a local liquor preparation from cashew fruit) and “toddy” vinegar (vinegar prepared from coconut palm sap), baking to prepare poie or pao (bread), and curing to prepare the famed Goan pork sausages, also known locally as chorizo or choriḉo.1
The coastal location of Goa makes its people a predominantly pescetarian community. With this kind of diet, they follow various rituals that are majorly seasonal. The monsoons are considered to be the breeding period for aquatic life as well as a difficult period for fishermen to venture into the turbulent sea for their daily catch. Hence, these communities whose staple is seafood began abstaining from its consumption during those few months. This resulted in shortages in acquiring fresh foods. And these shortages created the necessity to store foods, which evolved into a cultural tradition around having stocks of seafood and other essentials ready just before the onset of the monsoon season. This tradition is followed in all households during the summer months and is called purumenth, a Konkani word derived from its Portuguese counterpart provisao/provimento, meaning “provision.” This customary practice shaped the way these communities discovered the science of food storage and continue to enjoy their meals and preparations during the climatologically unfavorable months. 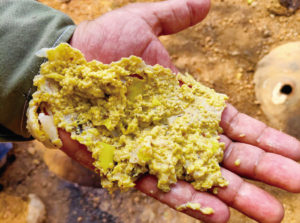 Cashew fruit pulp after mashing. The juice and pulp are left in an earthen pot to ferment for more than three or four days for microbial formation.
© Siddhi Potdar, 2022

Purumenth brings together all the members of the family in a festive-like arrangement. Over the years, it has become an influential narrative for customary poems and oral tales that were themed around its rituals, practices, and engagements. This cultural heritage is passed down over generations, making purumenth a homely celebration. The associated duties are organically distributed among the adults, who take up skilled tasks like drying the fish and stuffing the sausages, while the children enjoy plucking fresh fruits off the trees and keeping birds away from the drying items like scarecrows.2
In her book Cozinha de Goa: History and Tradition of Goan Food, Fatima Da Silva Gracias mentions that in the times when refrigeration was not an available technology, the processes of cleaning, sun-drying, salting, curing, pickling, and/or fermenting had to be planned well in advance. Some notable foodstuffs are kokum (Garcinia indica), kharem (salted fish), kismur (dried prawns), seeds from raw mango and jackfruit, tamarind balls, and kollache ambe or meetha ghallele ambo (raw mango stored in brine/salt water). Paddy and grains would be dried and de-husked before storage. The activity of drying takes up a significant amount of time during these summer months, with the dried foods including grains, fruits, vegetables, spices, seafood, and meat. Goans had larger houses back then, which allowed them to have a separate storage area with the right conditions to keep away infestation or rot. Wood for cooking would also be sun-dried and stored in these places.3Purumenth also marks the first season of making feni, a locally developed liquor that is processed by fermenting fresh juice from cashew fruits. The second season of this process is during the months of October and November. These uniquely evolved cultural traditions that have shaped as indigenous knowledge systems of the land and its people make the Goan cuisine one of the most distinctive on the Indian palate with its rustic flavors, sharp aromas, and vibrant colors. 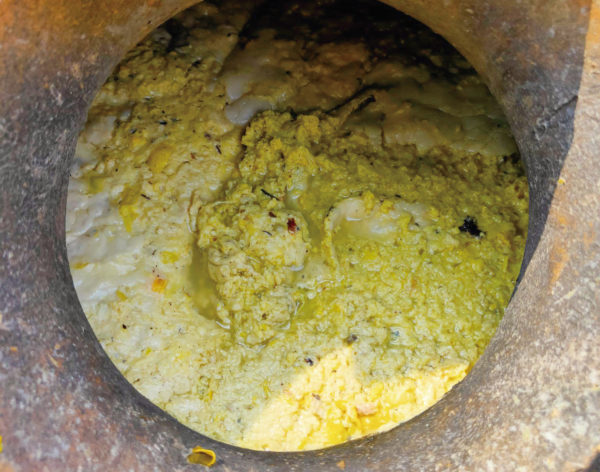 Cashew fruit pulp after mashing. The juice and pulp are left in an earthen pot to ferment for more than three or four days for microbial formation.
© Siddhi Potdar, 2022

As noted, the introduction to agriculture and its incorporation into ancient cultures bore the necessity for storage. Organic matter begins the process of decay as soon as it is bereft of life, both in plant and animal-based matter. Hence, for people to use natural produce for longer and sustain good eating conditions, appropriate storage techniques were developed. One such technique is food preservation, which turned into a customary ritual with practices like purumenth. For example, prepared pickles included seasonal fruits like ambuli or karambi nonche (raw mango pickle), kadgi nonche (jackfruit pickle) and bimbli (a native souring agent found in this tropical region), along with fresh and dried fish like the bombil (Bombay duck), sungta (shrimps), and bangda (Indian mackerel).
Food preservation has been a feature of most cultures across the planet, even before recorded history. This substantial influence on the use of preserved foods is evident across the Indian subcontinent as well. With modern technological advances, there has been an entire flourishing industry that supplies preserved foods. With the development of more and more food preservation techniques, this craft did not limit itself only to sustenance but became a cultural affair. More traditions and practices were introduced as food preservation became an annual ritual. Indian women devised rhythmical hymns, folklore tales, and homely secrets associated with various seasons of fermentations, which remain a prominent cultural aspect of Indian life today.
Such cultural amalgamations of essential practices become tradition, and the sustenance they provide shapes and provides “livingness” to these experiential forms of ICH. They help construct an identity of the place alongside catalyzing the endurance of cultural practices, as well as providing local communities with a unique identity.