Forging the Jewel in the Crown: India’s Jewelry Making Traditions

The tradition of jewelry making in India began with the prehistoric factories of the Harappan civilization which produced metal and bead jewelry and has continued unbroken over five thousand years in the continuity of its form, technique, and symbolism. Some of the earliest excavations of bead and stone factories have uncovered evidence of sophisticated tools like burins, scrapers, cylindrical drills, and micro-drills used to drill holes in beads and etch designs on precious and semiprecious stones. These beads, along with sheet gold and gold wire twisted into intricate earrings, necklaces, bangles, waistbands, and more, represent the humble beginnings of the Indian jewelry tradition. Jewelry has since been used to demonstrate affection, status, power, and skill.
Bridal jewelry is one of the most common displays of wealth. The value of the jewelry comes not only from its material worth but also from the level of intricate craftsmanship involved. An example of this is given in the Buddhist Dhammapada commentary of the Marriage of Visakha, the daughter of a wealthy treasurer named Dhananjay. E. W. Burlingame translates the original Pali text in the book Buddhist Legends (1921) as: “On that very day Visakha’s father caused five hundred goldsmiths to be summoned and said to them, ‘Make for my daughter a great-creeper-parure.’ So saying, he gave them a thousand nikkhas of ruddy gold and a sufficient supply of silver, rubies, pearls, coral, and diamonds to go with it.” The goldsmiths spend four months completing the parure using eleven different kinds of jewels, silver threads to make the fabric, and “seals of gold and dies of silver” used to hold together the fabric of the parure that stretched from Visakha’s head to her toes. The fabric was embellished with a peacock whose wings had feathers made of ruddy gold, a beak made from corals, eyes from gems, and precious stones set in the rest of its body. So impeccable was the craftsmanship that “when it was placed on the crown of Visakha’s head, it appeared like a peacock standing on the peak of a mountain and dancing; and the sound of the midribs of the thousand feathers was like the music of the celestial choir or of the five kinds of instruments. Only by going very close could people tell that it was not a real peacock. The materials used in the making of this parure cost nine crores, and a hundred thousand pieces of money were paid for the workmanship.”
The authors of the book Indian Jewelry: Dance of the Peacock (2001) extensively cover the jewelry making traditions of India. According to them, the ornaments have not been documented adequately but testimony to the art of jewelry making can be found in treatises like the Brihat Samhita (600 CE), which talks at length about gemology, Natyashastra (500 BC), which is a book on performing arts and lists four major types of ornaments, Ashtadhyayi (500 BC), which is a work on Sanskrit grammar and contains technical information on metallurgy and mineralogy, and Arthashastra (4 BC), which is a compendium on nation-building and gives information about the goldsmithing industry. 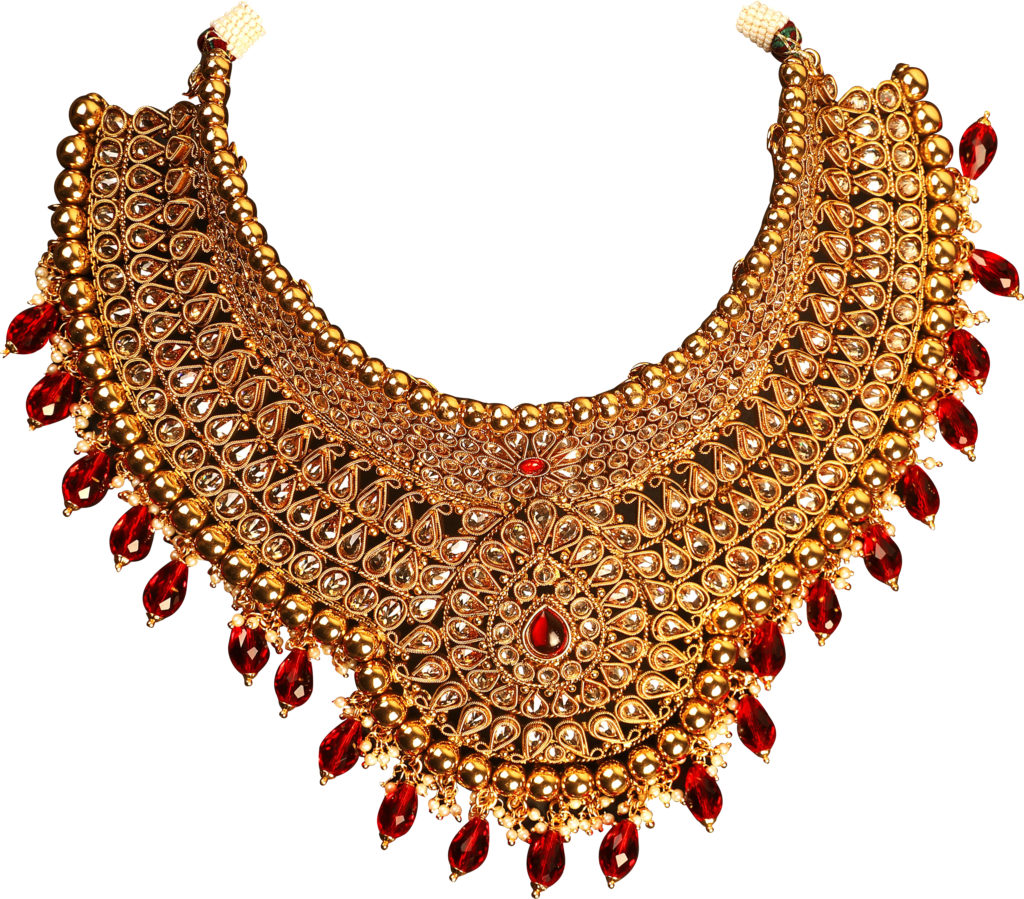 This grandiosity is not limited to humans—animals too have their share of wealth. One of the most beautiful and complex examples of animal jewelry is the nettipattam—the gold-plated caparison used to decorate elephants during the temple festivals in the southern state of Kerala. This massive piece of headgear is usually made of copper or brass, coated with gold, and takes no fewer than twenty days to make. The decorative elements consist of eleven crescents, different shapes and sizes of spheres, and around five thousand baubles surrounding the main elements. Each sphere symbolizes a specific deity and the rest of the baubles represent the stars. This caparison, along with other equally glimmering paraphernalia, adorn the elephant, which is the ultimate symbol of Indian royalty.
Members of royalty themselves went to great lengths to display their wealth and power through jewelry after successful conquests. Kautilya, the author of Arthashastra, particularly refers to Dakshinapatha (South India) as the “superior route” on which diamonds, rubies, pearls, and gold abound. This was especially true during the immensely wealthy reign of the Chola and Pandya dynasties. The Chola rulers, for example, acquired wealth through their conquests and held a monopoly over the gold and diamond mines, pearl fisheries, and the gem production of Ceylon (modern-day Sri Lanka). They commissioned magnificent temples and statues, with ornaments to decorate these statues. Under this patronage, jewelers were employed to create a constant production of jewelry for the rulers, their courts, and the temples. The royalty has now faded away but South India continues to glitter as the leader of the Indian gold market.
While contemporary jewelry has also become popular, the five-thousand-year-old combination of beads strung together with gold wires continues to form, in almost all cultures across the country, one of the most sacred pieces of the bridal jewelry collection. As heirlooms, jewelry is passed down from mother to daughter in the form of stridhan (stri = woman, dhan = wealth), as is the knowledge of jewelry making. This art form has continued to thrive despite the large economic disparity within the population and hence it is no surprise that India has been called sone ki chidiya (the golden sparrow) and “the jewel in the crown.” n