How Does Intangible Cultural Heritage Contribute to Disaster Mitigation? 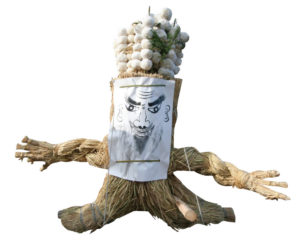 The relationship between disasters and ICH might share some similarities with the relationship between disasters and cultural heritage with physical form.  Natural disasters destroy tangible artifacts and monuments, strike at people, places, and communities related to ICH, and disrupt knowledge, skills, and technology. In this context, we need to prepare safeguards against the impact of disasters on both ICH and tangible heritages. Combining living heritage with people, places, and communities could also lead to an alternative way of thinking about how ICH might mitigate the impact of disasters. The role of culture in disaster mitigation and risk reduction is an idea resulting from recent disaster policies. The United Nations Office for Disaster Risk Reduction (UNDRR)  encourages strengthening communities’ capacity for managing disasters and risk reduction (Hyogo Framework) and advocates disaster risk reduction through integrated and inclusive economic, legal, structural, health, and cultural measures, among others (Sendai Framework). This article reviews recent scientific developments in cultural measures for disaster risk reduction and how ICH contributes to disaster mitigation, and identifies convincing arguments from case studies of the 3.11 disaster in Japan.

Socio-cultural Perspectives
Social scientists have investigated socio-cultural measures related to disaster risk reduction. One such study on indigenous knowledge, for example, was primarily triggered by the Sumatra–Andaman earthquake and the Indian Ocean tsunami of 2004. UNDRR actively advocates awareness of indigenous and local knowledge in the pre- and post-disaster phases as an effective disaster risk reduction tool. Modern thinking might be skeptical of any relationship between indigenous knowledge and disaster risk reduction. However, there is specific indigenous knowledge related explicitly to disasters, and such knowledge is  culture-specific. Hence, researchers have investigated local knowledge related to risk reduction and deliberated its applicability beyond its original culture.
One successful example of this is tsunami tendenko, a local oral tradition in Japan conveying urgent advice to save the self, even at the cost of leaving the family, by fleeing to higher ground when a tsunami strikes, thereby ensuring the survival of many people as possible. This oral tradition could be considered a part of disaster prevention culture.
The political scientist Daniel Aldrich and other scholars have uniformly asserted the significance of non-physical social infrastructure or social capital in disaster reduction. They describe features of social organizations such as networks, norms, and trust that facilitate action and cooperation for mutual benefit by implying that better social capital results in greater resilience. Anthony Oliver-Smith, a leading disaster anthropologist, suggests that disasters provide a rare opportunity for observing society’s resistance in the face of chaos, which is the essence of social mechanisms. Focusing on the socio-cultural process leads to the argument  about the role of culture in disaster vulnerability and resilience in the policy field. People are not passive observers of dangers but can worsen or avoid threats by themselves. 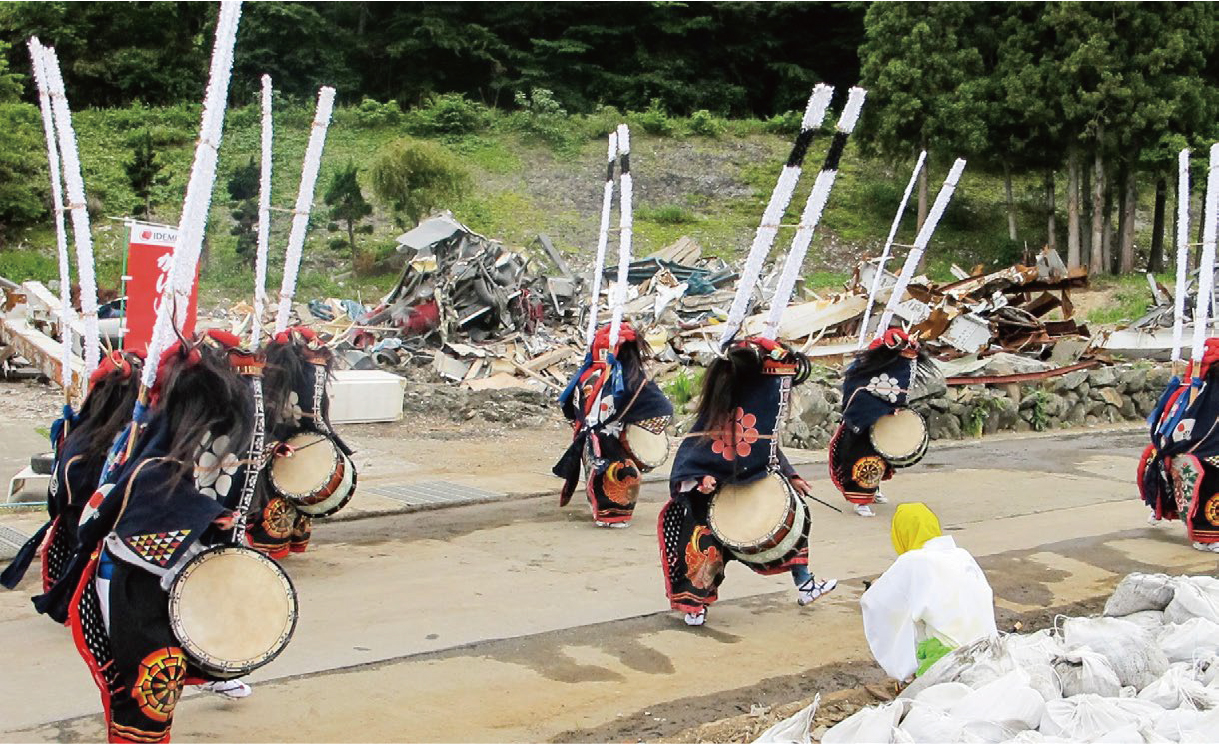 Kanatsuryu-urahama Shishiodori dance performing on the remains of the community hall with debris in the foreground (Iwate, Ohfunato, June 2011) © Satoru Hyoki

3.11 Disaster in Japan and Local Performing Arts
One of the salient features of the 3.11 disaster in Japan was the coverage and anthropological focus on local performing arts and festival events as symbols of the community’s recovery. One reason for this focus is the geography of small coastal communities with historical traditions; another is the religious function of performing arts in times of mourning. According to anthropologist Isao Hayashi, people who were affected by the tsunami and were living in evacuation housing acted in folk performing arts dedicated to the souls of those who lost their lives; these performances, which followed local Buddhist traditions, took place several months after the catastrophe on a particular prescribed date after the funerals of the deceased. 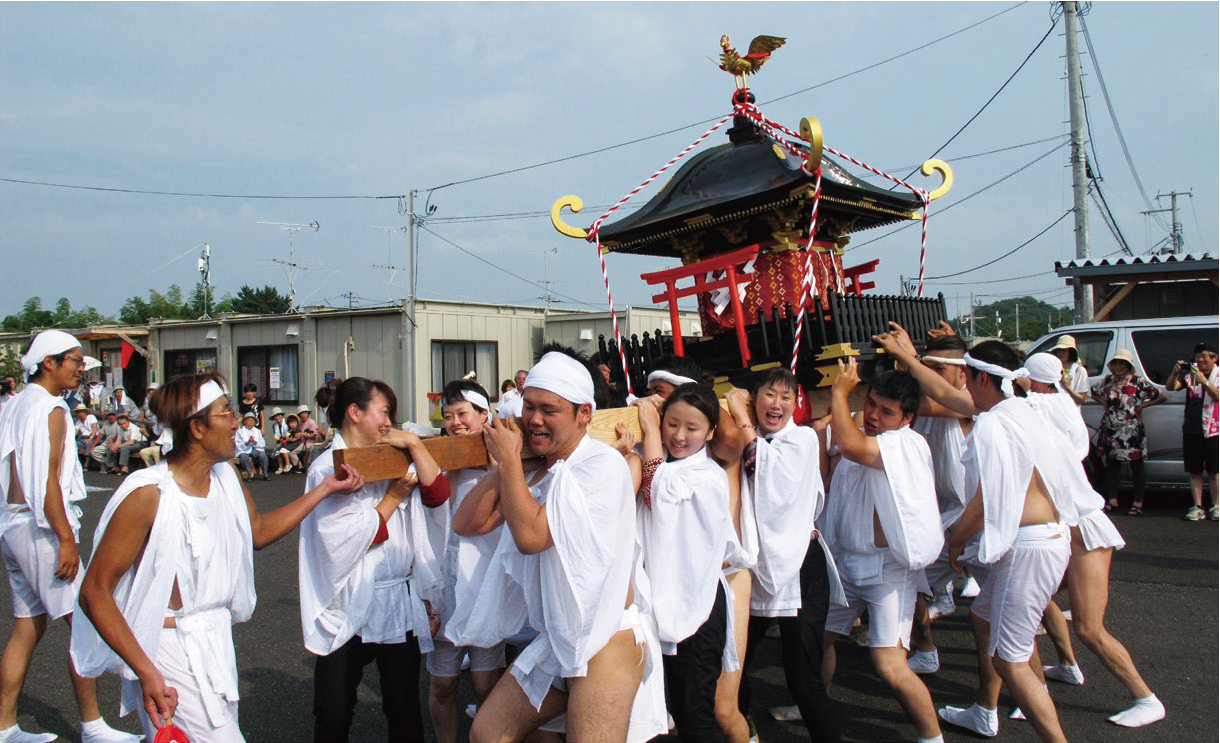 Dr. Akiko Iizuka and Dr. Florence Lahournat recognize the effects of ICH for the survivors’ psychological recovery and its integrative quality that contributes to identity and community formation while promoting ties with locals and non-locals, including disaster volunteers. Different scholars have described the effect of recalling an alternative time during emergencies. Survivors face unfamiliar difficulties as refugees; for instance, most also lose their livelihood.
One reason for these difficulties is that the government and NGOs force survivors to choose alternatives from a policy menu with an irreversible timeline. The sociologist Kyoko Ueda argues that festive events provide the concept of repetitive time and encourage participants to return to their pre-disaster sense of rhythm. Hiroki Takakura has also pointed out that rituals provide participants a sense of the structured historical-cultural depth of a given community.
They afford a new way of social cohesion going beyond the “here and now” that can renew existing social integration methods with the legitimacy derived from community-based traditions.
These studies suggest that ICH provides local initiatives, associations, and an alternative vision of the future for those in mourning. ICH mitigates the pain and predicament of survivors and enables them to recover social cohesion and collaboration, which is the unique contribution ICH can make to disaster risk  reduction. ICH is not omnipotent, but it is a powerful tool for evoking the initiatives of community-based sufferers. It is suggested that cultural policymakers, together with disaster policymakers, must consider the practical value of ICH for disaster risk reduction in local contexts.