In Pursuit of Safeguarding the Fading Memories of Bhutan

I still remember my grandmother sharing a story in which Norbu, a buffalo living in the southern plains, promised his friends he would bring salt from Tibet. To do so, he wanted all the furs of the other buffalo. So, he left with their fur, but once he reached Tibet he fell in love with the place and also found he was warm enough to live forever in the mountains. That is why the yak has a lot of fur. Meanwhile, the buffalo still gaze up to see if Norbu is returning with the salt. My grandmother shared such stories with me, and back then I took them as mere stories.
With time, I gradually understood that the stories my grandmother shared with me were ICH elements being transmitted to me so that someday I would be able to share the stories—such as the tale of Norbu, the buffalo who became a yak—with my children. However, the question is, how can we increase the outreach of these ICH elements and continue to preserve them from generation to generation?
I have been working for the Loden Foundation, a Bhutanese civil society organization dedicated to developing an enlightened and happy society through education, social entrepreneurship, and preserving the culture and traditions of Bhutan. I realized how committed the Loden Foundation was to preserving and passing on the unique cultural heritage of Bhutan by creating a comprehensive archive of oral and written cultures, thereby imparting ancient Bhutanese knowledge and wisdom across generations. The Loden Foundation has identified ten ICH elements of Bhutan that are on the brink of disappearing as time passes. To preserve records of these cultural traditions and raise awareness of them among the people, the foundation aims to make documentaries about these elements with support from ICHCAP. 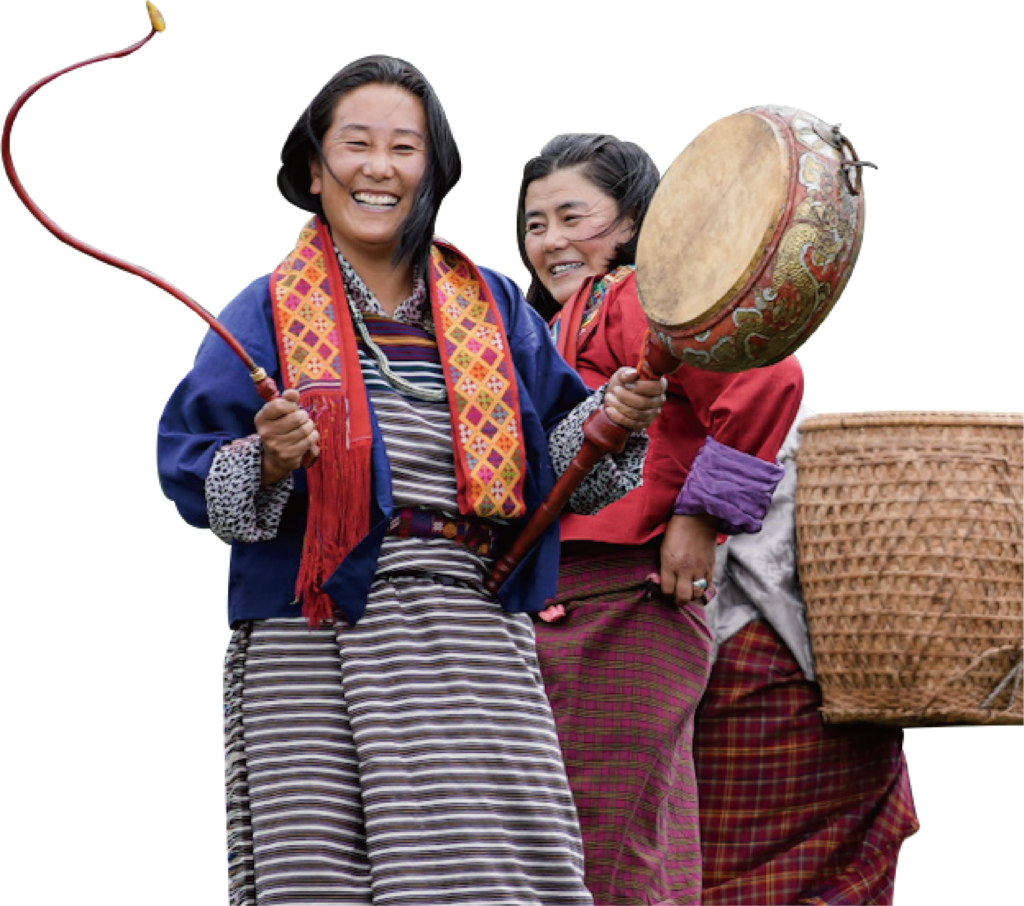 Ura women ascending Purshé Mountain while singing “Shomo Alélomo,” accompanied by Rinzin Tshomo’s drumming. The Sang ceremony and the Azhé Lhamo dance are cultural practices unique to Ura and the neighboring Shingkhar village. Both are entirely performed by local women, and they most certainly existed before Buddhism. In the spectacular festival, women take the lead during the entire ritual. However, the event has declined as most young women leave the area to attend school, college, or work © The Loden Foundation, Karma Jamtsho

One of the identified at-risk traditions is the Yaklha, an annual ceremony to propitiate the yak deity. This was celebrated even before Buddhism spread throughout Bhutan, most probably over a thousand years ago. It is fascinating to imagine how many Ura yak herders lived simple lives with their families and yaks in the lush green highlands, simply subsisting on the products of their livestock. However, the development of the nation has brought serious changes to the demographic and occupational culture to the extent that the Ura region has only one remaining yak herder, leaving both yak rearing practices and the cultural elements associated with yaks, such as the Yaklha ceremony, highly endangered.
There is little written on the Yaklha ceremony except for a short essay by Karma Phuntsho. The Loden culture team, which is dedicated to creating a documentary that would record lasting memories of the disappearing traditions, traveled to document the ceremony held among the last herd of yak that exists in Ura. I was honored to be part of the team sent to memorialize this dying culture using multimedia tools.
The entire ceremony was captured in 4K video format, with photographs of key scenes and interviews and recordings captured via personal communication. The team will upload these media on the Loden Foundation’s Cultures of Bhutan (CoB) website, a digital resource that the Loden Foundation is currently creating. CoB will include almost 3,270 hours of material documenting oral traditions such as folk tales, music, poems, narratives, jokes, languages, culinary recipes, farming techniques, social contracts, customs, and other types of intangible cultures.
Simply providing such information is not a successful strategy for raising awareness, particularly among the youth who are not aware of such cultures and tend to be deeply engrossed in social media. It is, therefore, important to leverage social media platforms such as Facebook, Instagram, and YouTube to promote cultures. Using such technological and media tools, it will be possible to raise significant awareness about Yaklha both within Bhutan and further afield. Our promotion of the awareness of Yaklha and the Sang ceremony in Ura through social media has been a testament to how we can sustain the awareness of ICH using technological and social media tools for storytelling. Our Facebook posts and pictures were shared a few hundred times within the first twenty-four hours alone and viewed by thousands of people.
Going further, I wonder at how fascinating it could be to experience the ICH recordings in virtual reality (VR), in which a narrator describes the element and the viewer can observe it virtually. With VR, we could actually bring the memories of our ancestors to life, albeit it as a digital avatar. As a young man reflecting on my cultural identity, I understand these cultures, traditions, and everyday practices and habits transmitted from our elders are essential for my wellbeing. The current generations have a responsibility as custodians of these ICH elements to guarantee that the knowledge and memory of these cultures and traditions are not lost and that we pass on this gift to our children. This way, the story of Norbu the yak and thousands of other tales can continue as a heritage element of humanity.