Reflection on the role of ICH as an element of countries’ soft power has developed in recent years (Schreiber 2017, Sargent 2020). While the soft power concept was coined in the Western Hemisphere by Joseph Nye, in the specific context of United States foreign policy in his 1990 book Bound to Lead, it has gained recognition worldwide and influenced cultural policies, programs, and diplomatic strategies in Asia, such as “Cool Japan,” “Incredible India,” and “Discover Korea, your way.”
The original concept of soft power communicates the message that State power is based not only on its economic and military potential (hard power), involving violence, coercion, and the ability to deter, but also on its attractiveness and its appeal to shared values. Nye states that a country’s soft power is based on three resources: its culture, its political values, and its foreign policy.2 As one of the pillars of soft power is culture, so is culture’s essential counterpart: cultural heritage, both tangible and intangible.
It is not surprising that states in the twenty-first century, aware of the prime role of their cultures for their international position, image, and reputation, have begun to take part in the “global race for soft power.”3 This notion is also connected with the popular concept of “nation branding.”4 The rankings of nation brands are thus created in parallel to soft power rankings; among the most recognizable in 2022 are the Elcano Global Presence Index (www.globalpresence.realinstitutoelcano.org/en/home), Nation Brands ranking (https://brandirectory.com/rankings/nation-brands), and Global Soft Power Index (https://brandirectory.com/softpower/). Nations are thus now equated with brands, as the title of the 2022 Global Summit of the International Advertising Association suggests: “Nations as Brands.”
These rankings use different methodologies to assess the position of states, so the data in Table 1 is only illustrative of the phenomenon of these type of rankings. Notably, however, only four Asian countries that are also States Party to the 2003 UNESCO Convention for the Safeguarding of the Intangible Cultural Heritage (hereinafter 2003 Convention)—China, Japan, South Korea, and India—are present in the top twenty countries in all rankings. From the perspective of ICH scholars, there are interesting metrics that come under the label “culture and heritage” present in the Global Soft Power Index 2022, comprising “influential in arts and entertainment,” “food the world loves,” “a great place to visit,” “rich heritage,” “an appearing lifestyle,” “leaders in sports.”

Table 1. Position of selected State Parties to the 2003 Convention from Asia in global soft-power and nation-branding indexes.

The 2003 Convention is widely considered an important platform for boosting countries’ soft power, bringing international attention to cultural traditions and practices. Thus, countries have focused on having as many important ICH elements as possible from their territories inscribed on the Representative List.
Exploration of the soft power concept has led to its critical reconceptualization. South Korean researcher Geun Lee suggested a new definition of soft power by making a distinction between hard resources and soft resources (e.g., ideas, images, know-how, education, culture, traditions, national symbols), rather than by differentiating between hard power and soft power as Nye did. Lee’s “resource-based theory of soft power” invites us to approach ICH as a resource used by states to achieve different soft power goals. Lee categorizes these goals broadly as: (1) soft power to improve the external security environment by projecting peaceful and attractive images of a country; (2) soft power to mobilize other countries’ support for foreign and security policies; (3) soft power to manipulate other countries’ styles of thinking and preferences; (4) soft power to maintain unity within a community or community of countries; and (5) soft power to increase the approval ratings of a leader or domestic support for a government.5 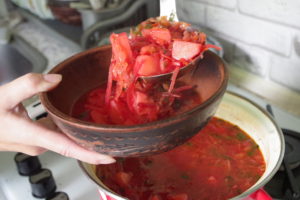 The conviction that ICH resources mainly create respect and appreciation, and enhance mutual understanding is widespread among ICH scholars and practitioners. These are also the objectives of the 2003 Convention. However, we also witness and discuss how states use their ICH resources to achieve soft power goals other than those officially communicated by them or foreseen by the 2003 Convention.
The latest inscription into the List of ICH in Need of Urgent Safeguarding as a case of extreme urgency, “Culture of Ukrainian borscht cooking” (2022), is a good example of strategic goals that were important for the Ukrainian government to achieve: reminding the international community of the ongoing war and mobilizing support for Ukrainian cultural identity, which is currently exposed to radical challenges. In practice, however, it is hard to imagine that borscht is threatened and needs urgent safeguarding, even taking the war into account. The dish is still being cooked, despite existing obstacles, also outside of Ukraine—indeed, it remains very popular not only in Ukrainian communities (e.g., in Poland it is one of the most popular and regularly consumed soups). Thus, its inscription is intended to sell an important symbolic and political message rather than the element actually facing real risk of extinction. We may see that, in this case, ICH is used as soft power resource “to improve the external security environment by projecting peaceful and attractive images of a country” (Lee’s first category) and “to mobilize other countries’ support for foreign and security policies” (second category).
In Asia, ICH is unofficially considered a “soft weapon” in countries’ cultural arsenal. It is used not only to influence the image of a country but also as a means to claim sovereignty and as reminder to others about symbolic “ownership” over specific cultural elements. The ICH nomination process is thus also a “message-selling” process intended to re-establish political alliances in the region or to support a state’s economic strategies, for example. Quite widely discussed examples of this include double inscription of traditions related to the bread lavash: in 2014 by Armenia, and two years later by Azerbaijan together with Iran, Kazakhstan, Kyrgyzstan, and Türkiye. Thus, lavash as a soft power resource was used by Azerbaijan “to maintain unity within a community of countries” (fourth category), sustaining alliance with them and as a reminder to Armenia (with which it is in a long-term conflict) that the element has more “owners.” 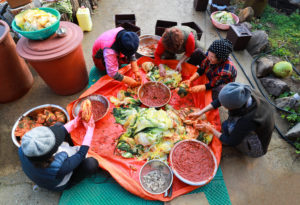 The importance of food heritage as a soft power resource can also be observed with the tradition of making kimchi, inscribed by South Korea in 2013 and in 2015 by North Korea. In this case, for North Korea it was important to be recognized as another “owner” over kimchi and “increase domestic support for the government” (fifth category). From the South Korean perspective, however, this ICH resource has a long-term, paramount economic importance: exports of kimchi surged by 10.7 percent year-on-year to $159.9 million in 2021. This figure surpassed the record-high exports of $144.5 million in 2020.6 This financial boost also shows how soft power resources such as ICH can translate into (hard) economic power. It also shows that the five defined categories of soft power goals are only exemplary and could possibly be extended.

Thus, for countries that have been constantly analyzing their place in various rankings in the world, the Representative List of the ICH of Humanity becomes—contrary to its initial premise—another such ranking, within which countries aspire to place high in terms of both quantitative and qualitative aspects. And ICH resources are used as important “cultural weapons” in the global fight for soft (and hard) power.
ICH as a tool for defining and maintaining identity locates itself inevitably at the heart of politics and international affairs. Two important components of hard power—economy and military—may easily connect with soft power, depending on the context. The existence of platforms of international discussion, knowledge-sharing, and networking such as UNESCO, as well as its regional centers such as ICHCAP, can be seen as an opportunity to channel and soothe possible tensions around it. Thus, when analyzing ICH and its role in creating soft power, we have to take overall, international, regional, and national context into account, in order to be able to understand, predict, and manage in a peaceful way possible political challenges, economic opportunities, identity struggles, and potential conflicts around it.