While Indigenous people represent 5% of the world’s population, it is estimated that Indigenous lands account for around 20% of global landcover, which contains 80% of the world’s remaining biodiversity.1
Many Indigenous communities have expressed concerns that modern-day environmental conservation and land management practices often conflict with their traditional ways of life. Regulations restrict their access to the land and natural resources that they have relied on for subsistence, medicine, and spiritual well-being, in many cases for generations. Unfortunately, Indigenous communities frequently do not have recourse to legal protection, particularly if they do not hold citizenship status. Moreover, Indigenous groups have also identified constraints in exercising various rights, including the right to move about freely and cultural rights to carry out and transmit Indigenous cultural practices either at an individual or community level. This has led to the erosion of cultural diversity, in some cases to the point of no return. When Indigenous and local knowledge related to natural resource management is lost, biodiversity may also be compromised as well.
The tension between protecting biodiversity and sustaining cultural diversity associated with Indigenous communities is an ongoing issue around the world. Since the landmark 2003 World Parks Congress in Durban established a “new paradigm” for governing protected areas, there has been an increased recognition of the rights of Indigenous peoples and local communities. These inclusive, rights-based principles are being embedded within global statutory frameworks, yet challenges still remain in translating them into national mechanisms and local practice.

Linking Biodiversity to Cultural Diversity
Areas of high biodiversity are often correlated with high cultural diversity, reflecting a symbiotic relationship between these two processes. UNESCO and the Secretariat of the Convention on Biological Diversity have promoted a better understanding of the relationship between biodiversity and cultural diversity as well as their connection to social and economic development. In addition, they have also advocated for safeguarding biodiversity and cultural diversity as a way of building resilience against natural and human-induced changes.
The connection between cultural and natural heritage is echoed in the 2003 Convention for the Safeguarding of the Intangible Cultural Heritage.2 In its preamble, the 2003 Convention acknowledges the “deep-seated interdependence between the intangible cultural heritage and the tangible cultural and natural heritage.” Due to this interdependence, Article 14(c) calls for promoting “education for the protection of natural spaces and places of memory whose existence is necessary for expressing the intangible cultural heritage.” In the meantime, “knowledge and practices concerning nature and the universe”, defined as one of five domains of ICH that should be safeguarded (Article 2(d)), is often vital to traditional forms of natural resources management. 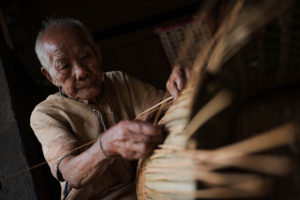 The Role of Indigenous Communities in Safeguarding Biodiversity and Cultural Diversity
In terms of safeguarding living heritage, the 2003 Convention especially underscores the role of Indigenous communities. It notes that
communities, in particular indigenous communities, groups and, in some cases, individuals, play an important role in the production, safeguarding, maintenance and re-creation of the intangible cultural heritage, thus helping to enrich cultural diversity and human creativity.
This role of Indigenous peoples in sustaining the dynamic relationships between cultural and natural heritage is also recognized in the 1972 Convention concerning the Protection of the World Cultural and Natural Heritage (hereinafter World Heritage Convention).3 In paragraph 90 of the Operational Guidelines for the implementation of the World Heritage Convention, it is noted that for natural World Heritage properties,
it is recognized that no area is totally pristine and that all natural areas are in a dynamic state, and to some extent involve contact with people. Biological diversity and cultural diversity can be closely linked and interdependent and human activities, including those of traditional societies, local communities and indigenous peoples, often occur in natural areas. These activities may be consistent with the Outstanding Universal Value (OUV) of the area where they are ecologically sustainable.4
The Operational Guidelines call for communities to be recognized as key actors in the process of identification, management, and sustainable development of heritage sites, through consultation and with their free, prior, and informed consent.

Other International Statutory Frameworks
Beyond heritage, other international statutory frameworks also uphold the rights and role of Indigenous communities and the importance of safeguarding their ways of life and their connection to the environment. In the 1992 Convention on Biological Diversity, Article 8(j) states that the contracting parties to the convention shall:
Subject to national legislation, respect, preserve and maintain knowledge, innovations and practices of indigenous and local communities embodying traditional lifestyles relevant for the conservation and sustainable use of biological diversity and promote their wider application.5
Meanwhile, the 2007 United Nations Declaration on the Rights of Indigenous Peoples (UNDRIP) emphasizes that Indigenous peoples have the “right to the conservation and protection of the environment and the productive capacity of their lands or territories and resources” (Article 29).6 This includes the “right to maintain and strengthen their distinctive spiritual relationship with their traditionally owned or otherwise occupied and used lands, territories, waters and coastal seas and other resources” (Article 25). UNESCO has translated the principles of UNDRIP into its 2018 Policy on Engaging with Indigenous Peoples, which ensures “ways and means of ensuring participation of indigenous peoples” across its various programs, including heritage.7
On the issue of climate change, the Paris Agreement (2015) states:
Parties acknowledge that adaptation action … should be based on and guided by the best available science and, as appropriate, traditional knowledge, knowledge of indigenous peoples and local knowledge systems (Article 7.5).8 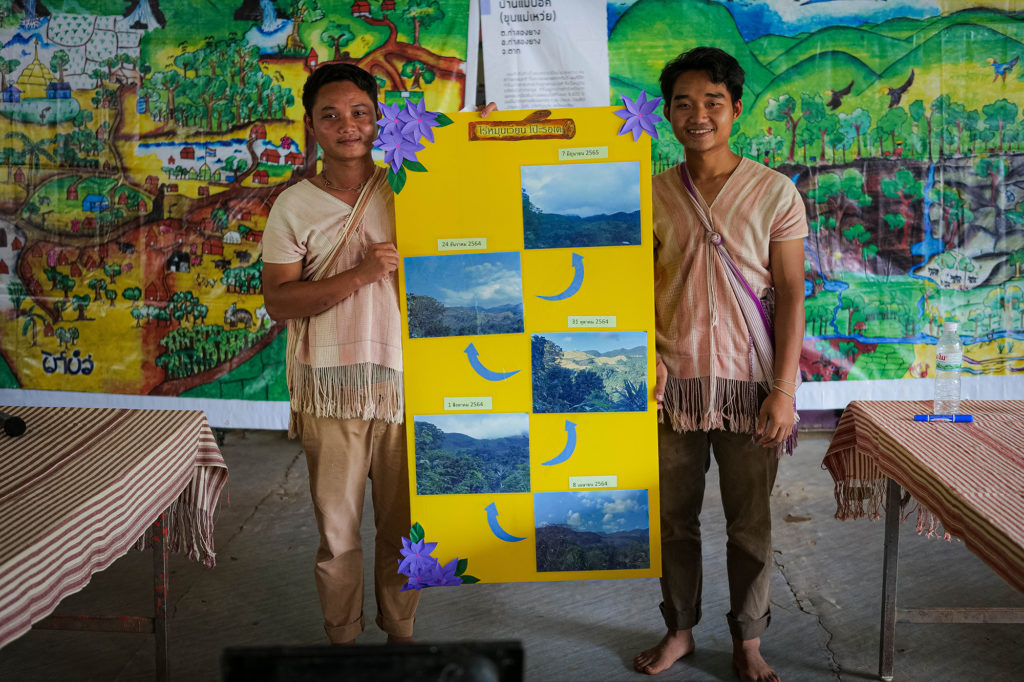 Contributions to Sustainable Development
Inclusive governance models that integrate Indigenous knowledge and management systems with outside stakeholders and other knowledge systems have been shown to lead to sustainability across a range of dimensions.
The interrelated role of biodiversity and cultural diversity in contributing to sustainable development and human well-being is embedded in the United Nations Sustainable Development Goals (SDGs). The planetary protection goals include Target 11.4 related to safeguarding cultural and natural heritage, as well as SDGs 14 and 15 related to environmental protection both in water and on land, respectively. Traditional knowledge can also contribute to climate change adaptation under SDG 13. At the same time, biodiversity and cultural diversity have also been identified as essential for other dimensions of human well-being. Local and Indigenous knowledge can contribute to sustainable agricultural practices and food security under SDG 2. Cultural know-how, such as local medicinal practices, can support better health under SDG 3. An appreciation for cultural diversity, as manifested in heritage, contributes to attaining quality education under SDG 4. 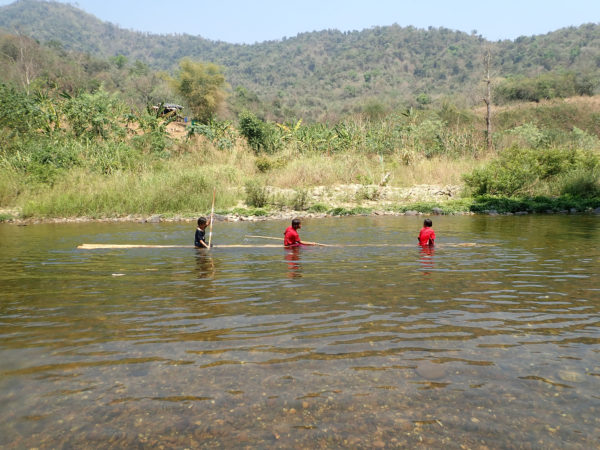 Thailand Case Study
Ethnic minorities account for over 9% of the population of Thailand, and they are gaining greater recognition in terms of heritage protection as well as sustainable development.
In 2016, Thailand promulgated the Promotion and Safeguarding of Intangible Cultural Heritage Act and also ratified the 2003 Convention. Subsequently, various forms of living heritage associated with ethnic minority groups have been included in the national ICH inventories across six domains. Significant ICH items of particular relevance to sustainable development and heritage management in a holistic approach are ku-chuei (Karen rotational farming) and kabang (a traditional Moken houseboat). Both of these practices reflect the inseparable tie between cultural heritage and sustainable natural resource use.
The updated 2019 National Parks Act and the Wild Animal Conservation and Protection Act both have provisions to facilitate traditional ways of life. For instance, it permits the “collection or exploitation of seasonally renewable natural resources” so long as it is “in accordance with the type, kind and quantity to which the permission relates and for the purpose of regular subsistence”.
Finally, the drafting of various laws related to ethnic groups is now underway, which promises to strengthen the legal protection and promotion of their rights, way of life, and role in society at large. The draft laws include provisions for:

• Setting up the representative bodies at the national and sub-national levels.
• Promoting and safeguarding ICH and customary practices of land and management of natural resources.
• Setting up Special Cultural Zones where ethnic groups can carry on their traditional ways of life.

These draft laws constitute a milestone for Thailand as it is the first time there has been an effort from various sectors of civil society and the elected government to enact legislation for the sake of ethnic minority groups.

UNESCO Policy Brief
Building on this momentum, UNESCO Bangkok Office published a Policy Brief on “Ethnic Communities and Sustainable Heritage Management in Thailand” on 9 August 2022, the annual International Day of the World’s Indigenous Peoples.9 The brief undertakes a review of the existing policy landscape and suggests ways to more effectively link heritage management with sustainable development in the context of the country’s diverse ethnic communities. It puts forward two main lines of recommendations related to: (i) strengthening the legal and regulatory system to enable more meaningful involvement of ethnic communities in contributing to sustainable heritage management; and (ii) building the capacity of ethnic communities, especially youth, to be involved in sustainable heritage management.
UNESCO is now working with Thai partners to build capacity among ethnic communities, conservation practitioners, and local authorities. Cultural mapping is now underway with two Karen communities in World Heritage forests, with support from the Ophidian Research Institute and Michigan State University. This will lay the foundation for an initiative to launch the Field School for Capacity-Building in Safeguarding Living Heritage of Ethnic Communities as a platform for exchange and transmission between the five ethnic groups involved, namely Pgakenyaw Karen, Pwo Karen, Moken, Moklen, and Urak Lawoi, which will be the first international assistance received by Thailand under the 2003 Convention.