Yeongdeunggut on Jeju Island
Jeju Yeongdeunggut is a shamanic ritual performed during the second lunar month to greet and see off the goddess Yeongdeung. Yeongdeung, the goddess of wind, is typically recognized in the form of Yeongdeunghalmang (Grandmother Yeongdeung). In winter, when the cold wind blows from the northwest, she brings prosperity to the land and sea. It was the custom for the Yeongdeung Welcoming Ritual to be performed to celebrate her arrival and the Yeongdeung Farewell Ritual to be performed fifteen days later to mark her departure.
In today’s Yeongdeunggut ritual, greater significance is placed on the farewell rite than the welcome. On Jeju Island, the Yeongdeunggut rites are mostly practiced between the twelfth and fifteenth days of the second lunar month.
People turn to Yeongdeunggut to offer prayers for safety at sea and bountiful fishing yields for fishermen and female divers (haenyeo), mainly in some coastal villages of Jeju Island, where this ceremonial tradition has remained relatively intact.
This shamanic ritual, in times past, took place throughout Jeju as islanders prayed for prosperity in farming, fishing, and other livelihoods. It is closely linked to the ritual day at bonhyangdang, shrines dedicated to village guardian deities. With the passing of several eras, however, the role and function of Yeongdeunggut have increasingly diminished or even disappeared other than in coastal communities. In recent times, Yeongdeunggut has become known for its distinctiveness from danggut, which is conducted at village shrines, and in some cases it has expanded into a community ritual, as much traditional heritage of the past has disappeared. 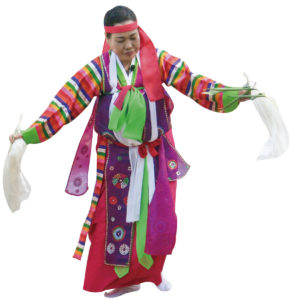 Yeongdeunggut consists of two main ceremonies—chogamje and yongwangmaji—in addition to other observances such as jidrim, ssidrim, ssijeom, aengmagi, seonwangpuri, and baebangseon. Chogamje, a ceremony to summon multiple gods, accounts for the first half of the ritual, while yongwangmaji, a key part of the second half, is a rite to greet and offer prayers to Yongwang, the Dragon King who presides over the sea, and Seonwang, the Lord of Boats.
During jidrim, pieces of several sacrificial offerings are torn, collected in the white traditional Korean paper hanji, packed with great care, and then thrown into the sea as a treat for Yongwang and the lonesome spirits of the drowned (sujunggohon). Ssidrim is a shamanic practice in which haenyeo roam around the sea and sprinkle millet seeds, praying for a bountiful fishing yield. Ssijeom is a ceremonial fortune-telling process to determine how well the seeds have been sown and whether many fish will be caught. Ssidrim and ssijeom are ultimately components that symbolize prosperity as the shared goal of the communal livelihood. Aengmagi is a rite to tell fortunes for the New Year and ward off bad luck.
Lastly, seonwangpuri and baebangseon are the final steps that venerate and send Seonwang on his way by floating a miniature boat out to sea.
Yeongdeunggut can be viewed as a communal shamanic ritual that has the closest link to the community’s livelihood. It is a part of the religious and spiritual culture practiced by Jeju islanders, who seek to understand and adapt their lives to the wind that dominates the island. In addition, it also represents their devout mindset to venerate deities when they resume their farming or fishing work in the New Year. A representative case that offers insight into the practice of Yeongdeunggut is Jeju Chilmeoridang Yeongdeunggut.

Jeju Chilmeoridang Yeongdeunggut
Jeju Chilmeoridang Yeongdeunggut is a shamanic ritual held at Chilmeoridang, the communal shrine located in Geonip-dong, Jeju. Geonip-dong is a coastal village in northeastern Jeju that was formed around the port of Geondeulgae and the Sanjimul spring water. The villagers of Geonip-dong primarily lived on subsistence farming and fishing, with its main livelihoods consisting of fisheries and muljil (underwater harvest work) by haenyeo.
Chilmeoridang is Geonip-dong’s bonhyangdang, a village tutelary shrine. The ritual site is level and relatively spacious, with no special facility other than three rocks regarded as spirit tablets, encircled by a stone wall. Chilmeoridang was initially situated on the side of a coastal hill called Chilmeori, on top of a plateau that overlooks the ocean with the wall surrounding it. It was later relocated to the east of the current Sarabong due to expansion work on the Port of Jeju and the development of neighboring areas.
Chilmeoridang worships the husband-and-wife deities Dowonsugamchaljibanggwan and Yongwanghaesinbuin.
According to dangsinbonpuri (Song of the Origin of the Village Guardian Deity), the god who rose from Gangnamcheonjaguk (Empire of the Son of Heaven) was an unrivaled military commander who made a significant contribution to his country in bringing a war to an end. He then entered Yongwangguk (the Dragon Kingdom) and married Yongwanghaesinbuin, later arriving on Jeju Island and being seated as the god of the Chilmeoridang. He presides over all matters regarding the villagers, including their lives and livelihoods. Yongwanghaesinbuin is the guardian of the village’s haenyeo, fishermen, and descendants living in other provinces. Meanwhile, in addition to these two, Chilmeoridang also enshrines Yeongdeungdaewang (Great King Yeongdeung), Haesinseonwang (Lord of Boats, God of the Sea), Namdanghareubang (Grandfather Namdang), Namdanghalmang (Grandmother Namdang), and other deities related to the sea. Their names are memorialized on three rocks to be used as spirit tablets, each bearing inscriptions of the names of two deities.
The ritual is held on the first and fourteenth days of the second lunar month. Today, the Yeongdeung Welcoming Rite, a relatively small affair, is performed over a half-day on the first day at the fishery market run by the National Federation of Fisheries Cooperatives in Jeju. A Confucian-style bountiful fishing ritual is also performed during the event. In contrast, the much larger Yeongdeung Farewell Rite is held at the shrine with multiple ceremonial events that take place throughout the day.
In 1980, Jeju Chilmeoridang Yeongdeunggut was designated National Intangible Cultural Heritage No. 71. It was initially designated under the name of Jeju Chilmeoridang Gut at the time, before being renamed as Jeju Chilmeoridang Yeongdeunggut in 2006 as part of the effort to clarify its meaning. Its practitioner was the late simbang (senior shaman) Ahn Sa-in, who was succeeded by simbang Kim Yun-su. Meanwhile, Jeju Chilmeoridang Yeongdeunggut was also inscribed on the UNESCO Representative List of the Intangible Cultural Heritage of Humanity. An island blessed with a beautiful natural environment, Jeju was also consecutively designated by UNESCO as a World Natural Heritage and a Global Geopark.
The value and potential of Jeju folk culture, which has survived through understanding and adapting to its natural environment throughout history, are acknowledged all over the world. In this regard, Yeongdeunggut has proudly placed its name on the UNESCO Representative List for the benefit of future generations.