From early on in her life, Shyam Badan Shrestha was an inquisitive child, always eager to learn new skills. She became a science teacher in 1968 and, as part of her extracurricular activities, she taught craft skills to the children. Browsing through the school library one day, Shyam stumbled on a macramé book and eventually taught herself to produce knot craft items. She later introduced the craft to the Nepalese marketplace after she left the teaching profession in 1980. Her continued interest in macramé blossomed into an enterprise, the Nepal Knotcraft Centre. Thanks to her passion, macramé became a popular craft in Kathmandu during that time.
In the 1990s a trade embargo was imposed between Nepal and India. For thirteen months, imported cotton cording used for macramé production was unavailable. Not to be deterred, Shyam searched for a local substitute to continue supporting the Nepal Knotcraft Centre, which by that point had fifty producers. Her country-wide search led to a treasure trove of native plants traditionally twisted into cords by skilled village women for their weaving needs.
Shyam had stumbled upon Nepal’s ancient cultural tradition of weaving and a wide range of beautiful items produced by many ethnic hill groups. This discovery inspired Shyam to further investigate the possibilities for expanding her interest beyond macramé to include natural fiber and weaving development. Since then she has been totally engrossed in fiber craft development to empower women in their role as income generators.
Shyam continued to explore local skills and native plant fibers in different communities and studied the local techniques of weaving, knotting, and coiling. She was particularly inspired by women from the hillside in Kathmandu who wove sukul mats from rice straw to cover mud floors. Rice mats are thin and easily collect dust. They also wear out faster. Rice straw is also valuable as animal feed. In comparison, Shyam realized that the Newar counter-twine method of mat-making was more durable; the material is thicker and very compatible with other forms of fiber like cardamom, papyrus, and cattail, all agricultural waste materials. Shyam could foresee the practical and economic advantages to the community that would come from introducing counter-twine weaving. Collective innovation would increase weaving skills, add value to their product, recycle agricultural waste, and advance weaving to a higher level that would generate more income.
Counter-twine weaving is well known in the contemporary world. Convinced that this innovation would be a great benefit, in 2001 Shyam organized a skills training program in one of the villages in the Terai. She taught women how to counter-twine weave to make sukuls. Women in the Terai region make local mats called chatai using papyrus plants, known locally as pater. This plant is found on marshy land and river banks. The fiber is soft and long, meaning the weaving process is quicker and the product softer and smoother. Transferring the relevant skills to communities was challenging, but the practice slowly spread to many villages and people started valuing the new ideas and skills. Today, this skill contributes a significant portion of income in many village households.
Growing interest in craft revival initiatives were helping village women to contribute to family income. Shyam was well prepared and fully motivated to participate in this movement to recognize the role women play in the world economy. She discovered massive amounts of cardamom in the mountains and experimented with the material for weaving and found that it was an excellent fiber to use for many products. In 2007 she taught the Newari skill to women in Dhankuta, Taplejung, and Lamjung, the hill districts of Nepal. Here, the farmers produce tons of cardamom as spice for export to other countries. Previously, the seemingly valueless agricultural waste would be thrown in the river, where it would rot slowly. Now utilitarian products are made with the plant. For many groups, this discovery opened pathways to income-generation activities and related environmentally friendly enterprises.
Recycling not only gives value to agricultural waste, it creates enterprises that are sustainable as long as markets, technology, and designs go hand in hand with development. Weaving is not just an activity, it’s a cultural and traditional part of village life that needs to transition to the realities of a competitive world in order to survive. Without awareness of market and design trends, sustainability is threatened. Shyam’s craft training and promotion included the importance of sustainability and stressed that crafts “are a major form of cultural identity.” The transfer of Newari counter-twine weaving using different raw materials found in Nepali villages has contributed to increased income; now this technique is acknowledged in the countryside as the “Kathmandu weave.”
The current international cross-cultural appreciation for woven products represents a huge opportunity for Nepal to show the world how talented and resourceful its village women are. Weaving has great potential to enhance the rural economy and to empower women to take their place in business, design, and technical innovation. Kathmandu weave has created a strong relationship between nature, culture, and Nepali communities.  n 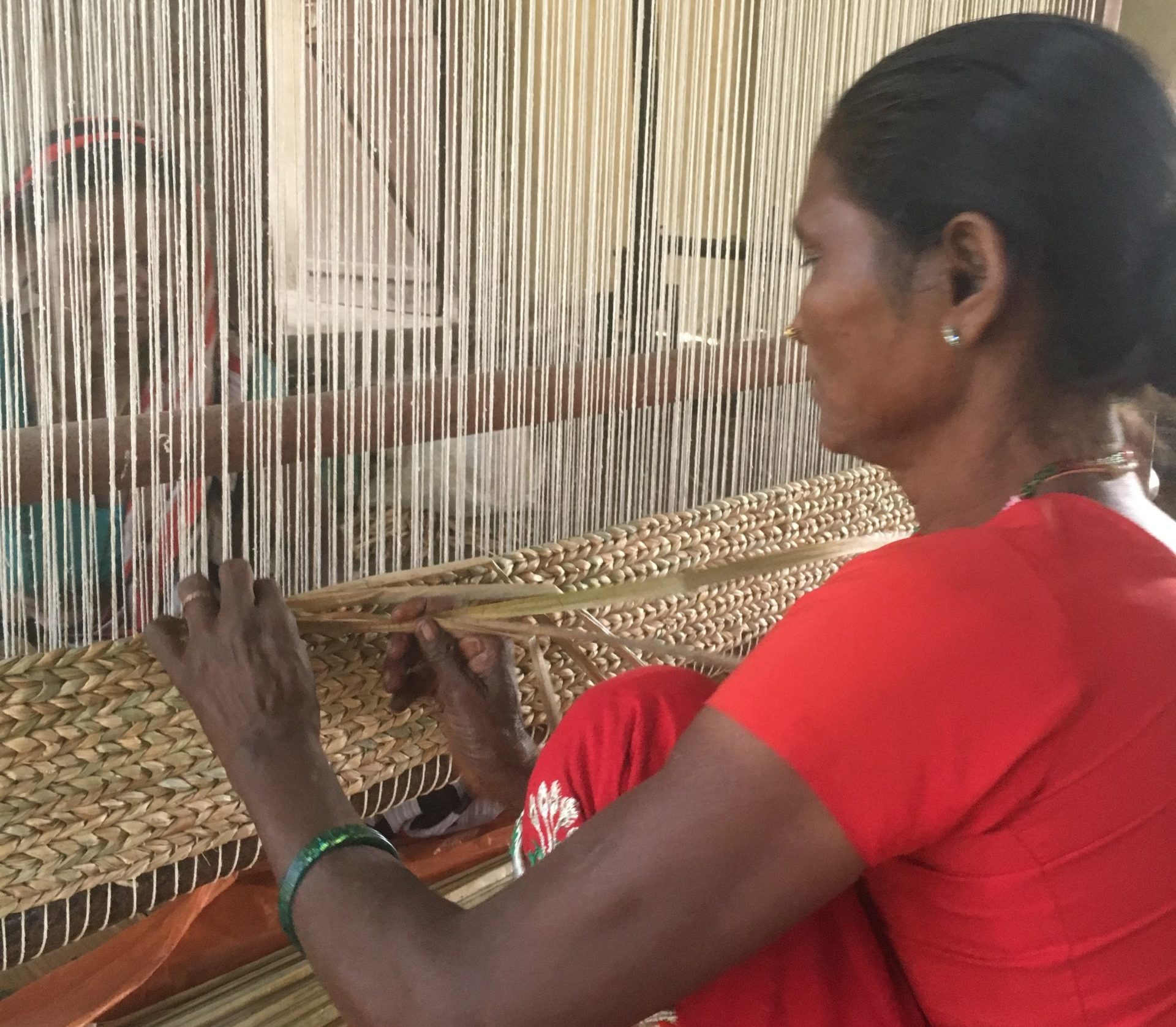 NOTES
1. G. P. Vasilyeva, “Species of the women’s folk arts of Turkmen (their role in interethnic contacts)”, Journal of Ethnographic Review, Institute of Ethnology and Anthropology of the Russian Academy of Sciences. The author generalizes data on the folk arts that she collected during her expeditions to Turkmenia in the 1940s.