The Kasteyev State Museum of Arts in Almaty has gathered a unique collection of Kazakh jewelry made during the eighteenth through twentieth centuries. These examples vary in form, type, and technique. The distinctive features commonly found on Kazakh jewelry make them true masterpieces which reflect a specific philosophical understanding of the world and demonstrate the great artistic abilities of the Kazakh people. Indeed, every element that comprises an individual piece of Kazakh jewelry, including its form, details, the material it was produced from, and patterns, has a specific purpose and meaning.
Kazakhstan’s abundant supply of nonferrous and precious metals, including gold and silver, encouraged the development of its metalwork for millennia. Casting, forging, molding, stamping, and embossing techniques emerged as early as the second millennium BC, during the Bronze Age, as did signatory traditional designs for jewelry worn by the Kazakhs both historically and today. Saka treasures discovered in different areas of Kazakhstan—the Issyk Kurgan and the Besshatyr, Kargaly, Altyn-Emel, Tagisken, Uigarak, and Berel burials—are true masterpieces.
By studying jewelry, scholars can discern a great deal of important social, economic, and cultural information about the people who wore them. The style of jewelry changed during the Migration Period when the Huns moved westward from 47 BC until the fourth century AD. Artisans applied fine metalwork to nearly all objects where metal was used, from jewelry and household items to harnesses.
Jewelry was in high demand among all social groups for its aesthetic value, and for its functions within customary practices, social ceremonies, and religious beliefs. Jewelry was also believed to possess magical abilities. For this reason, it was actively used in rituals and ceremonies, including customary gift-giving, not only for celebrations (such as weddings) but also to mark other occasions as well. People exchanged gifts as a sign of sworn patronage and friendship; examples include welcoming new guests into homes with gifts; giving gifts to persons who share good news (suiynshi); and on the occasion of encountering novel or new things (baigazy). 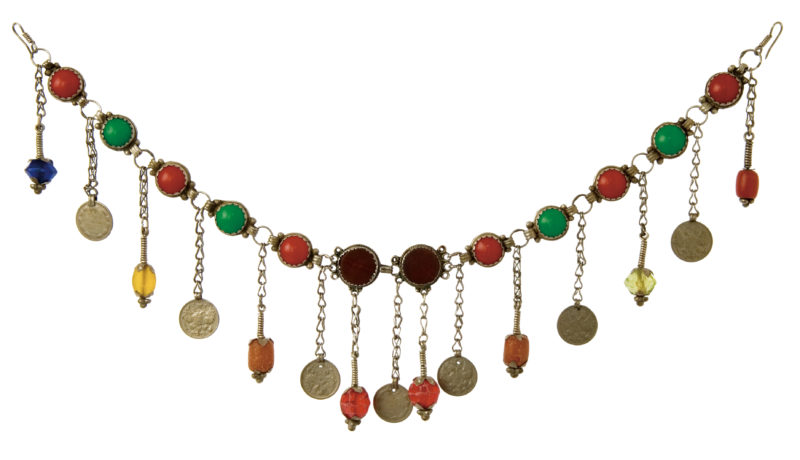 Kazakh jewelry is exemplified by its decorative diversity and aesthetically pleasing impression, notably during the eighteenth through twentieth centuries. Some examples of Kazakh jewelry are austere, while others embrace colorful palates and ornate additions. The pieces include massive bracelets, rings, temple pendants, earrings, braid adornments, the onirzhiyek three-tier chest decorations, and the kudagi zhuzik matchmaker’s rings with a setting in the form of the solar circle and two shanks. Jewelry from southern and central Kazakhstan features elements of the Scythian and Saka polychrome style. It is characterized by a multipart composition and a host of elegant coin pendants and insets of carnelian.
In addition to having a decorative function, stone insets and pendants in Kazakh jewelry were regarded as a “guarding eye.” These were most often made of carnelian, coral, turquoise, or colored glass. Each stone had a specific function and was believed to have magic and healing properties. For example, carnelian was believed to protect against all dangers, including accidents and natural disasters. Corals were regarded as promoting wellbeing and fertility (usually placed within pendants).
Color plays a crucial role in the protective abilities of a piece of jewelry as well. Turquoise was believed to bring happiness and luck. Turquoise jewelry also had the ability to communicate the specific emotions of the person wearing it at a given moment. For example, if worn by someone of ill health, the stone would change color and darken. Red is an especially powerful color capable of emoting multiple meanings. Red is the color of a clan’s blood. It can also be a symbol for fire, energy, the sun, and warmth.
Northern Kazakhstan jewelry is very diverse, the compositions and decorations of the pieces echoing ancient beliefs such as shamanism and totemism. Of special interest are the uki ayak temple pendants where eagle-owl claws were mounted in silver. The Kazakhs worshipped the eagle-owl, the golden eagle, and the common eagle as “the birds of the sun” and their claws were talismans to ward off the evil eye.
In Eastern Kazakhstan, of special popularity were bracelets with a round cross-section, known as zhumyr blezik. Bracelets of this form were discovered in ancient Bronze Age burials. Some commonly held beliefs in the past were that wearing bracelets helped to prevent joint diseases, made the arms and hands clean, and warded off evil, but—most importantly—they were believed to retain one’s life force. Kazakhs believed that if an evil spirit could enter a woman through her ears or hair, her energies would gradually drain away through her palms. For this reason, older women who feared losing their strength wore bracelets at all times, as circular objects in particular were effective as protective symbols. This belief also explains a frequent practice of placing bracelets made of black and white (or red and blue) beads onto a child’s arm. Crescent earrings (ai syrga, shuzhik syrga) were ancient amulets protecting against devilry. When a woman put ornate earrings into her earlobes, she was told, “Let your ears hear nothing bad and let your face be pretty.” 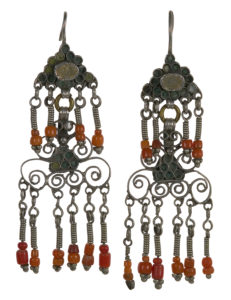 Preservation and Continued Interpretation of Kazakhstan’s Metalwork and Jewelry
For contemporary Kazakh jewelry and craft to continue to thrive, we must be stewards of our own cultural heritage through research and preservation, while fostering opportunities for cultural exchange with other nations. Just as modern artists draw inspiration from one another, so did past examples of Kazakh jewelry flourish through the exchange of ideas outside of its borders. Many Kazakh ancient motifs, techniques, and patterns were derived from Turkic stylings. Kazakh artisans of the past would adopt these motifs and add to them new designs and meanings.
Kazakh jewelers (zerger) have preserved the centuries-long traditions of the nomadic material culture, but also participated in new creative movements within their own craft. The best pieces in the collection of the Kasteyev State Museum of Arts and other museums in Kazakhstan demonstrate an original style and represent a significant contribution to Kazakhstan and the wider world. The healthy exchange of creativity and ideas that exists within craft jewelry production today demonstrates that Kazakh jewelry is well positioned to continue flourishing into the future. The community of talented metalworkers and jewelers in Kazakhstan will continue to preserve important cultural traditions of nomadic communities, while providing new interpretations that further enrich the practice. n