Kimchi Refrigerators, a Journey to Find the Flavors of a Millennium

The consumption of vitamins and minerals is essential to endure the harsh winters of Korea. Today, we can easily buy fresh vegetables at a supermarket, even in winter. But in times before greenhouses and imported agricultural products, how did our ancestors obtain vegetables? In the past, people salted vegetables in the autumn and consumed them through midwinter until the following spring. The famous Korean dish kimchi, made using a fermentation method, is a representative example of these preserved vegetables. 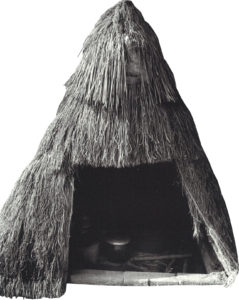 A kimchi gwang (shed) was usually installed behind the kitchen, mainly in Gyeonggi and Chungcheong provinces. The gwang was shaped like a simple house with a straw-woven door on the front to make it easier for users to go in and out.
© Kim Ki-chan (Asia Culture Center)

Fermented vegetables not only serve their original purpose of preparing for the winter but they taste great as well. And the key to their delectable flavor traditionally was the use of kimjangdok, a traditional Korean earthenware crock used to preserve kimchi. Storing salted vegetables such as napa cabbage or white radish in a sealed kimjangdok, after they are seasoned with various ingredients including chili pepper, garlic, scallion, ginger, and jeotgal (salted seafood), triggers microorganisms to begin the fermentation process by allowing lactic acid bacteria to grow. The lactic acid bacteria grow slowly, generating lactic acid, which is responsible for the unique taste and sour smell of kimchi. The pungent flavor of well-aged food after a long period of fermentation is described as gemi-itta or gemi-jida in the Honam region of Korea. These expressions mean that kimchi or jeotgal has been fermented just right and thus has a rich flavor.
The use of kimjangdok embodies the wisdom of Korean ancestors. In the fermentation process for kimchi, carbon dioxide is produced from the fermentation of lactic acid bacteria, and the kimjangdok releases an appropriate amount of the gas from the crock while allowing some of it to dissolve in the kimchi brine. This process is made possible by the pores in the crock, which allow it to breathe. Air and microorganisms pass through the pores, helping control the activities of microorganisms and facilitate the fermentation process inside the crock. That explains why kimjangdok can be used to preserve fermented food for a long time, allowing the contents to age without decomposing.
In recognition of the excellence behind this traditional knowledge, kimchi was added to the UNESCO List of the Intangible Cultural Heritage of Humanity in 2013, specifically as “Kimjang: Making and Sharing Kimchi.” UNESCO inscribed it as ICH, acknowledging the contribution made by kimjang towards strengthening cooperation and solidarity among families and neighbors in Korean society. Today, kimchi is an iconic food to the extent that most people regard Hangeul and kimchi as representative cultural elements of Korea.
This love for kimchi led to the advent of special refrigerators designed solely for the popular dish. Kimchi refrigerators, which arguably carry on the tradition of kimjangdok, were invented as a unique form of household appliance only seen in Korea. The first kimchi refrigerator ever invented was the GR-063, launched in 1984 by GoldStar (now LG Electronics). In those days, single-family homes still comprised the most common form of housing and thus people still widely used kimjangdok in the yard of their homes, which meant that kimchi refrigerators failed to attract sufficient demand. In 1995, however, the Dimchae (CFR-052E), manufactured by Mando Machinery, became a huge success and popularized kimchi refrigerators. The name dimchae is an archaic word for kimchi, used in the sixth year of King Seongjong’s reign (1475) in the Joseon Dynasty. 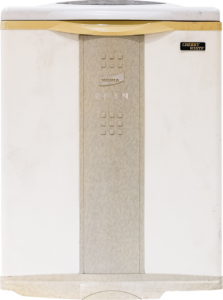 An earlier model of kimchi refrigerator the Dimchae, which was successful in the market (collection of Design Korea Museum). © Asia Culture Center

Consumer demand for the Dimchae exploded due to the apartment boom in Korea at the time, though the quality of the product also played a part. As apartments were increasingly replacing single-family houses, more and more people no longer had the space in their residence to store kimchi crocks, which created the need for a refrigerator specifically designed to store kimchi. Moreover, kimchi begins to sour too quickly in a conventional fridge, and the odor of kimchi often clings to the entire space inside the appliance. In order to address these inconveniences, the special kimchi refrigerator was invented, with deodorization systems, to meet the kimchi fermentation and storage requirements. According to the industry (as of 2018), the market for kimchi refrigerators in Korea exceeds KRW 1.5 trillion a year, with about 1.2 million sets sold annually.
Kimchi must be fermented for two to three days at 15°C immediately after being made and then stored at an appropriate temperature for two to three weeks to ripen and develop its delicious flavor. Lactic acid bacteria, which as noted is the most important factor for making tasty kimchi, activates at -1°C. A kimchi refrigerator simulates the core functions of a kimjangdok using modern technology. In the past, Korean ancestors had to find a suitable place for ripening kimchi, digging a pit of an appropriate depth to bury the crock in order to maintain constant conditions, since this was an essential part of ensuring flavorful kimchi. Burying the crock in the ground prevented kimchi from either freezing in sub-zero temperatures or souring too quickly in warm temperatures. The purpose of the kimchi refrigerator is to ensure a stable environment, similar to a crock buried in the ground, as temperature detection sensors inside the fridge keep the temperature constant. A kimchi refrigerator must maintain its temperature at -1°C, at which kimchi retains its optimal taste while suppressing the excessive growth of lactic acid bacteria, as excessive bacteria can result in kimchi that tastes too sour.
While the main function of a regular fridge is to prolong the freshness of food, modern kimchi refrigerators are built with software that can control the fermentation and storage of kimchi by automatically adjusting the temperature. For example, there is even a sensor dedicated to measuring air bubbles produced during fermentation, as a way to detect the extent of ripening. The technology was patented as “Fermentation and Storage Function Control System of Kimchi Refrigerator (by Samsung Electronics in 1989).” The temperature algorithm deduced by analyzing the fermentation curve that accounts for the changes in the number of bubbles generated maintains the optimal condition of kimchi fermentation. 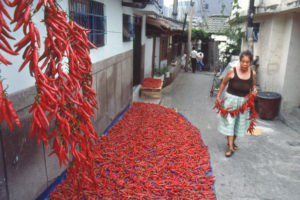 A woman dries chili peppers in an alleyway (Seoul Alleys in the 1990s).
© Kim Ki-chan (collection of Asia Culture Center)

I once met the wife of the eldest son of a head family in Naju who told me that, in times before refrigerators, she used to store kimchi without red pepper seasoning in the summer. This was because the kimchi was not preserved well in the summer due to the hot weather. Instead, she buried plain salted cabbage in a crock in the ground, and then took out the cabbage to rinse and season it each time she prepared a meal for the family. It was indeed arduous work to make kimchi every day to feed a family of about thirty.
Thanks to kimchi refrigerators, it is now more convenient than ever to make and serve kimchi all year round, allowing us to enjoy tasty and fresh kimchi on a daily basis. The time and labor spent on making kimchi is now much lower than before, in addition to how often kimchi is made. This is testament to the wisdom of Korean ancestors and the consumer demand of the times that converged to bring about technological advances.