Korea, the Land of the Tiger

Mountain lords and subjects of awe
Like the Chinese dragon, the Indian elephant, and the Egyptian lion, the animal that symbolizes Korea is the tiger. As such, tigers constitute a ubiquitous motif throughout the traditional culture of Korea, the so-called “land of tigers.” The Korean Peninsula became known as such as it largely consists of mountainous regions that were once home to many tigers. The significance of tigers in Korea is evident in the fact they were used as mascots to represent Korea at sports tournaments, such as Hodori at the 1988 Seoul Olympics and Soohorang at the 2018 PyeongChang Olympic Winter Games; the tiger mascots helped to mark these momentous occasions that brought humankind together in friendship, sport, and culture.
Creatures of well-developed and well-rounded physical proportions, tigers lurk slowly then pounce on their prey with striking swiftness. As symbols of outstanding wisdom, grandeur, and dignity, tigers were also known as lords, spirits, gods and heroes of the mountain.

Guardians of filial piety, repayment of favors, and heroic deeds
In Korean folklore, tigers are depicted as heroes and specifically guardians of national founders. One such tale features the founder of Hubaekje, Gyeon Hwon, when he was a mere baby swaddled in cloth. One day, while Gyeon Hwon’s father was toiling in the fields, his mother left him at the base of a tree in order to deliver food to his father. When she returned, she witnessed a tiger feeding her baby with its own milk. In this tale, the tiger is depicted as a sacred animal that recognized the strong character of Gyeon Hwon, who would go on to found the kingdom of Hubaekje. Tigers are also said to have eagerly helped other national founders such as Wang Geon of Goryeo and Yi Seong-gye of Joseon.
Tigers are often described as guardians and patrons of filial piety. A man named Park who lived in Hanseong was deeply devoted to his parents; after his father passed away, Park visited his father’s grave every day. One day, when he was walking over a hill to the grave site, he was confronted by a tiger. When Park shouted to the tiger that he had to visit his father’s grave, the tiger gestured for him to ride on its back. The tiger then carried Park safely all the way to the site, and then back again after the visit. The tiger repeated this journey again and again for three years after that. 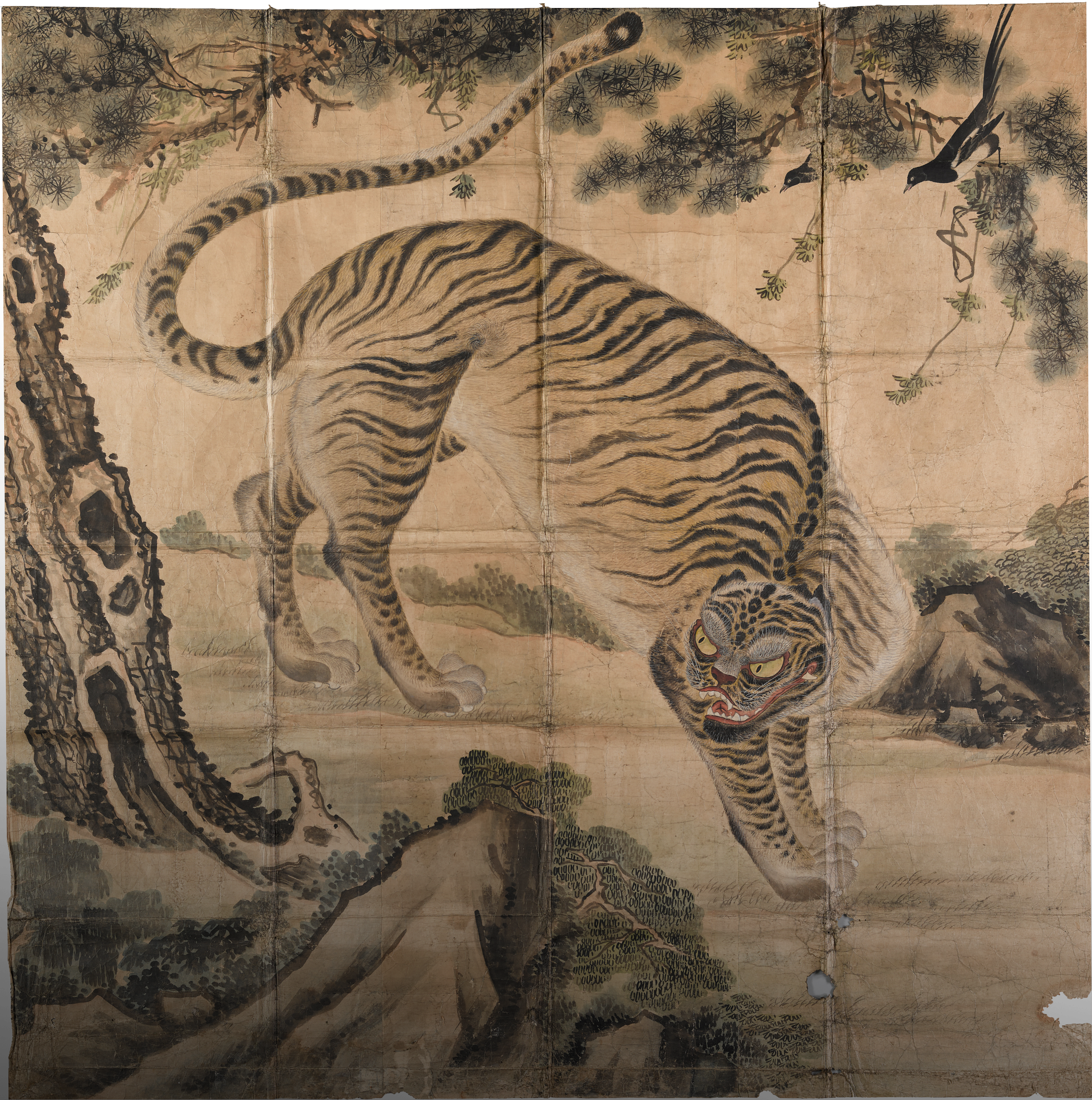 A picture of a tiger and a magpie delivering good news. © National Museum of Korea

A foolish tiger who fled in fear of a dried persimmon 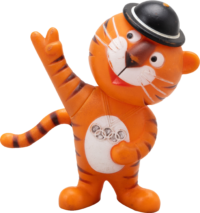 One day, a hungry tiger traveled down to a human village in search of prey, eventually coming across a house with a crying child. The mother of the child whispered, “Don’t cry, my child. There’s a tiger outside!” The tiger hesitated for a moment, wondering, “How did she know that I’m here?” The child continued to cry despite being told that the tiger was outside, which made the tiger nervous. “Does that child have no fear towards me, the king of all beasts?” Then, the mother said, “Don’t cry, my child. There’s a dried persimmon for you.” At this, the child suddenly stopped crying. The tiger then wondered, “A dried persimmon? What’s that? Does that child fear a dried persimmon more than it fears me?” The tiger did not realize that people can stop crying for reasons other than fear, nor did it know that a dried persimmon was nothing more than a delicious snack enjoyed by humans. Nonetheless, the tiger fled back into the mountains, scared of this fearsome dried persimmon that made a child stop crying at the mere mention of it.
In Korean folklore, there are interesting fables involving tigers that begin with phrases such as “A long, long time ago, when tigers used to smoke tobacco,” or “Give me a rice cake and I won’t eat you alive!” In such comic tales, tigers are strong and fast but deeply foolish creatures that are confused by more shrewd animals such as hares, foxes, and magpies. On the other hand, there are moral tales in which tigers appear as divine animals with mystic powers such as the ability to transform into humans or other animals and to foresee the future, as well as mythical creatures that uphold righteousness, help the weak, filial children, and those who do good, and ward off evil.

Riding across the land with mountain gods on their backs 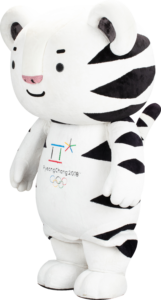 In paintings, tigers are used as motifs whose ferocity and violence are intended to ward off evil, while taking on new meaning and symbolism when combined with ot

her symbols. For example, paintings that feature tigers and hawks together are used as talismans as their ferocity wards off evil energy or mischievous spirits, while paintings of tigers and magpies express the joy and happiness of heralding a new year. Paintings of tigers and bamboo trees chase away disease-bringing spirits with loud noises such as the roar of the tiger or the sound of throwing cut-down bamboo trees into a fire. Meanwhile, in paintings depicting tigers and humans together, the tiger often represents the mountain god in itself or a messenger of the mountain god.

Tigers ward off misfortune and invite good fortune
Images made by drawing or embroidering on a tiger hide serve both decorative and evil-warding purposes. People in the past treasured such items, believing that possessing a tiger hide or a tiger-hide painting would stop mischievous spirits from intruding and allow the owner to serve as an official for a long time. In a similar manner, draping a blanket embroidered with a tiger motif on the roof of a bride’s wedding palanquin was thought to ward off mischievous spirits. As living tigers fought off such spirits with overwhelming power and ferocity, even a part of their body was thought to have the ability to combat various evil influences. As such, people crafted items such as ornaments, tassels, and designs out of the fur, bones, whiskers, teeth, and claws of tigers. In this regard, tigers were guardian deities who protected people’s health and wellbeing in everyday life.

Tigers embody the wise, proud, and witty nature of Korean people
Today, there are no tigers in the wild in Korea. However, the historical and cultural motif of tigers that formed over time continues to influence our lives in significant ways. Tigers are sometimes seen as violent beasts that bring catastrophe, but they were also worshiped as divine creatures with the power to fight off evil spirits. Depending on the tale, they were depicted as courteous animals who knew how to repay favors, or as dim-witted creatures who could be easily fooled. Our ancestors admired, hated, feared, and revered tigers, all at the same time. However, tigers in Korean folklore are never evil or malicious, instead being portrayed as dignified, divine, humorous, and humane beings. These familiar and compassionate aspects form the Korean motif of tigers, which embody the wise, proud, and witty aspects and nature of Korean people.