Role of the Tiger in Mongolian Oral Tradition

According to the Mongolian astrological calendar, as well as in other Asian countries, this year is the Year of the Tiger. As well as a year, the third of the twelve animals of lunar astrology is also marked with the day of the tiger (the day of the conquest of the tiger), the month of the tiger (the first month of spring), and the tiger hours of the day (3.40 a.m. to 5.40 a.m.). Mongols teach that, “If you do not get up with tiger [i.e., during the tiger hours], then the day will be late. If you do not study in young age, then growing up will be late.” The tiger is also one of the eight cardinal directions on the map of Mongolia, representing northeast. This corresponds with the octagonal shape of a yurt, on which homeowners place the appropriate symbols depending on the direction of each face.
There are no tigers in Mongolia; however, the animal has long been known and portrayed by the Mongols. There are an abundance of tales and mythology about tigers, and even evidence of awareness in images in rock paintings, architectural ornaments, and folk games since ancient times. Rock art is one of the most recognizable cultures of Mongolia, seen, for example, in the rock art complex in the Mongolian Altai mountains, which is a UNESCO World Heritage Site. There are only five Stone Age or Paleolithic petroglyphs in Mongolia, one of which on the Ishgen Tolgoi rock features a tiger. For this reason, it was concluded that tigers lived in Mongolia during the Paleolithic period. It is also unique in that it gives a very clear image of tigers.
Traditionally, Mongolians viewed the tiger as a symbol of confidence, power, and strength. Since ancient times, the Mongols have called the dragon, Garuda, lion, and tiger the four powers and dignities of the world. Two of the four dignities—dragon and Garuda—are celestial beings of the “sky world,” while the other two—lion and tiger—are earthly beings of the “land world.” It is said that the four powers of heaven and earth unite in four directions. In legends, tales, and old sayings, wrestlers are often compared to tigers, those with powerful limbs being described as having “tiger feet.” 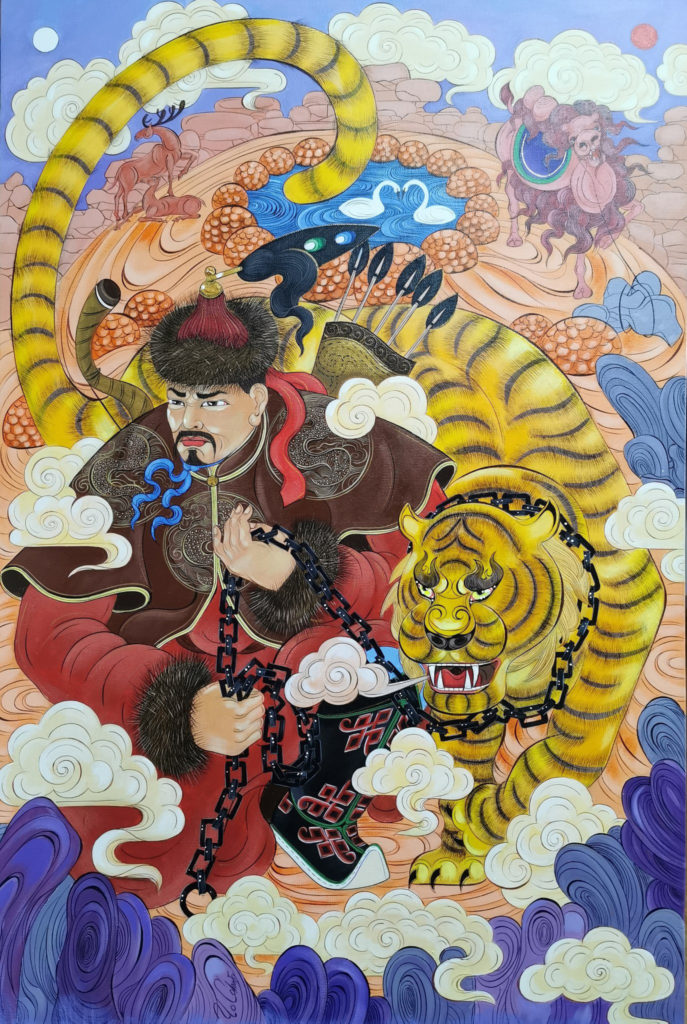 There are many proverbs and sayings associated with tigers. Some examples are: “Golden wine in the mouth is like falling into the mouth of a tiger” (from the Chronicle of the Nine Knights of Genghis Khan, which discusses the dangers of alcohol); “It is better to be the head of a fly than to be the tail of a tiger” (that is, it is better to be independent than to be carried by someone else); “To take meat from the mouth of a tiger and to take from the hands of a rich man is the same”; “It is better to tame the tiger cub before it becomes a tiger” (that is, it is better to correct problems before they become too large, and prematurely suppress danger, for example administer early cures); “Put your hand in the mouth of a mad tiger” describes the age of stupid excitement, when people are young, strong, courageous, and unafraid of danger; “Eats like a tiger, acts like a stubborn bull” describes a person who does a bad job, and is helpless and lazy; “It is better to be magpies sitting in a row than to be tigers walking in a row” illustrates the value of unity, collective strength, and friendship; “Even a tiger from the snowy mountains falls into the mouth of ants” (that is, even the strongest an fall to the bottom or lose strength in old age); “Running from the mouth of the wolf to fall into the mouth of the tiger” (that is, running away from one danger only to face a greater danger).
Many tales and myths about tigers are still told among the Mongols. The most famous is the legend of Dugar Knight Gandhi Bandida, the man who brought Buddhism to Khalkha (Kalka) Mongolia and Tibet and whose name is immortalized in the history of Asia, from Altai to Khyangan and Lake Baikal. Some doors of Lhasa temples are decorated with snow-covered blue mountain lions (the legendary lion is depicted in many paintings in the form of a tiger), while in Mongolia the image of the Dugar Knight on a white camel is still preserved in the earliest known Buddhist monastery, Erdenezuu.
The tiger appears in many Mongolian folk tales, such as “How the tiger became striped,” “Barkhaadai and Turkhaadai,” “The cat and the tiger,” and “The old man and the tiger.” In one fairy tale, the tiger was in the third year of the twelve-year calendar and was confident that no one could keep up with his speed and strength in the legendary twelve-year race. But when he crossed the river and thought he had won the race, he found the mouse had in fact won with his cunning and cleverness. The industrious cow had also already crossed, meaning the tiger actually came in third.
“Traditional knowledge of observing natural surroundings and earth,” registered in the National Register of the Intangible Cultural Heritage of Mongolia, is a concept that the Mongols have used since ancient times to conquer the highlands of Central Asia and unite the forests, steppes, and deserts of the Gobi. They developed knowledge of observing nature—sky, land, and water—as well as how to analyze human nature, character, and movement. This knowledge, which was transmitted among the populace through oral expression and tradition, was tested in practice and further developed and proven in life. The legend of Ikh Khuree, the city that evolved to become Ulaanbaatar, the capital of modern Mongolia, tells that the city was founded by knowledgeable men on a specially designated place; this place, which is said to be “as auspicious as the stomach of a hungry tiger,” is inhabited by both people and animals.
Today, ICH is understood as a set of historical elements that contain traces of the past, and is increasingly considered a historical resource that enriches human life. Its richness and value are recognized and cherished.