The Sundarbans, consisting of 10,200 km2 of mangrove forest across India and Bangladesh, is the world’s largest delta and mangrove ecosystem. Transected with rivers and creeks, the landscape is home to diverse and endangered flora and fauna, most famously the Royal Bengal Tiger. Because of its unique  cosystem, the Sundarbans enjoy the status of a Biosphere Reserve and UNESCO World Heritage Site.
The area is also home to millions of forest-dependent people. The colonial period witnessed large-scale deforestation of the mangroves and in-migration, starting from the late eighteenth century, driven by the desire for more farmlands to generate revenue, development of a port township in Canning, and other factors. There was also a substantial inflow of refugees during partition at the time of India’s independence.
People living here for generations consider the Sundarbans their sacred home and provider of their sustainable livelihood, although accessing resources from the forests—fishing, collection of honey, crabs, prawn seeds, and wood for fuel—are fraught with the risk of falling prey to tigers, crocodiles, and snakes. The forest fringe dwellers, who do not have their own land for agriculture and often live in abject poverty, are dependent on forest produce. They have developed a deep-rooted relationship of reverence with nature that is reflected in their cultural and ritualistic practices. Local folklore reveres local gods and goddesses who protect the people and help them survive with faith and hope. Historically, these legends have been shaped and nurtured through traditions of song, theater, dance, and social customs. 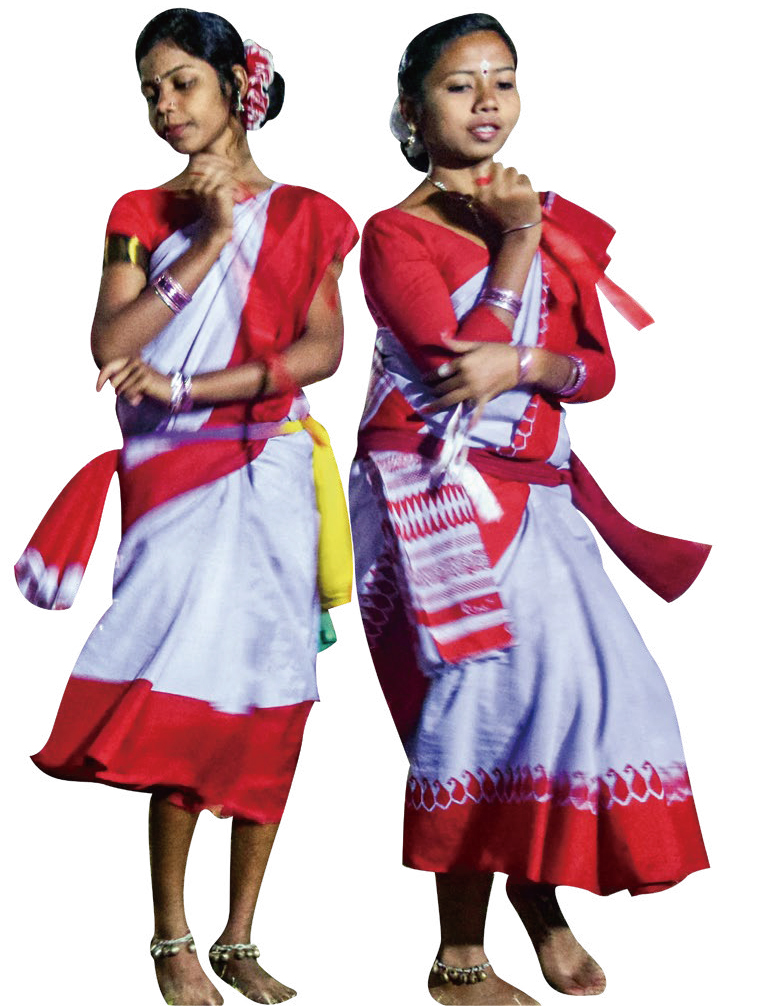 ICH elements of the Sundarbans include Jhumur (lifestyle songs and dance), Bonbibir Pala (theater), and Bhatiyali (river songs). These folk forms are integral to and manifest the local ways of life, with the Bengal tiger often appearing as an iconic character—exotic, beautiful, and dangerous. Jhumur is a lifestyle performing art of migrants who came from the Chhotanagpur plateau regions in the colonial era. They convey the local systems of belief in the power of the
forest, express the hardships of the indigenous people, and narrate their daily interactions with nature, associated with natural disasters, tides, and tiger attacks. Jhumur has also become a cultural offering in various government events and tourist resorts. It provides the possibility of a livelihood for rural womenfolk.
Bhatiyali is a folk music tradition that describes the life of boatmen and fishers who face the dangers of rough weather and tiger attacks to make ends meet. Bhatiyali songs often include names and characteristics of the rivers, streams, and islands that the boatmen pass, the high and low tides, and the risks that they face daily. The songs have lingering tunes that usually match the rhythm of rowing.
The age-old tradition of Bonbibi (Lady of the Forest) is a fascinating form of local folk drama. Bonbibi, a local deity, is the supreme protector of the forest-dependent people, the goddess they pray to for safe return after collecting honey or wood or fish. Village households contain Bonbibi idols, and innumerable small shrines can be found across the forest.
As the sole protector of the forest dwellers, both Hindus and Muslims venerate her with the same devotion and submission, establishing their sustainable relationship with nature as fundamental to their being. This tradition is thus considered a syncretic Bengali folk religion of this region.
The play narrates the story of how Bonbibi and her brother Shahjangali came to rule over Sundarbans, and how she established her supremacy over the other  native godly characters such as Dakshin Ray (Tiger God) and his mother Narayani.
The play documents the mercy and kindness of Bonbibi, and emphasizes the need to maintain a delicate ecological balance by establishing the divine rules of sustainably sharing the forest resources among all inhabitants and creatures. The villagers also believe that they will be punished by Bonbibi if they use the forest indiscriminately for profit. The performances are elaborate, colorful, and dramatic in nature, and are full of songs, many of which are from the Jhumur and Bhatiyali traditions.
In recent times, this folk theater has also become popular among tourists visiting the Sundarbans. The government also engages the artists to disseminate social messages and inform people about cyclones, floods, and ways of minimizing damage and ensuring safety during natural disasters.
The Sundarbans have been a major concern for nature conservationists for many years. The area’s fragile ecology has been under serious threat due to climate change, as well as severe exploitation of its natural resources through tiger poaching, cutting of mangroves, illegal fishing, human encroachment, increased use of motor boats polluting water and disturbing aquatic life, decrease in fresh water supply due to construction of upstream embankments, increased water salinity, and waste water pollution from nearby cities and towns. These activities are gravely impacting the physiology, lifestyle, and ecological sustainability of the region. In recent times, the Sundarbans have faced some devastating cyclones and tidal surges—Aila (2009), Fani and Bulbul (2019), Amphan (2020), and Yaas (2021)—causing severe damage, loss of life, loss of endangered fauna, and loss of cultivable land, further pushing the local people into destitution.
Out-migration from the Sundarbans is high and, as a result, the unique ICH forms of the region are under threat due to the dwindling number of practitioners. Many music-based plays on various local legends that sustained the practice of a much larger repertoire of Bhatiyali songs have died out. Safeguarding the ICH and natural heritage of the Sundarbans is inextricably linked to the inhabitants’ lifestyles, their changing environment, and the challenges therein. Since the local folk culture provides strength to people for adaptability and resilience, the living heritages need to be safeguarded and promoted as means of conserving life in the Sundarbans.