The yurt is not just a portable dwelling used by many nomadic peoples, but a pinnacle of nomadic creativity and a symbol of the national identity of the Kyrgyz people. Yurts have a plain construction, can be quickly assembled and dismantled by a few people, protect from the cold or from the heat of sun, and most importantly are entirely made of natural materials. This makes the yurt one of the best options for the promotion of eco-tourism and centuries-old traditions and crafts. No big life event in Kyrgyzstan goes without installing a yurt. Births, weddings, and funeral rituals are traditionally held in yurts. They are an integral part of all festivities, ceremonies, and important events from the local to national and international levels.
Kyzyl-Tuu village is located on the south shore of the Issyk-Kul Lake in Issyk-Kul Province, Kyrgyzstan. The village is well known for its main craft product—a traditional Kyrgyz yurt called boz ui—and was recognized by the World Crafts Council as a “World Craft City” for the yurt in 2021. Communities producing yurts live in all regions of Kyrgyzstan. However, a distinctive feature of this particular village is that more than 90 percent of the villagers are involved in the process of yurt-making. 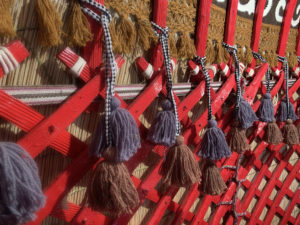