Making and Worshipping of a Haatdi

The festival of Diwali in India is celebrated by different communities in different ways, performing different rituals. It is a festival of lights celebrated by Hindus, Jains, and Sikhs, and usually lasts for five days.
The Sindhi community in India celebrates Diwali for just three days. One of the distinctive features of their celebration is the worshipping of a haatdi. Haatdi is also worshipped by a few Gujarati communities.
“Haatdi” comes from the word haat and symbolizes a shop. People worship it mainly to invoke the blessings of Lakshmi (the goddess of abundance and auspiciousness) for work or business, praying for their business to prosper. A haatdi is a colorful representation of a shop. There are some who believe it used to represent the male members of the family who were the breadwinners. The number of haatdis bought was equal to the number of male members in the family, with one being for the female child. Nowadays they are usually bought in pairs of two, four, six. After Diwali, the haatdi is immersed in water.
The making of clay haatdi begins on the day of Ganesh Chaturthi, which is regarded as auspicious and usually falls in August or September. The people of a particular community in Ahmedabad are involved in the making of haatdis, with the whole family taking part. They even travel out of Gujarat to states like Maharashtra to make and sell their wares. Haatdis are made and sold until Kaali Chaudas (the second day of the five-day festival of Diwali).
A demonstration of the process of making a haatdi was given by Mr. Chaturbhai, Mr. Varshrambhai, Mr. Bharatbhai, and their families at their place in the lane opposite APS International School in Ahmedabad. Even I enjoyed trying my hand at making a haatdi during this experience organized by India Heritage Walks and led by Mr. Keyur Shah. 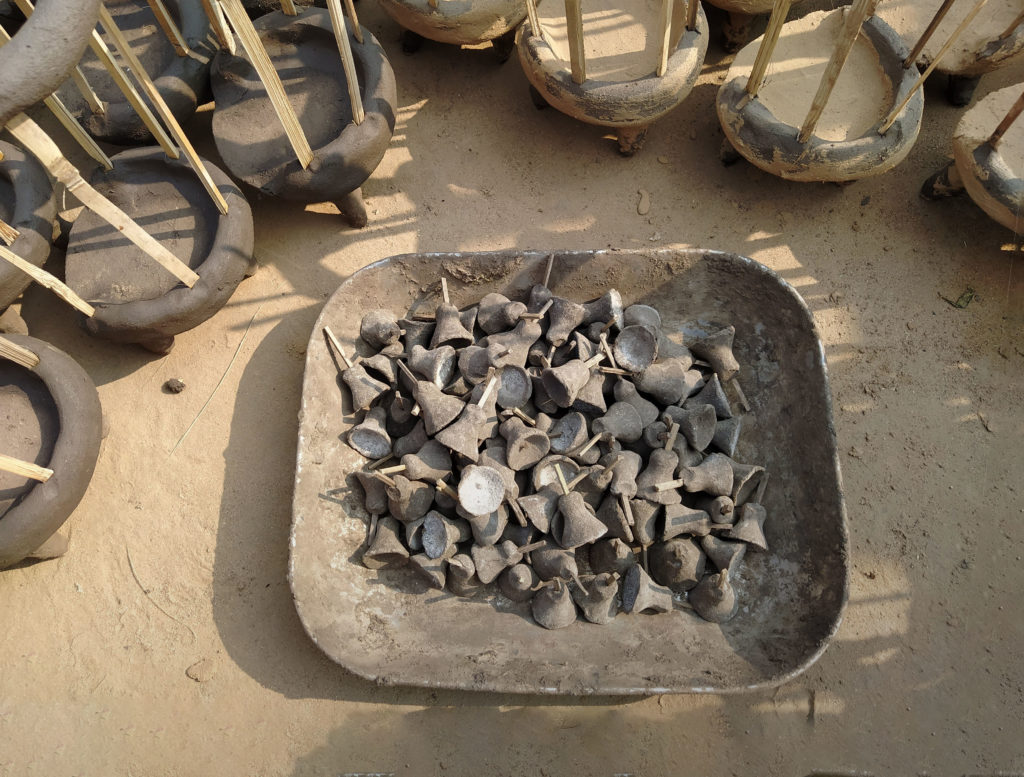 The Art of Making a Clay Haatdi
For making a haatdi, potters bring clay from a nearby pond and mix it with cow dung. Water is added until the mixture is a dough-like consistency.
A flat, round base is made by patting the wet clay by hand, before three clay feet are attached to it. Bamboo sticks are cut to the required length and inserted vertically on the base before being topped with C-shaped cylindrical clay. Tiny diyas (clay lamps) are inserted on top with the help of a stick. The structure is then left to dry in the sun. Once it is dry, it is dipped in color. Fuchsia is commonly used to color haatdis, but in some places they may be other colors like red, blue, white, and so on. After the color dries, decorative colored paper (often leftovers from other creations) is wrapped around the bamboo sticks in such a way that one side of the haatdi is left open. Small flags made of kite paper are then pasted on the top of the sticks. The colorful, beautiful clay haatdis are sold at the roadside in many places before Diwali. 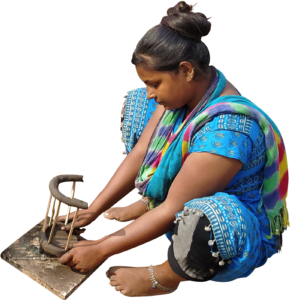 Ritual
On Diwali, pooja (worshipping) starts at a given auspicious time. Flowers, rock salt (which is believed to remove negativity), sweets (Sindhi layi or chikki), puffed rice, vermilion, and mitere (mouse melon) are offered to the haatdi. Mahalaxmi yantra are also kept in each haatdi; these have printed on them the mantras to be chanted and aarti (songs) sung in praise of deity. In a small bowl, eleven silver coins and a gold ring are immersed in milk. Sindoor (vermilion) and flower petals are added to it. This is placed near the haatdi. Flowers are offered, lamps are lit, and then the haatdi is worshipped. Everything is kept as it is for three days, after which time the mouse melon is immersed in the river or buried in the ground and the milk is also poured over the soil.
In the past, haatdis made of clay were used by all. But breaking a haatdi is regarded as inauspicious, so some people started using steel or wooden haatdis. Haatdis made of silver and gold-plated ones that can be reused are also available. In places where haatdis are not available, people make do with earthen pots on a plate to symbolize a haatdi. Many people make their own clay haatdis at home and decorate them with golden laces, mirror pieces, sequins, and more.

Safeguarding
In the past, this ritual of worshipping a haatdi was followed by everyone in the Sindhi community. But with the passage of time, it has been forgotten and many from the present generation have little idea about this custom. It is very important to revive this beautiful, charming custom to safeguard our cultural heritage.
These beautiful and colorful haatdis adorned with flowers and with the lamp lit can also be used for decorative purposes during weddings or religious ceremonies. Silver- and gold-plated haatdis make great Diwali gifts. Craftsmen make haatdis only once a year and in other months they make kites or crackers for different festivals to earn their livelihood. Let us buy and use more haatdis so that the craftsmen who make these beautiful representations of abundance continue to thrive and grow. n 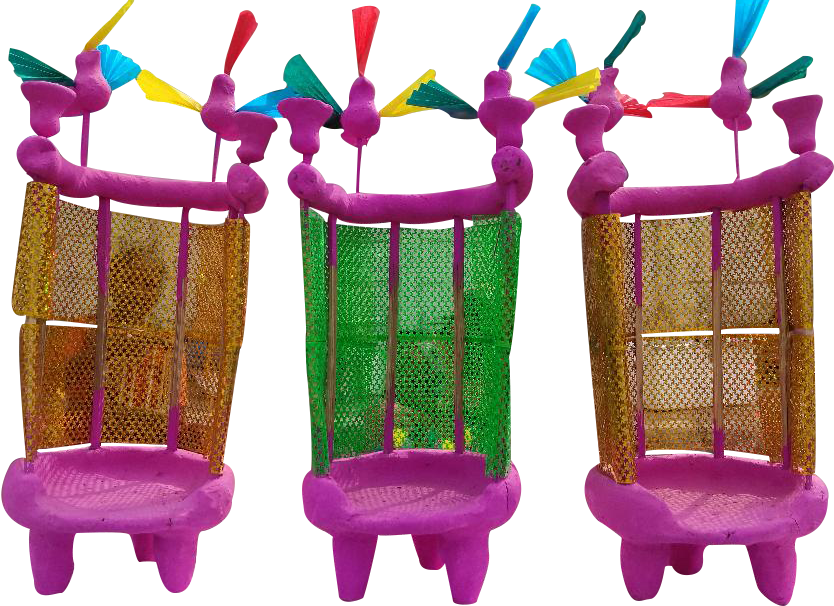