Memories and Traditions:ICH of Laos in the Twenty-First Century

The ICH of Laos is vibrant despite the instability experienced by the country’s populace throughout the twentieth century. Peace returned to the country in 1976 once the Lao People’s Democratic Republic (PDR) was established on 2 December 1975. However, a large proportion of the population relocated to other countries, including many custodians and practitioners of ICH, not only those of the Lao ethnic group but also other ethnicities such as Hmong. The relocation of these masters or knowledgeable persons led to a break in the transmission of this wisdom to younger generations.
To give one example, the former ruling elite, the royalty, and nobility, were the patrons of some practices such as traditional dance and music. Only one member of the royal orchestra of Luang Prabang is presently alive, but about a dozen young musicians have learned from this master. One of his students is now able to teach new generations of students how to play the acoustic instruments that comprise a Lao musical troupe. Performing at wakes is a continuing tradition, and tourists have become a new audience. Dances previously performed for the court, which were actually performed as offerings to deities, are only known by a handful of women today.
The upper classes also commissioned the construction and decoration of Buddhist temples. The skills and knowledge around the production of materials and techniques disappeared when this patronage stopped. Royal women held the prerogative to create goldwork or couching using metal threads and appliqué of stones and became status markers. After the establishment of the Lao PDR, members of this rank left the country, and Lao goldwork ceased. The creation and use of these markers of royal class were discouraged as well, leading to the end of the transmission of this knowledge. Other ICH elements related to the courts were discouraged by the authorities, resulting in the temporary or permanent halt of some traditions. 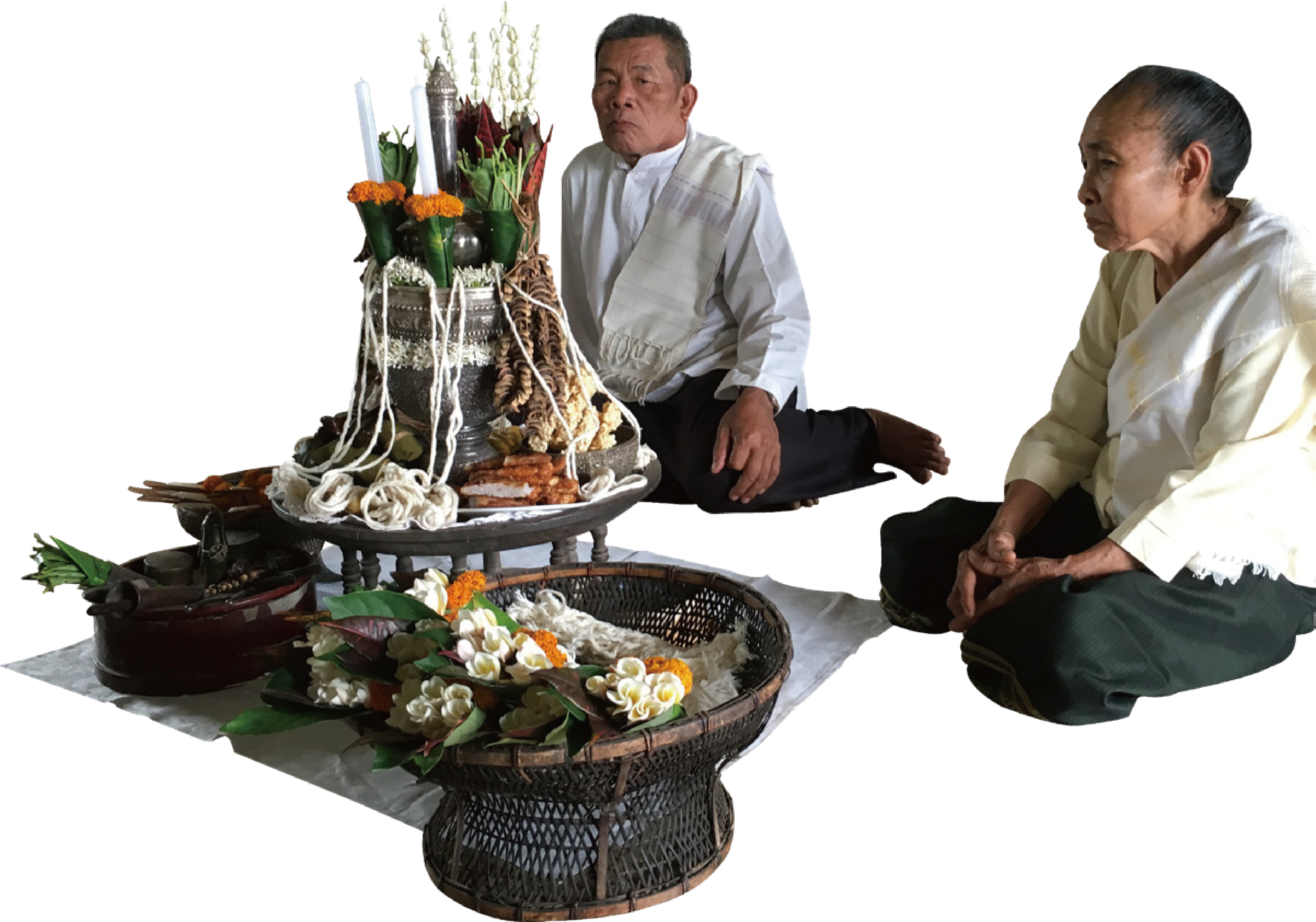 A baci ceremony is an important ritual held to appease deities and ancestor spirits when asking for good health, safe journey, rites of passage such as marriage, and welcoming guests. Luang Prabang, Laos © Linda S. McIntosh

Over time the restrictions mentioned above were lifted, allowing for the revival of various ICH elements. Memory served as a reservoir of knowledge for ICH traditions whose practice and transmission had ceased temporarily. The masters of some elements are no longer present in Laos to transmit the wisdom of techniques, symbolism, and use. Memory is thus crucial since this knowledge is not recorded in books, but rather is passed on via oral instruction.
Modernization and urbanization have also altered the active practice of other heritage elements. For example, the urbanization of the town of Luang Prabang has reduced its green space, especially the home gardens that provided food, medicine, and materials for offerings. Presently, most people buy offerings composed of marigold flowers and banana tree parts rather than create their own. Seasonal flowers, whose names have auspicious meanings, are no longer part of these offerings due to their absence in the landscape and the lack of transmission of this ICH.
Community-led groups are forging the path to safeguard various Lao ICH elements. One of these is the Norphao Group, based in Luang Prabang. Besides teaching new generations of musicians, members are transmitting traditional wisdom concerning ephemeral offerings including paper lanterns, fire boats, and floral arrangements, and wisdom regarding goldwork embroidery, ipok puppetry, and the stenciling that decorates the Buddhist temples of Luang Prabang. The dances that were once performed for the court and its guests are being taught once more. Dancers must perform rituals to thank the masters, both alive and deceased, for imparting the skill and knowledge needed to dance, including the dancers producing their own attire. It is considered disrespectful to the masters if a dancer does not create her own garments for performing. New dancers are also taught that some dances are solely for the gods and should thus be performed with their backs to the human audience.
Elder residents of Luang Prabang remember these various ICH elements even if they were not masters nor practitioners themselves. Their memories can facilitate the return of the practice of some traditions as the elders can recount them to other members of the community, which is extremely useful in safeguarding ICH. However, it is also crucial to record the knowledge that is the foundation and the raison d’être of these traditions. A few residents possess this knowledge, but many do not.
Some aspects of ICH in Laos are at risk, while others are extinct. Thus, it is crucial to safeguard extant ICH elements, their foundations and raison d’être, beyond oral transmission. Written documentation can be disseminated to communities, schools, libraries, and universities. Interviews with stakeholders can be preserved in audio and audiovisual recordings.
The ICH of Laos is vibrant. The telling of time via the beating of temple drums and ringing of bells continues even though everyone owns a clock, watch, or cell phone that tells accurate time. However, these modern measures of time do not convey when it is time to prepare for daily almsgiving or when a festival will occur. Modernization and life in the twenty-first century bring changes to individuals and communities, but Laotians have managed to maintain many ICH traditions.
Organizations can cooperate with communities to safeguard the country’s ICH by sponsoring the documentation and dissemination of knowledge to the wider populace.