Memory and ICH in Kyrgyzstan

Kyrgyzstan, a landlocked country the territory of which is more than 94 percent mountainous, is among the most attractive lands located at the heart of Asia on the ancient Silk Road trade routes. There are more than eighty ethnic groups living in the Kyrgyz Republic, although the majority of the population are ethnic Kyrgyz. The cultural heritage of the Kyrgyz people has been greatly influenced by their nomadic history. Kyrgyz people occupy a unique cultural environment and have a rich ICH. The vitality of this cultural heritage is safeguarded and transmitted from generation to generation informally through practice or expression and oral transmission; written and recorded forms only began to be developed in the twentieth century.
The modern state in its current form possesses an ancient history, culture, traditions, and customs that are reflected by practice and expression. The traits of the nomadic ancestors are still evident in the contemporary Kyrgyz family and are enacted in an everyday spiritual attitude. As noted by one ethnographic study, “Kyrgyz people aspire to conserve the sacred structure of their world, to retain its global order, passing these values from generation to generation through ritual practices, and encouraging in their children the special attitude to their native land which they have inherited from their ancestors, the ancient nomads.” Nomadic traditions and customs are still prevalent today, taking the form of social practices, rituals and festive events, traditional craftsmanship, and so on. Therefore, cultural memories and ICH are very important parts of the life of Kyrgyz people, evidenced by the household practices, customs, and rites. The viability of the cultural heritage is ensured by the continuous transmission of knowledge and skills that are essential for their enactment or embodiment.
As elsewhere in the world, the cultural heritage of the Kyrgyz people has traditionally been transmitted orally rather than in written form, meaning memories transmitted in intangible forms bear significant value. The best-known example of the Kyrgyz culture is the Epic of Manas, an incredibly long poem that has been transmitted orally through generations, while the lines only began to be committed to paper in the twentieth century. The Epic of Manas is one of the longest epic poems in the world and was transmitted orally by manaschi, the bearer of the element. The Epic of Manas describes the traditions, customs, rituals, ceremonies, holidays, and daily life of the Kyrgyz people, thus representing the heart of the culture, and is widespread among the Kyrgyz people. Its traditional oral form meant people were aware of the cultural heritage in general, even though it was not written. 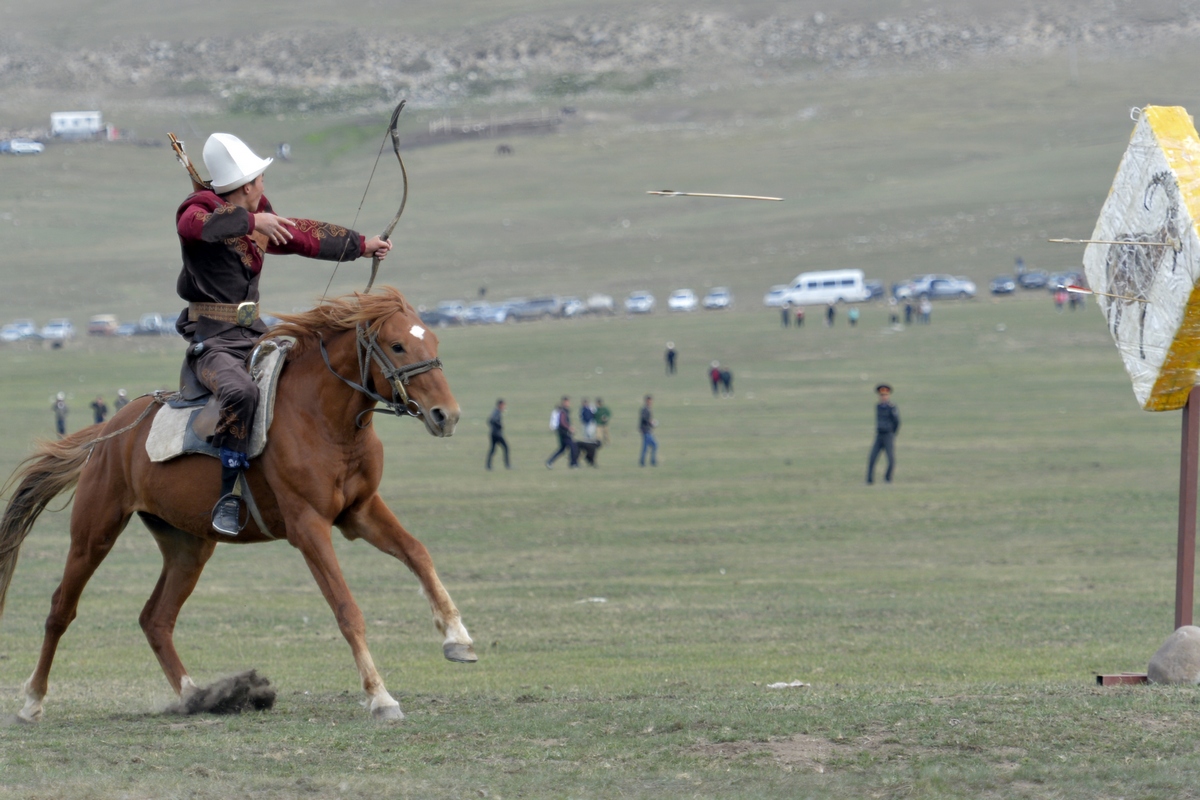 The values and practice of cultural heritage are influenced and developed by different communities and overall are considered as a collective memory. Therefore, Kyrgyz people bear a lot of shared heritage representing a variety of cultures, which fosters social cohesion. For instance, Kyrgyzstan is included in a number of multinational items inscribed on the UNESCO Representative List of the Intangible Cultural Heritage of Humanity, such as the traditional intelligence and strategy game Togyzqumalaq, Toguz Korgool, or Mangala/Göçürme (inscribed by Kazakhstan, Kyrgyzstan, and Turkey), the flatbread making and sharing culture known as lavash, katyrma, jupka, or yufka (inscribed by Azerbaijan, the Islamic Republic of Iran, Kazakhstan, Kyrgyzstan, and Turkey), and the new year celebration Nooruz (inscribed by twelve countries including Kyrgyzstan). This reflects that Kyrgyz people bear a rich history, culture, and traditions rooted in their nomadic culture, with evolving manifestations and transmission from generation to generation. The memory plays a significant role although the cultural heritage is composed of diverse and plural memories. The cultural heritage gives people a sense of identity and continuity from the past to the present, and the future can evolve in accordance with the environment. Everything in Kyrgyz culture bears a trace of ancient generations that represents the material and the spiritual world. However, intangible heritage remains the most fragile form of heritage and is subject to measures for safeguarding and development. In the face of globalization and modernization, living heritage is at risk of becoming devalued.
In line with modernization and technological development, cultural memories began to be recorded and digitized in Kyrgyzstan. Digital documentation enables the continued safeguarding and transmission of the cultural memories of communities. There are a number of governmental and nongovernmental organizations (NGOs) in the Kyrgyz Republic who are working to develop the digital documentation of cultural memories. Among them are the National Academy of Science of the Kyrgyz Republic and KTRK (the national public broadcasting corporation). In one example, the NGO Aigine Cultural Research Center (CRC), accredited under the UNESCO 2003 Convention, has pioneered digitization of the entire Manas, Semetey, Seitek epic trilogy recited by the contemporary epic chanters. Meanwhile, Rural Development Fund, another NGO, developed a series of digital documentation of Kyrgyz traditional knowledge as well as knowledge and
practices concerning nature and the universe.
Recognizing the fact that more and more readers use the internet to access information, libraries in Kyrgyzstan such as the National Library of the Kyrgyz Republic have developed a catalog of national bibliography in digital format. For instance, within the framework of the ‘Network of Heritage’ project, the National Library has committed to CD-ROM various episodes of early editions of the Epic of Manas as well as historical and cultural heritage books. Digitization is an efficient way to ensure the safeguarding and transmission of cultural memory as well as raise awareness among younger generations about the cultural heritage that bears the core of Kyrgyz traditional wisdom.
The cultural heritage of the Kyrgyz people has been safeguarded and transmitted over generations as collective memory, orally or through practice and expression. However, contemporary lifestyles require contemporary approaches to reaching the general public, especially young people. To this end, the development of digital documentation is an innovative way to meet today’s needs for the Kyrgyz Republic as well. The older generations possess valuable cultural memories that are subject to digitization to ensure the safeguarding of ICH and to transmit it to their younger counterparts.