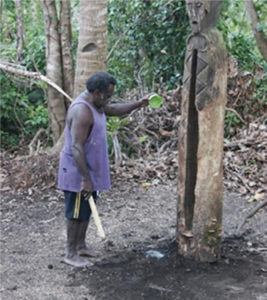 The distinction between natural hazards (such as earthquakes or droughts) and disasters (which are the impact of these hazards on human populations and infrastructure) has been clearly defined since at least the 1970s. No disaster is entirely natural. Instead, hazards exploit existing vulnerabilities, including the ways in which people are exposed to their impacts, and the capacity of communities and states to respond to hazard events and to prepare for future disasters. Disasters related to natural hazards, or to anthropogenic hazards such as nuclear pollution, are classed as emergencies, along with epidemic disease and armed conflict. In the context of cultural heritage, all these emergencies share a dual aspect – the impact of the emergency on culture and heritage, and the capacity of culture and heritage to respond to and limit the impacts of the emergency. Since 2016, UNESCO’s Intergovernmental Committee for the Safeguarding of the Intangible Cultural Heritage has advocated at each of its annual meetings for closer attention to the relationship between ICH and emergencies.
The Committee has called for a series of initiatives, including a desktop study on “Safeguarding and Mobilising Intangible Cultural Heritage in the Context of Natural and Human-induced Hazards,”1 and an Expert Meeting on Intangible Cultural Heritage in Emergencies in May 2019,2 which drafted the “Operational Principles and Modalities for Safeguarding Intangible Cultural Heritage in Emergencies,”3 subsequently adopted by the General Assembly in 2020. Two training modules—Basics in Disaster Risk Reduction and Intangible Cultural Heritage (U063), and Integrating Disaster Risk Reduction into ICH Inventorying (U064)—have been developed and trialed at workshops in the Philippines and Honduras during 2021.
ICH plays an important if often under-acknowledged role in every stage of the disaster management cycle—in preparing for, responding to, and then recovering from disasters. At a local level, knowledge and practices that are critical to the management or reduction of disaster risk are commonly held widely across a community, rather than being concentrated in a few specialist roles or institutions. Local understandings of landscape, ecology, and weather are drawn upon to limit risk—in situating settlements to avoid cyclone damage, for example; specific practices are embedded in daily routines and transmitted across generations;
and knowledge gained through historical experience of disaster is passed on, through oral tradition and encoded warnings. Where these ICH traditions are maintained, their influence on disaster risk reduction can be profound, as in the cases of Indonesia’s Simeulue Islanders and their tradition of smong, which massively reduced mortality during the 2004 Indian Ocean tsunami, or similar knowledge held by Simbo Islanders in the 2007 Solomon Islands tsunami. In both cases, mortality among immigrant communities without these forms of local knowledge was tragically higher. ICH also plays a crucial role in recovery from disaster, through life-affirming ceremonies that help to bring communities together again with a common purpose, as witnessed in the revival of traditional rituals and ceremonies in the aftermath of the Great East Japan Earthquake of 2011. Craftwork can provide a relatively swift means of generating income in
the aftermath of disaster, where access to the necessary materials is available. Although there is increasing awareness of the role of ICH in managing disaster, the ways in which disasters impact on ICH is poorly understood and less well documented. The focus on impacts to tangible heritage in post-disaster needs assessments and other mechanisms for investigation has left us with a very limited knowledge base for the precise links between disasters and ICH impact or loss. In part, this reflects the lack of adequate prior inventorying of ICH elements and practitioners, and the under-representation of these factors in disaster planning. But it also reflects the absence of a general model for the ways in which ICH is transmitted over time, and how it becomes exposed or vulnerable to disaster. How can we safeguard ICH if we do not appreciate it as fundamentally dynamic, and understand how it is transmitted?
When Category 5 Cyclone Pam struck the World Heritage cultural landscape of Chief Roi Mata’s Domain in Vanuatu, the traditional sites—carefully located to restrict cyclone damage—were largely untouched, while much of the modern tourism infrastructure was destroyed (Figure 1). But more important than the limited physical damage to the tangible heritage was the recognition among the site’s custodians in the community that the cyclone also represented an opportunity to reflect on the state of traditional disaster mitigation strategies, and their transmission as ICH (Figure 2). In the process of managing their World Heritage site since 2008, the custodians have developed a model of heritage sustainability that integrates tangible and intangible forms of heritage, together with community livelihood, a model referred to as “People, Place, and Story” (Figure 3). The material world of environments, landscapes, artifacts (“Place”) is made meaningful through the intangible narratives and knowledge about it (“Story”), and this knowledge is developed and communicated among communities and individuals (“People”). Conscious safeguarding of all three of these modalities of heritage, and of their articulation through performance, expression, or production is vital to successful transmission, and something like this model from Vanuatu will be an essential platform for the way we approach ICH and disasters in the looming climate change crisis.