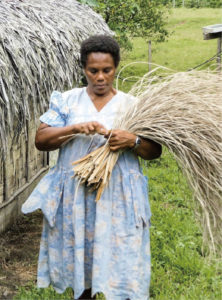 Ambae Island, Vanuatu: Home to more than 11,000 people, the people indigenous to the land.

In April 2017, Ambae’s Manaro volcano, Mount Lombenben, rumbled continuously, spewing torrents of volcanic matter and gas from its crater, covering the majority of the island in thick layers of ash, hampering water sources, and destroying vegetable plots and gardens. The government of Vanuatu ordered a mandatory evacuation of the island and the people of Ambae were forced to relocate to neighboring islands—Pentecost, Maewo, and Espiritu Santo—leaving their homes, animals, and crops behind. The impact was devastating. Schooling was disturbed, livelihoods perished, and many people struggled with trauma and the challenges of integrating into new communities where they didn’t have strong connections or access to land and natural resources.
Six months into the massive displacement exercise, Further Arts partnered with the Vanuatu Cultural Centre and UNESCO to conduct a post-disaster assessment of Ambae’s ICH. Working closely with the Ambae Council of Chiefs, representatives of which were largely displaced to Santo, we received their endorsement to support the documentation of community stories to safeguard cultural knowledge and practices.

At this time, we found that women overwhelmingly spoke about the loss of cultural heritage and practice, and in particular their weaving skills, in light of their living conditions in relocation camps. Their cultural heritage was at risk. In partnership with the Vanuatu Cultural Centre, and with funding from the Peace and Conflict Studies Institute of Australia (PaCSIA), Further Arts was able to return to displaced Ambae communities in the following year to speak with community members and explore possibilities for how they could continue their weaving practices and transfer skills to younger generations.

When we got to Santo, we didn’t have any pandanus leaves to weave with. We were so unhappy. We worried that we would lose our customs and forget how to weave. It was so hard for us.           – Esther Tari, weaver from South Ambae

Since 2018, Further Arts has implemented the Pandanus Bank blong Mi program to support resilience building, peacebuilding, and safeguarding of the ICH of displaced Ambaean weavers and artists. Rita Bill, Further Arts fieldworker in Santo, facilitated connections between the displaced communities and other communities in Santo to supply pandanus leaves to Ambaean women to continue their weaving activities in their temporary residence. More than twenty communities in Sanma Province donated rolls of dried leaves ready for weaving. We are indebted to the support toward this effort of key partners in Sanma, including the Sanma Council of Chiefs. Communities on nearby Malekula and Pentecost islands also contributed rolls of pandanus leaves.

With access to leaves, displaced Ambaean women were engaged and empowered to become more self-reliant, and their communal weaving activities became a force to build peace and bridge the divide between displaced and host communities. It has also been successful in diverting them from possible negative behaviors and patterns in the post-disaster idleness, such as crime, conflict, or gambling. 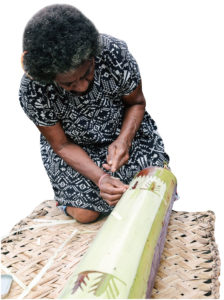 Cutting a mat design into a banana tree trunk, which is used in the dyeing process to make the imprint on the woven pandanus leaf mat. © Gina Kaitiplel, Further Arts

Importance of Pandanus Mat Weaving in the Community
Pandanus in Vanuatu is one of the most highly valued natural resources. Weaving in Vanuatu is sustained through customary beliefs and value systems that dictate how one should handle pandanus leaves, when and where one should weave, and so on. Weaving is likewise a strong part of the Ambaean identity; it is essential to their traditional way of life in the post-disaster contemporary context, and is an important resource to support sustainable rural livelihoods.

It is believed that pandanus leaf weaving originated with a man from Ambae called Boevudolue. The legend tells that Boevudolue was preparing to undergo a ritual ceremony to upgrade his rank. The custom required Boevudolue to perform a pig killing ceremony that required mats. In order for Boevudolue to reach the chiefly rank, he had to dress in a special mat called Tomangaga and also lay another mat, Tavuke, for the pig killing ceremony.
In 2019, after many Ambaean people had returned to their home island given the reduced volcanic activity, Rita and Further Arts General Manager Viviane Obed worked with local communities to support them to host a workshop for women weavers and artists in the communities of North and South Ambae. The workshop focused on elements that bind a society, promoting peacebuilding and empowering people otherwise disempowered by displacement and assumed deficit. During the seven-day workshop, discussions included strengthening the value supply chain for pandanus and other local materials used by women to create local products, whilst also exploring ways to establish safe local maker spaces for production, exhibition, learning, and market opportunities.
Mats are used in all aspects of the lives of the people of Ambae. In South Ambae alone, we recorded over nine different types of mat, such as those used for traditional dressing, marriage, burials, blankets, trade, and other everyday purposes. Each tribe of Ambae have their unique mats and designs, of which they retain the knowledge regarding preparation, measurement, use, and value. There are also traditional songs for specific mats that are sung by the tribes,
and different materials are used to create designs and motifs, and to dye the mats.
The unique patterns and designs of the mats are not given away freely by master weavers. Young weavers must earn the right to listen to stories of weaving and sing the traditional songs before actually learning how to weave a particular pattern.
Efforts by local chiefs and communities are in progress to safeguard these customs, and ensure protection when passing knowledge to younger generations. 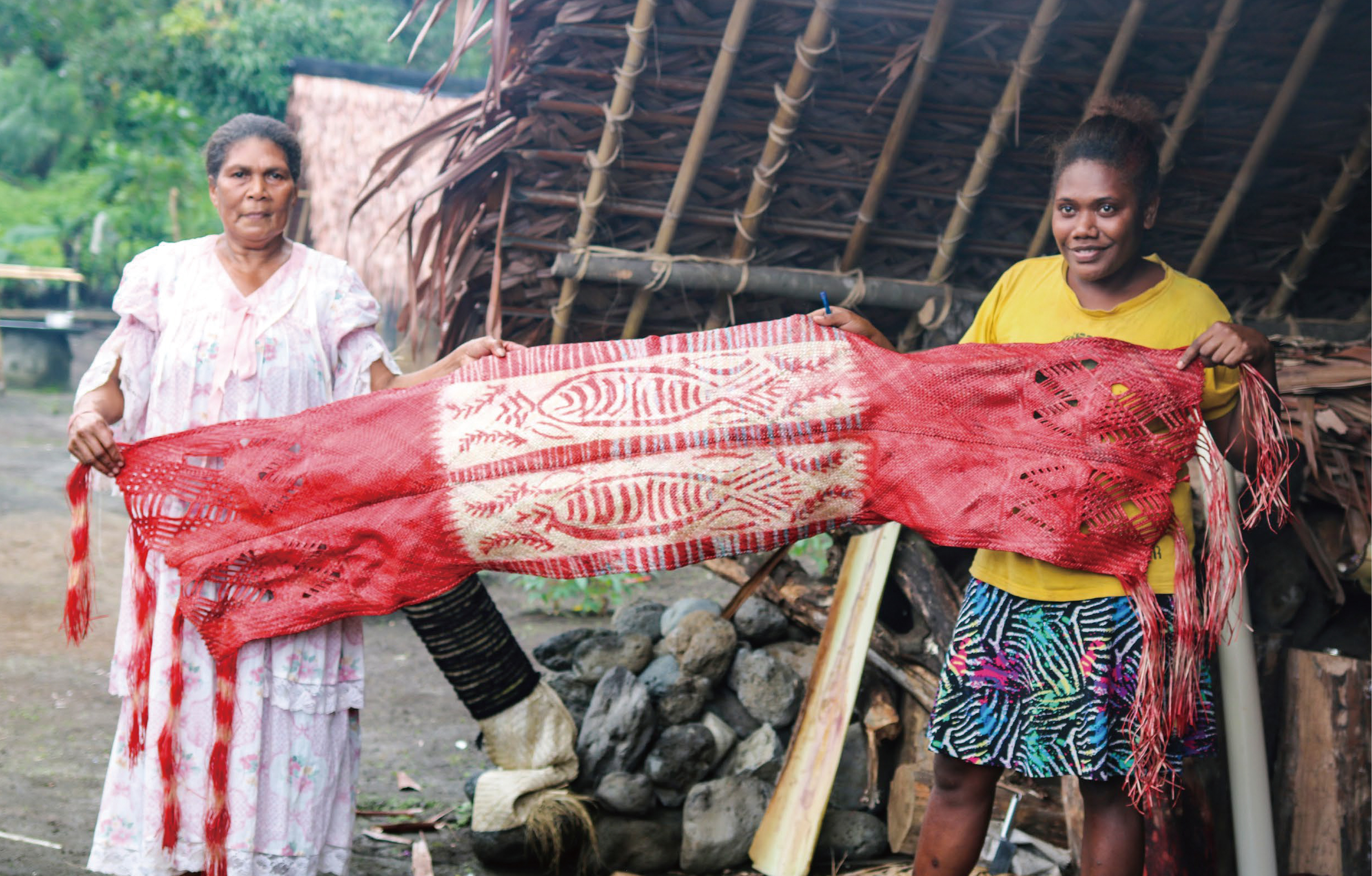 A dyed mat—the result of the design and dyeing process. This mat belongs to this young girl, Trisha from South Ambae. She wove this mat during the workshop and had the opportunity to dye it. © Gina Kaitiplel, Further Arts

Outcomes and Next Steps
This is a significant milestone for both host island and Ambaean communities. Women building bridges through pandanus leaves preserves our traditional mats that were used in the ancient times for exchange and trade between islands.

Through this work with Ambaean communities in Ambae and Santo, Further Arts has been honored to learn from weavers and artists, and to raise their voices and stories in national forums, providing input into policy development processes and disaster-recovery programming. This has included our participation in the Shelter Cluster and Gender and Protection Cluster, which have subsequently informed the National Policy for Climate Change and Displacement and National Recovery Strategy. Further Arts also strongly advocates increased support and attention to arts and cultural displacement, as we recognize that improved wellbeing is possible for people displaced by disaster through enabling cultural bearers to recreate and/or re-interpret their situation.
Art can galvanize strength-based approaches and narratives that safeguard and boost cultural practices.
As part of the Pandanus Bank blong Mi program, Further Arts has developed a four-part video series featuring the stories of Ambaean communities, and women weavers in particular. These will be distributed in 2021 via online media and shared back to the communities involved for use and archiving.
For more information on the program and other Further Arts productions, visit the Further Arts website (www.furtherarts.org) or Facebook page (www.facebook.com/FurtherArts).
A video documentary “Home Away From Home” was produced by Further Arts to amplify the voices of displaced people following the volcanic eruption and mandatory evacuation of Ambae in 2017. It can be viewed at https://youtu.be/kANt4xMXwn8.
Further Arts would like to acknowledge the Peace and Conflict Studies Institute of Australia for its ongoing support to this community work.