People Who Love Their Land: Methods of Protecting the Environment of Konduk Village

Konduk is a remote mountain village in Kyrgyzstan, located in the Alai-Kuu valley, not far from Kulun-Ata Nature Reserve in Osh Province. The reserve has a high level of biodiversity, being home to rare species of plants and animals. The population of the village is about 1,500. Several male villagers work in the reserve, and are well aware of the natural diversity of the reserve; they have generational practices, oral stories, and traditions to preserve the land they live. In 2020–21, an Aigine Cultural Research Center team investigated the traditional ecological knowledge of this community.

Protection and Support of Sacred Sites
On the territory of the reserve there are mountain lakes of unique beauty, ranging in size from small (Kichi), to medium (Orto), to large (Chon). Locals revere and protect these lakes as sacred spaces, transmitting a wealth of legends and oral stories about their names and origins.
Sites considered sacred are places of special spiritual, religious, cultural, or historical significance for the local population. There are more than 1,100 sacred sites in Kyrgyzstan. Such places are also a hotbed of natural diversity. The rules of conduct at sacred sites, which contribute to the conservation of nature and prohibit harm to living beings, can be considered a traditional way of the Kyrgyz people to protect nature. In addition to the lakes in the Alai-Kuu valley and village area, there are several sacred sites—trees and springs—which have their own history of appearance and safeguarding by the community, as well as healing properties.

Bata Ritual
Beside the village there is a large river, the Kulun, which flows into the lakes. Locals often fished there, with fishing a recreational activity for children and adults. However, three years ago residents began to notice a sharp decline in the fish population in the river. In order to protect the river and its fish, the locals gathered for a bata ritual (blessing) aimed at banning fishing in the Kulun for five years. As a result of this traditional ban on fishing, the fish population has recovered markedly.

Traditional Taboos and Oral Transmission of the Rules of Respect for Nature
The Kulun-Ata Nature Reserve has a high level of animal diversity. Bears, snow leopards, deer, mountain goats, and other species live on the territory of the reserve. Among the local residents of Konduk, there are many hunters who pass on their skills and knowledge from generation to generation.
Since ancient times, in Kyrgyz tradition, hunting has been considered one of the fundamentals of human existence. In some crisis periods, people escaped and relied on hunters for food. Hunting is thus a big responsibility.
One of the most important requirements for hunting is a careful attitude toward wild animals. Among the Konduk locals, oral stories and legends are widespread about the consequences of a wasteful, careless, and greedy attitude to nature, which affected the fate of the people.
One of the village elders Maatov Bokonbai tells the following story:

Once in Konduk there lived a rich man. His name was Zhansary. He had a son, Nasipkul.
Despite his family’s wealth, Nasipkul had a habit of taking some of his fellow villagers’ cattle to a remote cave and slaughtering them there. His relative Kalmyrza became angry with him for this behavior, and on one occasion followed him to the cave.
Seeing Kalmyrza, Nasipkul began to run away, but Kalmyrza caught up with him, tied a stone around his neck, and threw him into the rice fields. Nasipkul’s body was never found. Later, Kalmyrza shot a deer, chased after it, was wounded himself, and flew off a cliff into a pond. Now this place is called Kalmyrza.

The elders hold that the events of this story are a demonstration of the results of the misuse of nature. 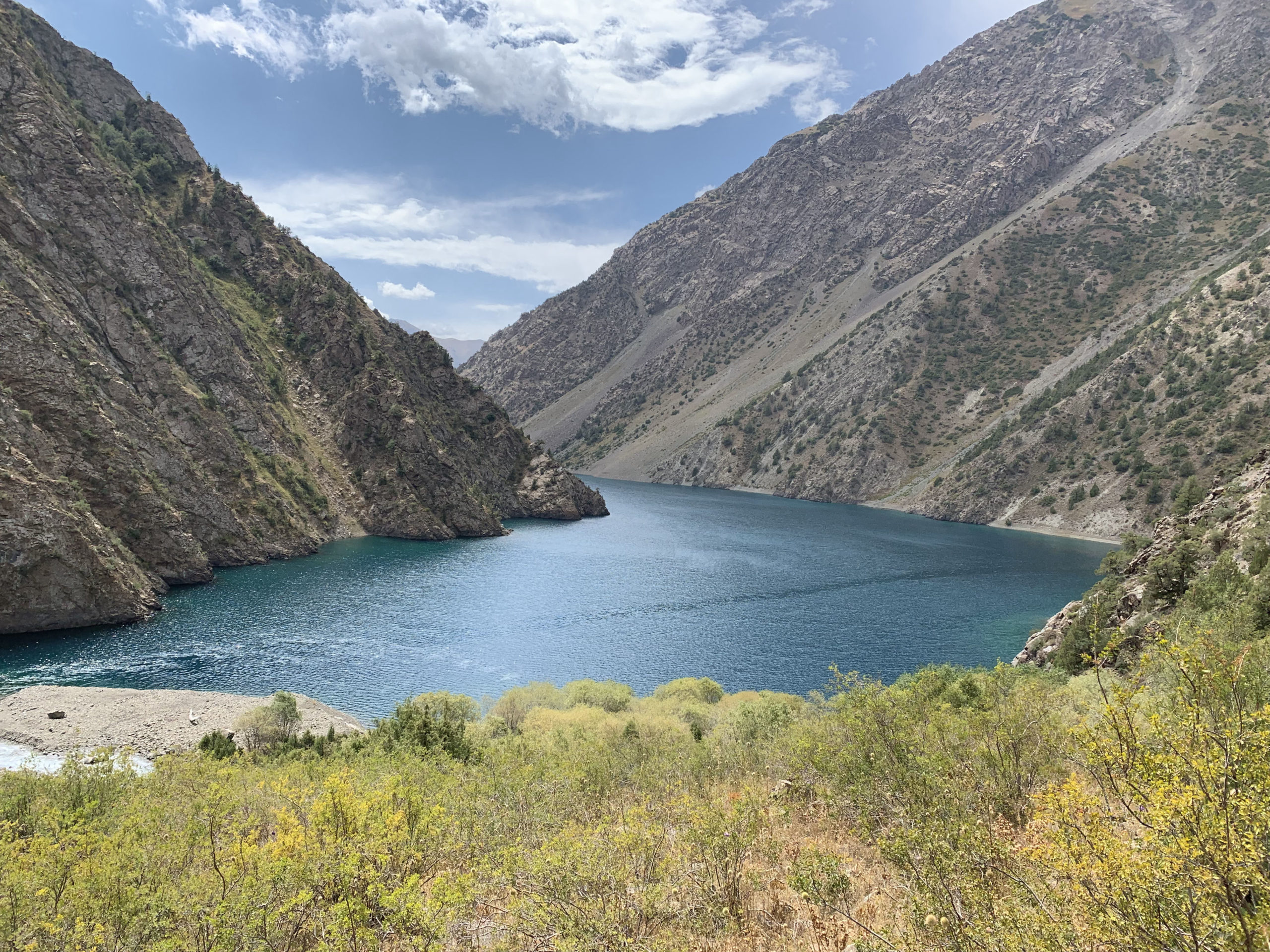 The medium-sized (Orto) lake in the reserve © Aigine CRC

The History of Kojojash as a Lesson
Among the local former hunters who now work as rangers in the reserve, the experience of ayans (visions) from the spirits of Kojojash or Kayberen is also common.
Among the Kyrgyz people, there is a belief in the existence of the guardian spirits of wild animals. One of these is Kayberen, the spirit of a female mountain goat. Receiving this type of vision is a sign to hunters that it is time to stop hunting animals, including wild mountain goats. Kojojash is the protagonist of the Kyrgyz small epic of the same name: 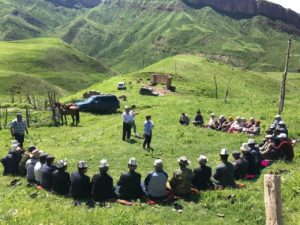 Kojojash was a skilled and successful hunter; he managed to save his relatives from starvation during a long winter and the loss of livestock. Many relatives believed in the luck of Kojojash so much that they practically stopped eating the meat of domestic animals, counting on prey from hunting.
Kojojash has a dream where, after a successful hunt for wild goats, he finds himself on top of an impregnable rock. He is afraid and asks his wife to interpret the dream. She advises him not to go hunting again, as his life is in danger. However, the elders interpret the dream differently, and Kojojash decides to continue hunting for the offspring of Sur Echki (a gray female goat). Sur Echki in the epic is an image of natural fertility, the mother of a thousand wild goats. The confrontation between the hunter and the sacred animal intensifies after Kojojash completely exterminates the young offspring of Sur Echki.
During one of the meetings, Sur Echki asks Kojojash to keep her last goat Alabash alive. However, the hunter gets excited and kills him too, thereby undermining the possibility of Sur Echki’s continuing her family. Sur Echki vows to take revenge on Kojojash for the destruction of her offspring, and the hunter swears that he will not calm down until he catches his rival. In the end, Sur Echki manages to lure the hunter to the slope of an impregnable rock and leaves him there to die of hunger and cold. Unable to bear the suffering, Kojojash rushes down from the rock and dies.

These oral stories have been transformed by the locals into firm rules to limit the hunting and killing of wild animals living in the reserve and villages close to it. 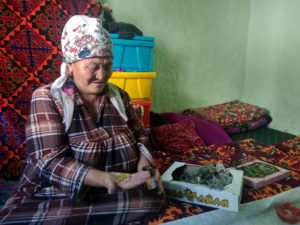 Traditional Handicrafts and Medicine
Many residents of the Alai-Kuu valley note that since childhood they have been using various types of herbs that grow on the slopes and pastures of the region. Knowledge about these plants is instilled in people from childhood. In May, with the onset of spring, local children traditionally gather in groups and head to the nearest mountains, where yshkyn (wild sorrel), wild garlic, koburgön (mountain onion), zhörgömuch (wild mountain cereal plant), and many other delicious wild herbs grow. Women in Konduk are well acquainted with this flora. This knowledge helps them to lead their lives without harming the environment with chemicals.
According to one resident of Jumakan apa village, in their family they almost never use medicines, but rather are treated with herbs, each herb having its own purpose: “Headaches are treated with mint, and stomach diseases with red leaves. I collect red leaves from the mountains, dry them and make tea for my children.”
Due to such an abundance of herbs growing in the Alai-Kuu valley, locals also use them in the creation of various wool and felt products. The felt is made from sheep’s wool and is dyed using a natural method exclusively with herbs. At the end of their useful life, these products do not harm the environment. Kiyizbayeva Arzaiym describes the use of herbs:

I learned handicrafts from my mother. I know how to make felt, embroidery, suitcases, and bedspreads. We use mountain herbs in the manufacture of all this. I collect herbs called Uuljan in the mountains and add them to my products. You can also store felt products with herbs such as ermen (tarragon) and karkor (sagebrush). I keep using all these techniques from my mother, because she showed and taught me all this. She dyed felt and wool only with herbs, for example mint or herbs called Burmа kara (black corydalis). Dyes with these plants do not fade in the sun, unlike modern chemical dyes that quickly lose color and turn gray. That’s why grass has so many properties.

The villagers work in the reserve and use modern methods of nature conservation, at the same time not forgetting the local knowledge that has been working effectively for many decades. Such models and approaches of nature conservation don’t require much in the way of resources and at the same time produce visible results in both the short and long term. Examples of traditional handicrafts that use local natural raw materials and dyes, and traditional medicine, demonstrate a community model that is friendly to nature. Knowledge about the sacred animals, sites, and plants of the Alai-Kuu valley contributes to the spiritual education of communities, while spreading the taboo on the mass shooting of animals contributes to the ethical education of new generations of hunters in this and other villages. n