Pulaka A Staple Food of the People of Tuvalu Rt. Hon 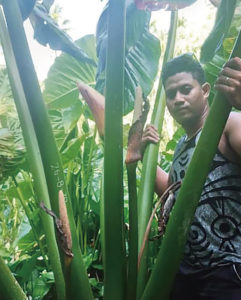 This article describes one of Tuvalu’s renown intangible cultural heritages – the cultivation of pulaka. Pulaka (Tuvaluan) is known by different names in other countries, such as babai in Kiribati or via in Fiji, and also has different monikers in other countries like the Marshall Islands, and the Federated States of Micronesia (FSM)—Korsae, Pohnpei, Chuuk, and Yap. Its scientific name is Cyrtosperma chamissonis and its common English name is the “giant swamp taro.”
Pulaka is the traditional root crop for the people of the atolls but is also found in volcanic lands like Fiji, Pohnpei, Vanuatu, and others. In the latter case pulaka provided a vital source of food in times of shortages.

Tuvalu is an atoll nation made up of five coral atolls and four raised atolls. The raised atolls do not have lagoons while the others have lagoons surrounded by
small islets. Among Tuvalu’s intangible cultural heritage landmarks are the unique pulaka burrow-pits. On each of the eight main islands of Tuvalu one will find these burrow-pits located close to the main settlements; they can also be found on other small islets surrounding the lagoons. Atoll soils are porous and relatively poor for crop cultivation. Thus, since the ancestors of Tuvalu settled the islands, they dug burrows deep enough to reach ground water. The pulaka pits vary in size, from around 5 x 30 m to 10 x 60 m. In some cases, burrow-pits can be as much as 10 m deep. On Niutao, the third island from the north, there is what they call te pela—a traditional site for cultivating pulaka. Te pela are dug just a meter deep, unlike the traditional burrow-pits in Niutao that usually go down around 7–8 m below the surface.

How then did our ancestors cultivate the pulaka in these burrow-pits? There are no clear records of the technology they used then, neither are there proven records of how they dug these pits so deep. But conventional observation plus the continuation of the art of cultivating pulaka to the present day yields knowledge of how ancestors created a burrow-pit environment that was conducive to growing pulaka. After having dug the burrow-pits to levels where brackish ground water stands, dark soil and organic compost were then placed at the bottom in several layers. The organic compost was mainly composed of green leaf, and rotten coconut trunks and leaves. Over the years this organic compost became very rich soil ideal for cultivating pulaka. Absolutely no fertilizer was used.
Not so long ago, with advances in technology, the government pursued innovative agricultural projects aimed at building the resilience of the communities of Tuvalu, and some islands ventured into adapting the traditional pulaka burrow-pits into concrete-lined pits around 2 m below the surface. For a few months, organic compost was left in these concrete pits. This concrete pits somehow made the cultivation of pulaka easier, but whether the quality of the main tuber of the pulaka is the same as that cultivated in traditional burrow-pits is yet to be tested. 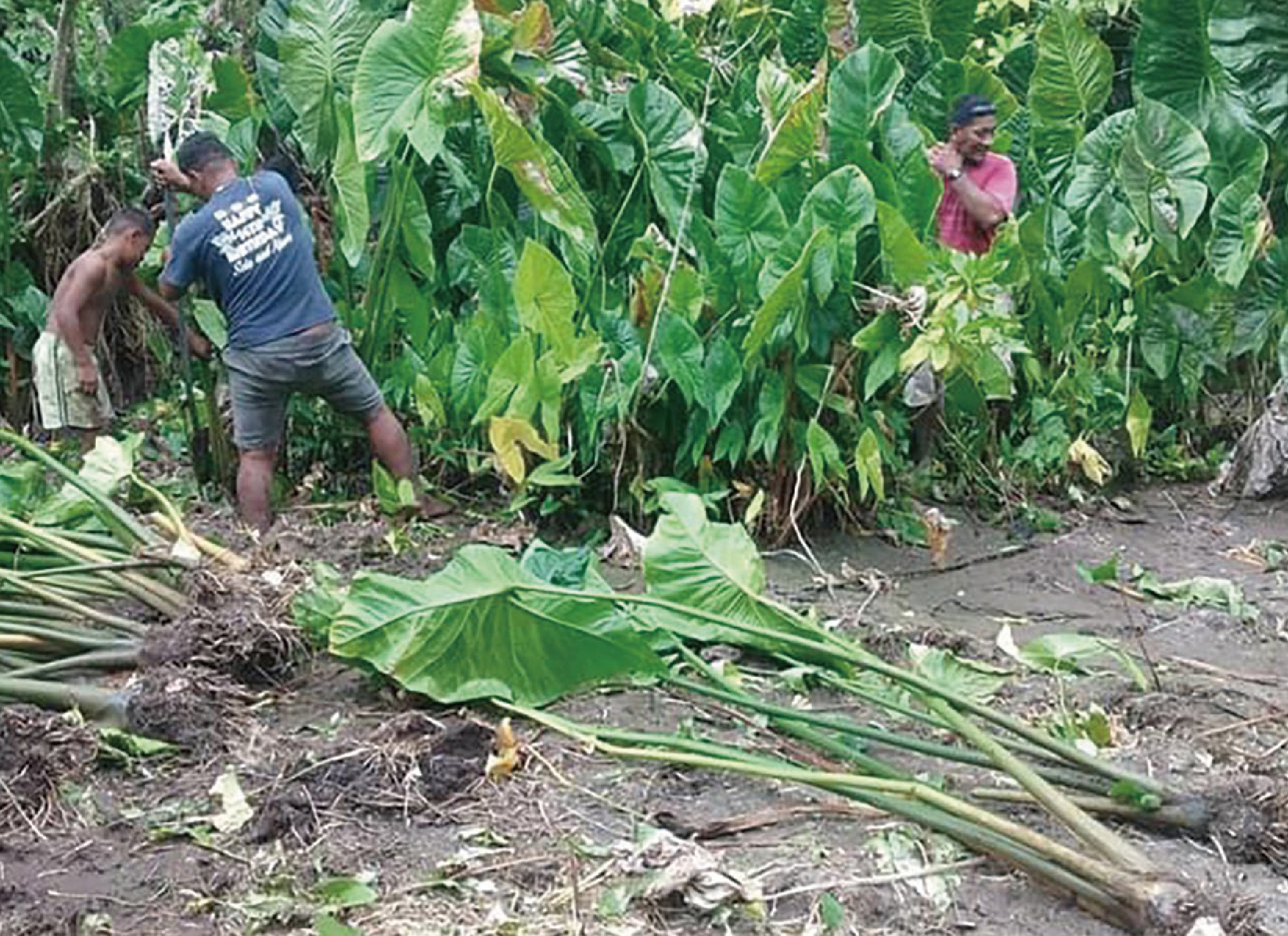 Cultivating pulaka is an art. In Tuvalu, transmission of this art is quite secretive and, traditionally, knowledge is passed from father to son. This shows that there are many ways or styles of cultivating pulaka given that each family may have its own secrets. Many people share their pulaka cultivating knowledge and skills, but again it is traditionally believed that even when pulaka cultivation experts go public sharing their “style,” people will always say “Yes, but they still keep certain secrets!” Nonetheless, the accounts provided herein in terms of the cultivation of pulaka are my own, having practiced it in partnership with my father and elder brothers, as well as having served as Director of Agriculture in Tuvalu from 1980 to 1984 where I acquired knowledge from other key pulaka farmers in Tuvalu and beyond.

What is illustrated here gives the reader an idea of cultivation practices, but is not necessarily the cultivating technology used by all. There are a number of pulaka varieties but generally in Tuvalu they are categorized into two main types: ikalaoi and tuatiti, both of which are made up of different varieties. This article describes the process applied to ikalaoi. Tuatiti, on the other hand, is cultivated simply by manuring the pulaka plot (each farmer’s share of the community pulaka pit is regarded as a plot). It is advocated that the more time in a year you cover your plot with compost, the greater your tuatiti crop grow in size. However, a renowned pulaka grower is rated by the number of ikalaoi they cultivate in their plot. 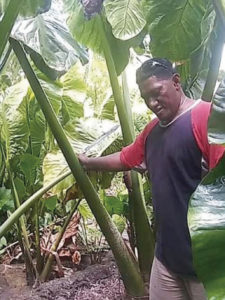 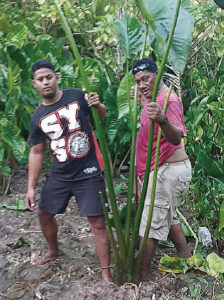 Ikalaoi is the main crop cultivated in a well-manured titi—a pulaka circled hole around 1 m in diameter dug down to the water-table floor. These holes are manured using dark muddy soil with organic leafy compost. The ikalaoi seedling is then planted. There are two types of seedlings—a young ikalaoi shoot or a stem of a matured crop after cutting the “root” (the edible part of the pulaka crop). The seedling is then covered with organic compost soil to a level around 50 cm from the water-table floor (this water table normally sits on hard rock). After covering with organic compost soil, the grower must use their feet to push the soil down around the seedling. There is one important tactic in order to give the ikalaoi a
nice shape (called kauli kuoga), and that is to make sure the seedling from a harvested crop is placed firmly onto the hard rock water-table base; additionally, when pushing down the soil with your feet, the plant must always stand firm. In this way you will get a beautiful oval kauli kuoga with a diameter at the center of the root of around 30–50 cm.

From planting the seedling to harvesting time, the owner of the crop will then feed each ikalaoi according to the sprouting of a new leaf. Again, the feeding technology is kept secret within a family but, in general, pulaka farmers would feed their crop (individually) using either green or brown leafy compost placed around 40 cm below the soil at a position opposite the front of the new leaf. The choice of the green and brown compost is another family secret. When the corm or tuber of the ikalaoi reaches around 30–50 cm high, the area surrounding the crop is fenced with woven brown coconut
leaves to a diameter of 1–2 m. When this is done, all the remaining feeding of the crop is performed within this fence.

It may be inferred following the presentation in this article so far that pulaka cultivation is very environmentally friendly and sustainable. Certainly, it is a traditional art of cultivation that boasts the positive features of a resilient environment and can help in the fight against climate change. 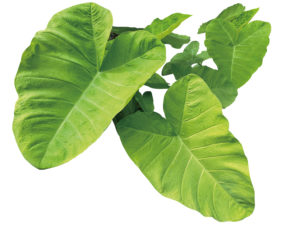 To conclude the presentation on this Tuvalu intangible
cultural heritage, we will now focus on the art of harvesting. Ikalaoi can take as much as ten years to grow, depending on how the farmer chooses to manage their crop. Pulaka corms of as high as 1–2 m were traditionally displayed during important festivities. Skilled growers will have no rotten portion in their corms and the diameter across the corm could reach over 50 cm. Tuatiti when harvested usually stands around 60–70 cm high with a diameter of 50 cm or thereabouts. The pulaka crop is mature enough for harvest when it has around three or four leaves left. A grower will normally stop feeding an ikalaoi if they want to harvest that crop. For tuatiti, three leaves remaining is the sign the crop is mature enough for harvesting.

The traditional harvesting of the crop is an example of sustainability espoused in the cultivation of pulaka passed on from our forefathers. A skilled, hardworking farmer would normally walk around their pulaka plot searching for crops with three leaves remaining. A lazy farmer, on the other hand, would just walk into his plot and start harvesting no matter the number of leaves remaining on each plant. This three-leaf crop is particularly important for the tuatiti that is normally used in the Tuvalu delicacy fekei—mashed pulaka mixed with red toddy syrup before baking, and with coconut cream mixed in when cooked.