Safeguarding ICH at Viharas in Nepal during the Month of Gunla

Nepal boasts an abundance of temples, monasteries (or viharas), and other socio-cultural places where various ICH practices are performed. Here, various forms of religious and non-religious activities take place on a daily basis; but during special festivals and occasions, they are transformed into workshops of ICH practice. This article will touch upon the annual activities at the Buddhist viharas of Kathmandu Valley during the holy month of Gunla (August–September).
The word “Gunla,” translated directly from Newa Bhasa, the language of the Newar community who celebrate the festivals, literally means the tenth month. This time is considered sacred and culturally rich by the Newar Buddhist communities, especially those living in the three Kathmandu Valley cities of Patan, Kathmandu, and Bhaktapur, with as many as thirteen festivals celebrated within the month. Devotees spend the month engaged in activities such as reciting religious hymns, reading holy scriptures, and making early morning pilgrimages to religious stupas and shrines collectively in their local areas. Many people make donations, take oaths, and refrain from the consumption of non-vegetarian food and alcohol. The activities of this sacred month allow the devotees to collect punya or merits to lead them along the path of virtuosity and righteousness. The community members take on various roles for the coordination of the festival. The main activity is to visit various other stupas, shrines, and monasteries, as well as the main shrine in their respective cities in a procession. During this whole month the Newar community gather at their respective viharas early in the morning after a cleansing bath. At the break of dawn, the viharas come alive with the hustle and bustle of community members all gathering to perform their assigned tasks and commence their pilgrimage. In the past, people wore traditional attire for the procession; however, in more recent times a dress code is prescribed for the community members: a standard t-shirt is printed with the logo of the vihara, displaying the congregation the wearer belongs to.
The procession is led by a group of musicians, playing cultural music with traditional instruments like the dhaa (double-sided drum, hung from the neck and played by striking with a stick on the right side while the left side is struck by the hands), taa (small cymbal), bhusya (large cymbal), naykhin (small drum), chhusya and payentah (traditional long trumpets), collectively referred to as the Gunla Baja. In Kathmandu the community gather early in the morning, around 5 A.M., and they reach the most sacred Svayambhu Maha chaitya (shrine), set on top of a hill, around 7 A.M. Living close to this shrine, I can hear the captivating, melodious, and powerful sound of the musical instruments from my house. Sometimes, the sounds compel me to walk up the hill to partake in these holy activities, to watch the devotion of the community, as the young and the old join together in celebration. Such activities can elicit in the viewer a spiritual trance.
The sight that greets you at Svayambhu is quite a spectacle. Various groups gather, each playing their instruments, some reciting hymns, and some performing cultural dances in devotion while other members offer water to the pilgrims. It is a captivating sight, and the powerful music engulfs you with equal devotion as the pilgrims. After circling the stupa, the procession descends down the hill and the participants go back to their respective vihara. Here they share a community breakfast, sponsored by one of the members.
A very special event during this month is Bahi deo Bwoyegu, the displaying of the various deities of the vihara, especially the main deity, the Dipankara. The deities are exhibited in the courtyard of the vihara for a few days and numerous people visiting as part of the pilgrimage make offerings in cash or kind. This activity not only displays the wealth of the community but also fosters community safeguarding of the religious images and other precious and semi-precious objects, as well as a sense of pride and trust among community members. Some take turns to sleep in the vihara during the time the deities and other precious objects are exhibited. 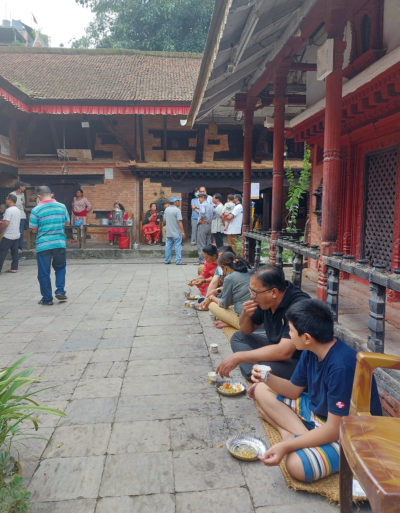 The elder female members, who are unable to join the procession, spend the month making small votive stupas from molds with black clay. This can be performed in groups at the vihara or individually at their homes according to their comfort level. At the end of the month these devotional clay objects are placed on trays and, led by a musical procession, are immersed in the river, an act of showing harmony with nature.
Since this is a period of veneration and devotion to collect merit and help others, different kinds of donations are made. Among them a popular one is the pancha-daan, or the donation of five materials: rice grains, unhusked rice grains, salt, money, and pulses. These materials are necessary for survival and can easily be stored and consumed. Sometimes they are substituted with fruits and vegetables as well. The practice of donation encourages the act of removing attachments to our material wealth, paving the path to spiritual wellbeing. The period ends with a festival called the Paru Bhoye, which marks the completion of the sacred month, accompanied with a big feast and merry-making.
The viharas serve as an education center even before Gunla. They conduct classes for youth to learn the various musical instruments and dances, while older members practice their respective instruments in groups or solo. During other months the vihara holds various classes to teach traditional language writing, conducts free clinics, and undertakes many other such philanthropic activities, which help bring the community together. Such activities foster the continuation of ICH practices, ensuring their longevity. They also generate community participation, which nurtures harmony, respect, and closeness. As each person is held responsible for one or various tasks, they are also being groomed to become responsible community members.
Mostly, these spaces serve as places of identity, where each member individually or as a collective can take pride in their common heritage. And in such ways, ICH spaces also serve as workshops for the practice, continuity, and longevity of ICH practices, while also maintaining the relation with and valuing the tangible heritage elements.