Safeguarding ICH in the Face of Natural Disaster: The Healing Power of Culture

The 2003 Convention for the Safeguarding of the Intangible Cultural Heritage of Humanity aims at safeguarding ICH for its own sake. However, it can also bring other benefits. This article describes how safeguarding and transmission of ICH—in this case traditional performing arts—revived the spirit and enthusiasm of the children of Aceh in the wake of the terrible tsunami that struck the Indonesian province in December 2004.
The tsunami of 26 December 2004 was preceded by an earthquake that struck at 07:59 Western Indonesian Time, measuring 9.3 on the Richter scale with its epicenter at a depth of 30 km off the west coast of northern Sumatra. The earthquake generated waves 30 m high that traveled at a speed of 100 m/s, or 360 km/h. This huge and powerful tsunami struck the coast of Aceh Province, drowning people and animals, devastating residential, agricultural, and commercial land over a wide area, and it even dragged a large generator ship, PLTD Apung 1, several kilometers inland where it remains today as a museum. It is estimated that 333,000 km3 of water was displaced in the Indian Ocean. Miraculously, the thirteenth-century Baiturrahman Grand Mosque in the center of Banda Aceh City was not destroyed, though most of the surrounding area for miles around suffered extensive damage.
It is estimated that 230,000 people lost their lives in Aceh Province as a result of this disaster. In addition, as many as 500,000 lost their homes and were displaced. The UN considers this one of the worst natural disasters in history. As well as Indonesia, tsunamis from the same earthquake damaged coastal areas all around the Indian Ocean. Besides the massive, tragic loss of life and property, the tsunami impacted many ICH elements and practices.
Immediately following the tsunami, national and international rescue teams concentrated on saving lives and treating, housing, and feeding the hundreds of thousands of people displaced by the disaster. Later, the question arose of what to do about all those suffering from post-traumatic stress disorder (PTSD) due to loss of family members, homes, and livelihoods. It was noted: “The rebuilding and reconstruction of physical interventions provided only the framework for the society as a whole to recover in the aftermath of the December 2004 tsunami. Uplifting the heart, soul and spirit of the tsunami-affected people was a vital element of the recovery process and this was made possible through the healing power of culture.”1 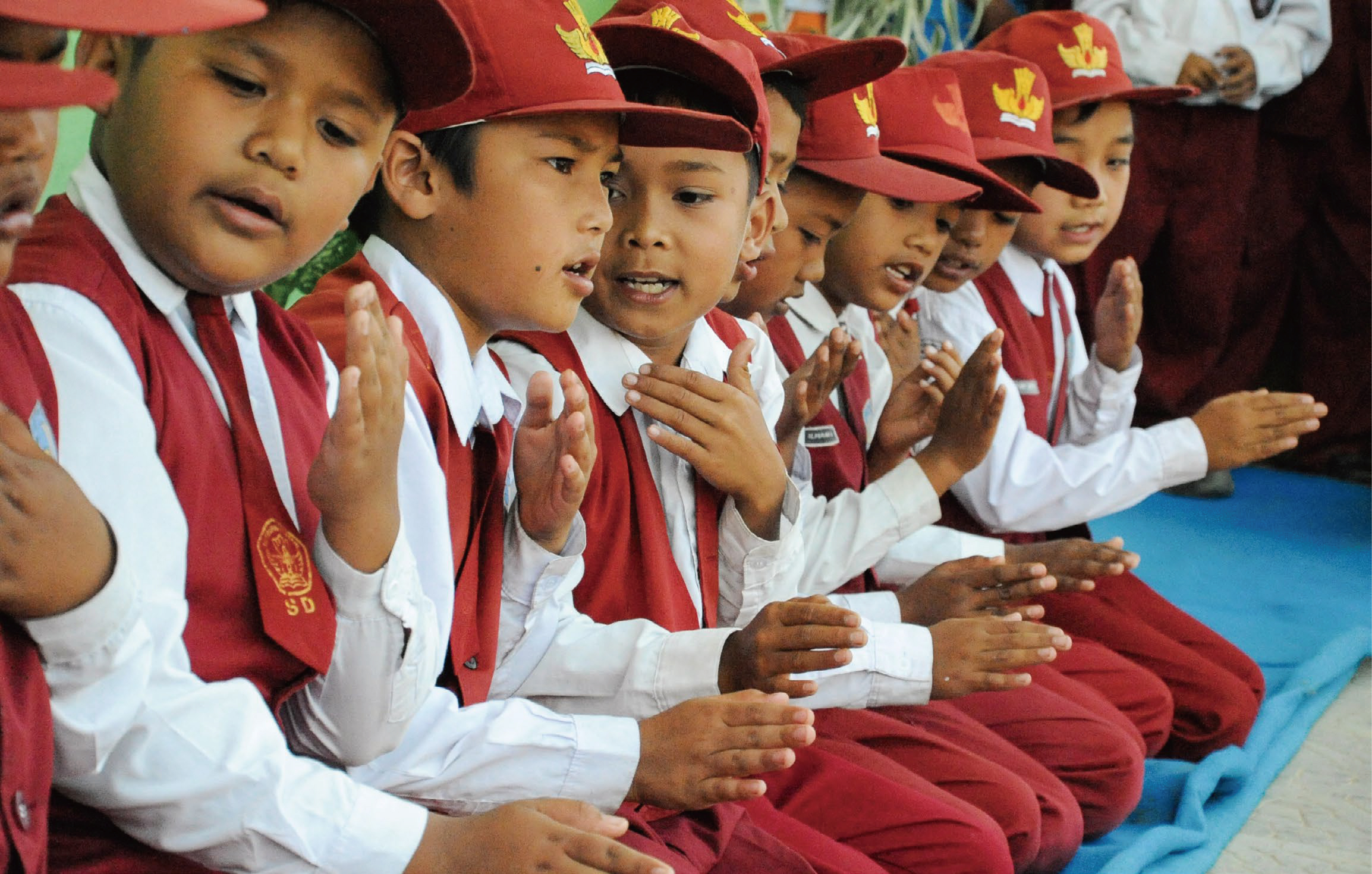 Sacred Bridge Foundation (an NGO), in collaboration with UNESCO Jakarta Office (Ms. Himalchuli Gurung), the Reconstruction and Rehabilitation Bureau of Aceh, and the Ministry of Culture and Tourism of Indonesia, came up with a project using ICH to help rehabilitate the many people of Aceh who were suffering, including with PTSD, following the tsunami. The project would at the same time safeguard and revive the transmission of elements of the ICH of Aceh that had been disrupted by the tsunami. There have been similar projects in other places affected by tragedy. One noteworthy example was carried out by Ms. Reme Sakr of the Syria Foundation, who utilized traditional Syrian handicrafts and puppetry to rehabilitate people traumatized by conflicts in the region. Syrian shadow puppetry is inscribed on the UNESCO Urgent Safeguarding List.
Sacred Bridge Foundation was founded in Jakarta, Indonesia, in 1998. Since the beginning, the not-for-profit cultural organization has been a home to individuals of diﬀerent generations with distinct backgrounds and expertise.
Umar Kayam, Islamic scholar Nurcholish Madjid, sociologist Stephen Hill, composer and musician Stomu Yamash’ta, architect Roby Soelarto,  ethnomusicologist Franki Raden, anthropologist Tony Rudyansyah, and economist Serrano Sianturi. Sacred Bridge celebrates life through the arts, believing that art can be a universal language. The organization was recognized as a cultural counterpart by UNESCO in 2000. It often organizes exhibitions and concerts, for example, showcasing artists who have special needs.
The Aceh project was called Rising Above the Tsunami (RAT-1) and comprised psychotherapeutic healing through local arts and culture, with the goal of the project, simply stated, “to use culture as a tool to heal and revive the spirit of the children of Aceh.”2 It was initiated by Sianturi and was carried out in two phases: Phase 1 from February until May 2005, and Phase 2 from 26 December 2005 until 12 February 2006.3
The opening of one of the main programs was a teaching clinic held on 21 January 2006 at Tikar Pandan, Ulee Kareng, Banda Aceh. Project training sessions have been published on YouTube (https://youtu.be/sly0KFnAtiI) to bring them to a wider audience.
Aceh Province has a rich seam of ICH in the form of oral traditions, performing arts, customs and traditions, knowledge of nature and the universe, and  traditional handicrafts. 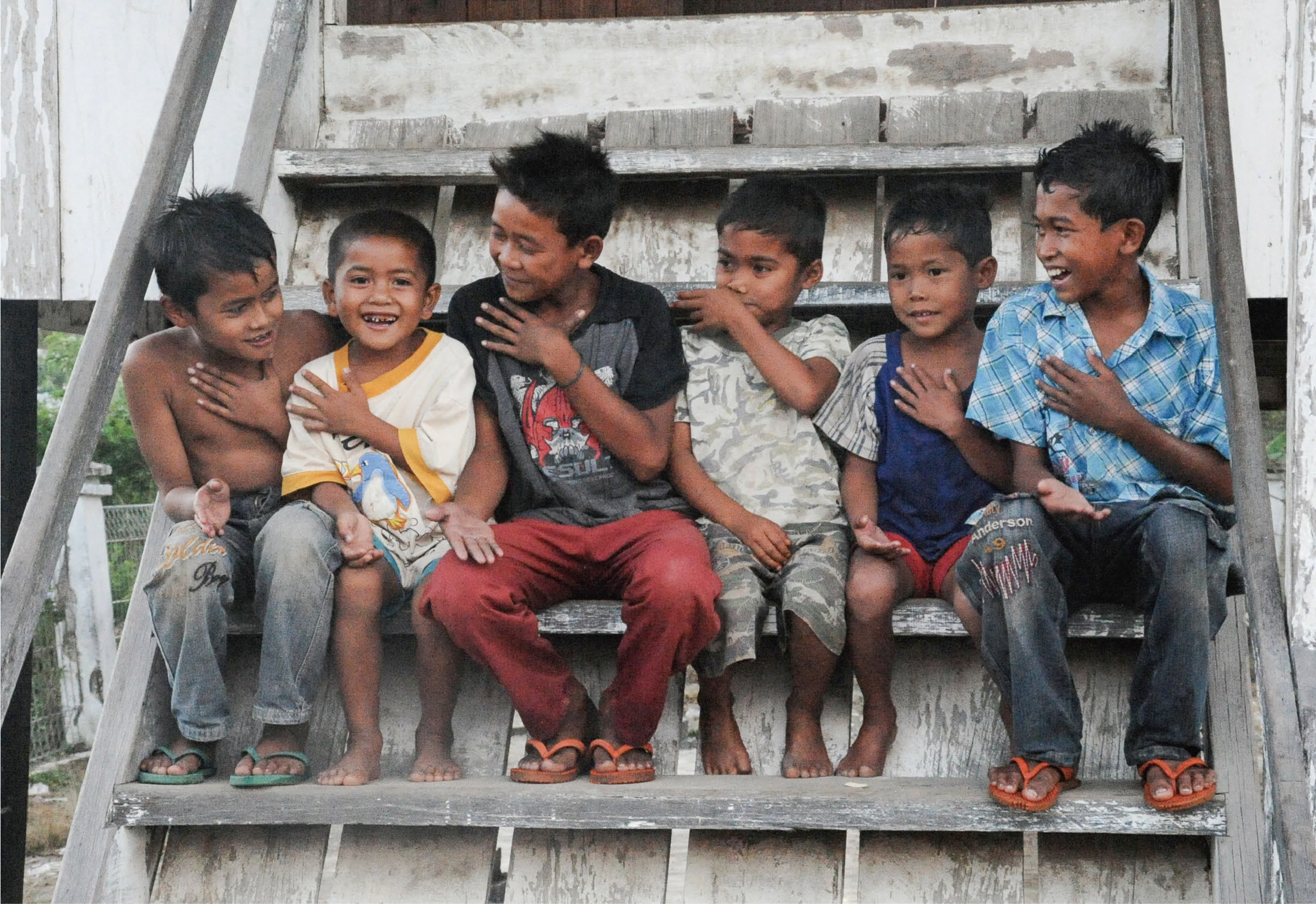 Boys playing Saman on the steps of the Mersah dormitory © Centre for Research and Development of Culture, Indonesia

The saman dance is one of those ICH elements from Aceh that was inscribed on the Urgent Safeguarding List in 2011. The ICH elements taught by maestros of Acehnese culture and presented by children under their guidance as part of the RAT project included performing arts such as the rapa’i percussion instrument, the saman and seudati dances for boys and men, and the ratoe jaro and tari pukat dances for girls and women.
The project involved gathering together children from Aceh, in particular but not exclusively those traumatized in the wake of the tsunami, and educating and training them in the local traditional performing arts mentioned above, along with the wisdom contained within the accompanying songs.
At the culmination of the project, in May 2006 forty children and twelve local artists from Aceh who had participated in the project traveled to Jakarta and, as a closing event, gave a performance and presentation of various results of the field clinics that had been held. This performance was given in the Ministry of Culture and Tourism’s Balairung Sapta Pesona Auditorium on 9 May 2006, and was attended by the (then) Minister of Culture and Tourism, Ir. Jero Wacik, SE.4 The performance demonstrated the non-formal method of transmission of Aceh’s traditional culture from one generation to the next—in this case, from the maestros to the children.
The project was met with approval by the then director of the UNESCO Jakarta Office, Stephen Hill, as expressed in a speech delivered on his behalf by Linda Posadas. The Minister of Culture and Tourism, Jero Wacik, also conveyed his appreciation in his speech that opened the event. The Liputan6 news agency commented: “The children were invited to join in training in the seudati dance. Besides the religious nature of the lyrics of its song, this dance utilized the children’s energy and required their concentration. Thus, the dancers were not able to think of any other things.”5 After participating in this project, the children, who had previously been traumatized, depressed, withdrawn, and unenthusiastic, regained their youthful spirit and began singing again, as young children normally do.
Transmission of traditional arts of Aceh did not cease at the end of this project, but has carried on with the support of the provincial, district, and municipal government. It is hoped that safeguarding and transmission of ICH in Aceh will continue into the future.