Indigenous communities around the world are bearers of strong traditional culture, art, craft, and knowledge of the environment, together termed by UNESCO as intangible cultural heritage (ICH). A fascinating characteristic of ICH is that it is constantly evolving and adapting to its changing physical, social, and economic environment, and in this way can be described as “living heritage.” 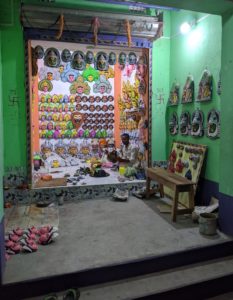 The cultural diversity of indigenous people in India is vast, with distinct social and cultural traditions that are rooted in collective ties, land ownership through generations, and a cultural rootedness and integral relationship with the natural environment. Traditional spaces of ICH practice are of utmost importance. In India, these spaces are usually the villages where traditional practitioner communities reside and practice their art and crafts for generations. The foremost feature of indigenous ICH is that it is integral to a community’s culture, way of life, social values, and traditional professions. Hence, the villages are found to be cohesive units within which the specific forms are embedded from distant history.

However, due to the loss of traditional contexts and markets, these communities have suffered severe marginalization, isolation, devaluation, and decline of their traditional creative skills and expressions. With their skills and creativity fading, rural practitioners have been leaving their villages and coming to cities to find work as daily wage earners or menial laborers. This has threatened the ICH further, with skills dying out and traditions being disowned by the practitioners themselves due to lack of economic, social, cultural, and emotional viability in the modern world. Younger generations increasingly do not learn these skills, leading to the loss of the practices.
Since independence, national policy and programs in India, along with a strong cohort of ICH patrons and social reformers, have contributed much toward revitalizing indigenous art and craft forms through promotion, market creation, training, technical facilities, and so on. In the process, the artists have come out of their traditional spaces to sell, collaborate, perform, and deliver their ICH products to urban consumers, nationally and internationally. However, the actual spaces where the artist was born, encultured, and originally worked have remained derelict, thus breaking the traditional cultural ties of the artists with their own habitats, which originally shaped their ICH forms. 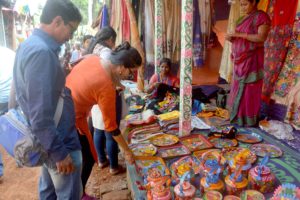 While working in rural Bengal with traditional ICH forms, Banglanatak dot com aimed to professionalize traditional cultural skills and empower folk practitioners through rural creative entrepreneurship under its Art for Life (AFL) program. As part of this initiative, it was stressed how essential the local or traditional community space for learning, continuing, and practicing the art was to the sustenance of the ICH. The on-ground work focused on revitalizing the art traditions through strengthening skill transmission, documentation, and promotion; empowering artists with skills and resources for creative enterprise development; and transforming villages into vibrant cultural hubs. This holistic approach that pivoted all the development and safeguarding activities in the rural space of the ICH forms led to a sea change, transforming these villages into active collective ICH spaces for practice, collaboration, and promotion.

As the program focused on building a strong cultural identity and recognition of the creative communities, it was essential to promote the artists’ villages as spaces for genesis, evolution, and survival of the ICH. The process was based on a multipronged strategy of creating appropriate infrastructure, training the resident communities in making their villages interesting and educational for visitors, and proper branding and promotion signifying the integral link of the ICH with its traditional space.
Resource centers were established in the villages on communal land, which is also owned and managed by the community. These physical centers, equipped with basic infrastructural and IT facilities, have been designed with community participation to serve as active community spaces for practice, learning, training, exchange, exhibition, and demonstration of their ICH. These centers house community museums that were conceptualized, designed, and set up in collaboration with the actual bearers of those traditions and have become shared living heritage spaces. The museums, freely accessible to all, uphold the collective identity of the ICH forms and the tradition bearers. As the museums display textual and visual narratives of the community’s own knowledge, interpretations, life stories, and collective understanding of their own ICH, these centers have helped give a local context to the history, social significance, and cultural evolution of these traditions. 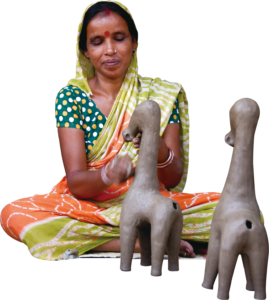 Eleven such museums, owned and managed by the respective communities, have been developed so far in West Bengal. These showcase Patachitra painting in Pingla (West Medinipur), chau dance of Balarampur and chau mask of Charida (Purulia), dokra metal craft in Bikna (Bankura), to name a few. Around these centers, annual village festivals were initiated by the AFL program to develop positive branding of these villages as the native community cultural and working spaces, and to see them featured on the cultural tourism map of Bengal. The host communities were also trained in maintaining cleanliness, hygienic conditions, and proper sanitation, which is vital for ensuring better local health and for hosting tourists. They learned to offer hospitality to visitors in simple, traditional ways, and how enhancing their practice and demonstration of the art forms would attract people.
Today there are nineteen artist villages, including those of scroll painters, mask makers, dancers, singers of different musical genres, wooden doll makers, and metal crafters, organizing annual three-day festivals. Each festival is unique for its natural and cultural environment, defined by the local ICH forms, and attracts tourists from near and far. The artists’ collectives take active part in the arrangements and also organize demonstration workshops for visitors, offer products for sale in the courtyards of their own homes, and organize folk performances in cultural programs. Students from schools and colleges, researchers, and educators visit the artist villages to learn about the rich cultural heritage and craft-making process, and to interact with the artists. Photographers, writers, and urban artists regularly visit these village ICH spaces for co-creation of artworks. People from local rural areas as well as cities enjoy the ambience and interactions with the artists. These festivals also provide platforms for networking and business as many craft retailers and cultural event organizers attend. 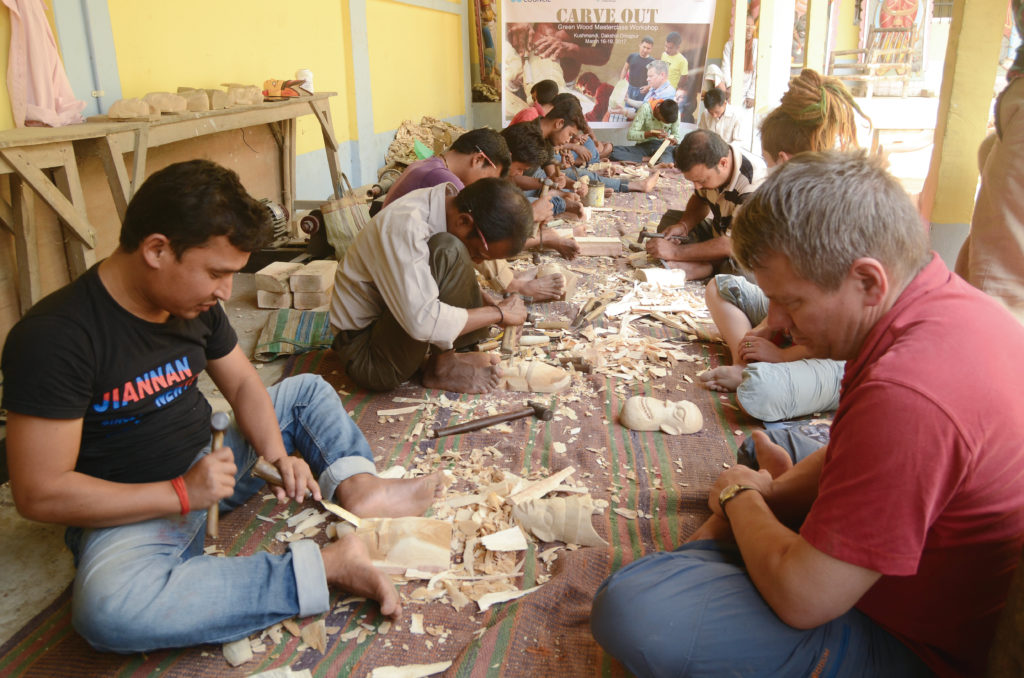 Over the last decade, many interesting village-based creative workshops and artist residencies have been organized between the village artists and national and international artists, resulting in joint collaborative events and exhibits showcasing unique products and performances. The village hubs of traditional music have become tourism destinations frequented by visitors from across the globe. The vibrancy and popularity of the villages have resulted in the younger generations coming forward to learn traditional skills and pursue careers in these fields. Walking into the village at any time of year can lead to an amazing experience of not only watching the skill sets and cultural forms of the ICH practitioners, but finding out how they work together in their homes and common village spaces in between daily household chores.
To make these ICH spaces more attractive as lively, colorful destinations of indigenous traditions and cultural forms, eight crafts of Bengal have been geographical indication registered, thus promoting not only the authenticity of a traditional cultural product but also creating an exclusive identity of the places where the makers reside.
Despite differences in the societal, institutional, and professional structures of the different ICH forms, AFL led to some fundamental changes everywhere, including meaningful employment, dignity of work, and creation of a collective community identity and a sense of pride. The initiatives gave momentum to the growth and vitality of the villages. It even reversed the trend of migration of rural artists from villages to cities. Today the village ICH spaces are comfortable abodes of the traditional artists who work in their homes and consider their villages as unique workspaces that the world admires.