Taumako, one of the Duff Islands, is a Polynesian island within the Santa Cruz group in Temotu Province to the southeast of the Solomon Islands, in the southwestern Pacific. Taumakoans speak the Veakau-Taumako language, which comes from the Samoic branch of Polynesian languages.
Taumakoans still practice ancient navigational techniques and are known for building a type of proa sailing canoe, the Tepuke, using local materials. They maintain traditional ways of living, relying heavily on subsistence farming and fishing. 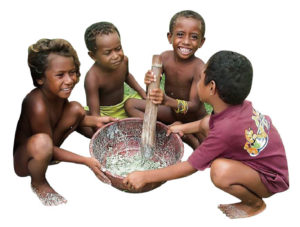 As a maritime island, Taumakoans depend upon sea transportation and marine resources to sustain themselves. They depend upon indigenous knowledge of island and ocean ecosystems, the use of plants and animals for food and medicine, and the annual and seasonal patterns of oceanic, climatic, and island phenomena. The people’s close relationship with nature helps them adapt to the weather and other natural phenomena in their voyaging and everyday living.
Inter-island trading using their Tepuke canoes brings food and the Santa Cruz red feather currency to sustain the livelihood, wealth, and prestige of the tribal leaders called Te Aliki. Food is distributed to the community during traditional feasts. The Tepuke is thus essential to the people of Taumako socially, economically, and culturally.
Children’s maturation rites are celebrated as traditional feasts, accompanied by dancing and singing. These rites mark stages of the lifecycle of an individual from conception to death, chronologically, such as a mother’s first pregnancy, an infant’s first cry at birth, the falling off of the umbilical cord stump (when the fishing party delivers the cord stump to a fish), taking a child outside of the house for the first time, and when an infant is taken to the houses of the close kin of the wife, opening the way for the child to their mother’s kinsmen.
Other rites observed include taking a child to bathe, cutting a child’s hair, and the making of a flattering comment by a non-relative. Series of feasts, dancing, and singing acknowledge marriage and the birth of a child, and relief at the mother’s safe recovery from the dangers of childbirth.
From a sociological point of view, the second series of maturation rites and food distribution and celebration is done by a contributor to the child’s bride price, to maintain a certain relationship of kinship with the child and to publicly display their sponsorship. The second series of observances include piercing of the child’s ear lobes, piercing of the nasal septum, piercing of the top of the ear helix (for the first child), and piercing of the top of the nostril for cosmetic purposes and decorative ornaments in traditional dancing, the donning of a strand of beads on the girl’s waist followed by wearing their first adult-style clothing, wearing of garments appropriate to adolescence considering modesty and genital exposure. 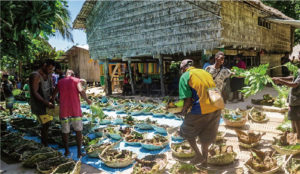 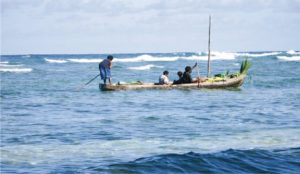 At adolescence, children are expected to know the accepted kinship role behaviors and to show respect and exhibit sociological maturity. Commonly, several of these observances are performed on several children at the same time and sponsors combine to hold all-night traditional dances at which turmeric is smeared on the children’s heads as a mark of honor and to indicate festivity. In another ritual, young men catch sharks and present bows and arrows (for fishing) and a traditional basket, Tanga Khamu, filled with betel nut, to the younger boys and girls in order to demonstrate they are ready to get married and to feed their family and be self-sufficient. Bride price ceremonies and mourning rituals are also observed on Taumako. Religion and pagan worship are observed by clans and tribal members who are linked to certain deities and totems that must not be eaten.
Legendary ancestor Lata, a cultural hero, was the first person on Taumako to build and sail a Tepuke canoe. His story is long, funny, and provoking. Lata befriended the Teube bird (pigeon) who showed him the right tree to fell for his Tepuke. On the Tepuke is a carved image of the Teube bird where the boom is stepped on at the bow, and this implies Lata’s presence as a guide and helper during voyages. Lata sailed away and never returned to Taumako when Hinora, the
goddess of the forest, closed the passage to Teveni because she was annoyed when Lata gave her a conch shell that would not make a sound when blown.
On Taumako, Lata’s story comes to life when women, men, and children work together to make a Tepuke canoe through the traditional concept of “Heihei lavoi”—living a peaceful and harmonious life in the community. There are no more Tepuke canoes on Taumako today, and there are only two older islanders still living who have the knowledge of Tepuke they could teach the young people. Taumako mariners are, therefore, appealing for help to build another Tepuke to perpetuate and safeguard the knowledge of sea voyaging for the next generation.