Thai Sea Gypsy Communities Sixteen Years On from the 2004 Tsunami

Countries all over the world are faced with increasing hazards and challenges due to climate change.
Earthquakes, volcanic eruptions, catastrophic storms, flooding, sea-level rise, drought, and more are becoming ever more common threats each year and the  problem appears to be without limits. Many disasters lead to people losing their homes, land, local resources, and livelihoods, and force them to relocate unwillingly.
The local wisdom of indigenous sea gypsies (also known as Chao Lay, sea nomads, or people of the sea) in southern Thailand enabled them to foresee the 2004 Indian Ocean earthquake and tsunami that swept away their villages, and most of them fled safely from the affected areas. After the tsunami, forty-six sea gypsy communities have faced new challenges and struggled in the face of a bigger wave threatening their centuries-old traditional way of living, in the form of disputes over land rights, ethnic discrimination, an expanding tourism industry that is rapidly replacing their fishery, as well as the world’s growing, complex risks. Thailand has fifty-six ethnic groups and indigenous peoples with a population of over six million including hill tribes in the north and west, and Chao Lay in five Andaman coastal provinces of Ranong, Phang Nga, Phuket, Krabi, and Satun in the southern part of the country. The islands and coastal regions along the eastern shores of the Andaman Sea are home to unique groups, the Moken, Moglan, and Urak Lawoi, with a total of forty-six indigenous communities of approximately fourteen thousand people. There is evidence that these sea dwellers have lived in these areas for at least three centuries, inheriting and passing on their way of life, wisdom, traditions, and culture from generation to generation. 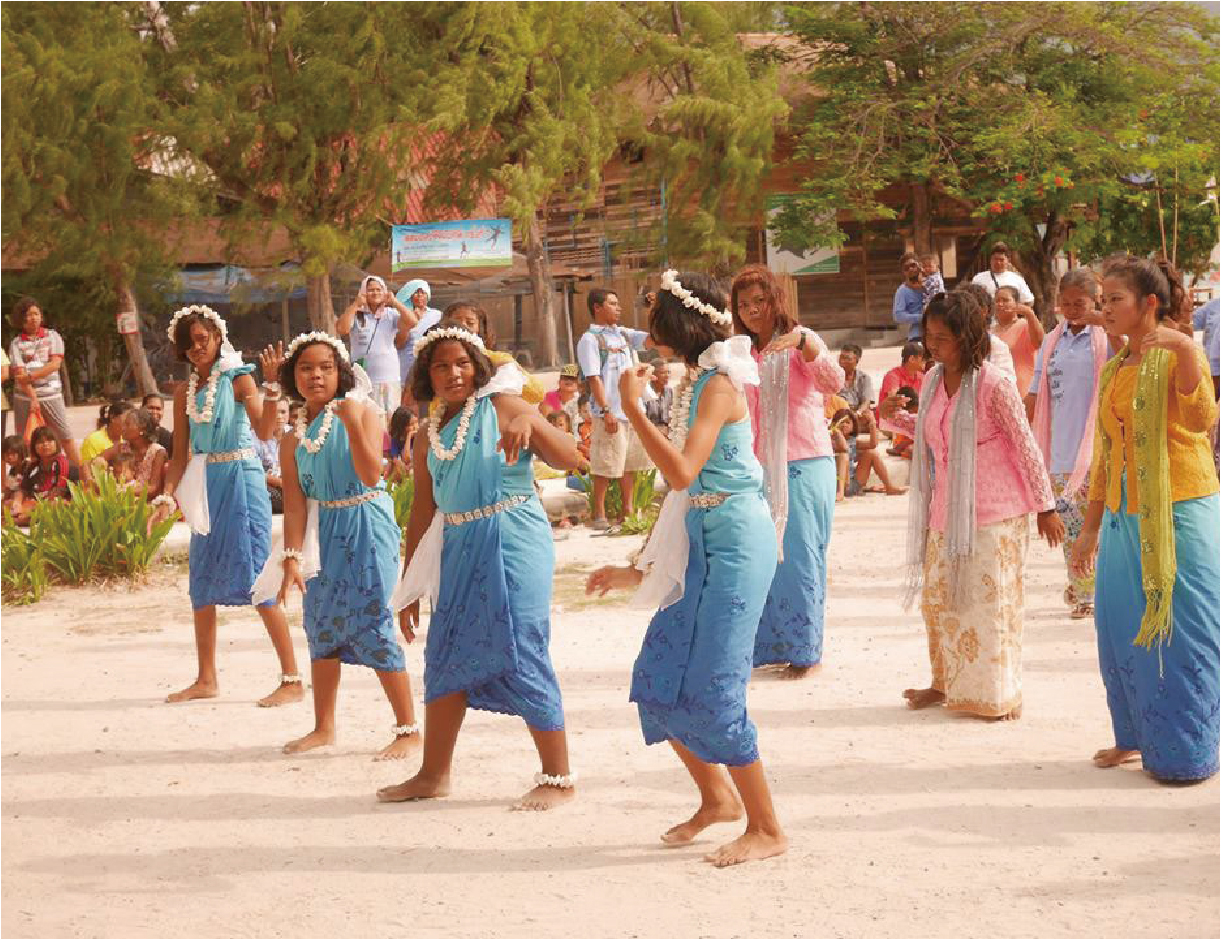 The performance of the young sea-gypsies to welcome foreign visitors. © TransboarderNews, Thailand

Most of the ethnic groups have a way of life based on natural resources; they rely mainly on the Andaman Sea for their livelihood, with some of them spending weeks at sea free diving and spear fishing. Some groups have a more settled life as they fish the Andaman Sea with traps of rattan and wire. Their traditional way of fishing has almost no ecological impact. They have a philosophical connection to the land on which they live as their ancestors’ burial sites and spiritual shrines are located there. Accordingly, their beliefs, traditions, cultures, and wisdom result in them being close to each other and profoundly bonded with  nature, which reflects their philosophy and way of living that differ from the rest of Thai society.
The Moken caught the world’s attention following the 2004 Indian Ocean earthquake and tsunami as the whole tribe safely fled the devastation by escaping to higher ground when they noticed the sea had receded. That served as a warning to them that a giant wave was coming; this is traditional wisdom contained in their lullabies, so all Moken recognize this sign of impending danger very well.
Since 1988, the government policy of promoting the tourism sector has prompted investors to buy land by the sea for speculation and future profit. The thirst for new development with the booming tourism industry set Chao Lay against developers with eyes on the land where the former’s ancestral homes, boats, and  shrines are located. Some land titles have been issued illegally and overlap with the dwellings of the indigenous habitation. In addition, the government’s legal declaration of national park and nature conservation areas, both on land and at sea, has inevitably resulted in limitations being imposed on the traditional fishing grounds and land use of indigenous people who have lived in the areas for generations.
This issue has affected indigenous lives, culture, and the existence of native groups in all aspects. There are serious concerns about the effects that the laws may have on the sea nomads’ ability to maintain their traditional culture and lifestyle. Ethnic groups and indigenous peoples are deprived not only of their rights in an unstable state, they are also socially marginalized, do not have title deeds and permits, and become vulnerable groups lacking legal status.
These problems have been accumulating for some time but were made more severe after the 2004 earthquake and tsunami. The affected indigenous communities gathered to bring their issues to the government to seek solutions and changes to national policy. They initiated the Tsunami Victim Community Network in the hope of strengthening the community and network and to develop their own proposals and to raise public awareness of their problems.
According to many studies, they identified nine issues, the first and foremost being housing insecurity. The other issues included spiritual spaces (such as cemeteries and holy sites for ceremonies), fishery rights, education, ethnic bias, children and youth, a lack of pride in their own language and culture, health and hygiene, and low levels of ID card possession among indigenous peoples.
Today, there is widespread acknowledgment of the need to involve local communities in the conservation around cultural landscapes and natural assets. Local communities have been in these areas long before the government, tourists, and conservationists. They have a lot to offer in terms of the management of these places thanks to their particular knowledge, skills, and traditions. Finding sustainable solutions that benefit indigenous communities and the environment while satisfying national tourism and development objectives has become a focus throughout coastal Thailand and many other regions of the world in the development of recovery plans after disasters. Finding the right balance among all these issues poses significant challenges for every country’s government and
policymakers.