This fabulous story provides humanity with a strong moral for harmonious and peaceful living, which offers real food for thought in this era of modernization and competition in the world. The story is one of many enchanting Jakarta tales of Lord Buddha; it is not only highly revered in Bhutan but also included in school curricula to teach deep human values to future generations. The story begins in a dense forest in the land of Kashi, where once lived a partridge, a rabbit, a monkey, and an elephant who became incredibly close friends despite their different sizes and species. The friendship was made possible the fact that they shared the same feeling of love and kindness for each other. Every day they helped each other find food and wholeheartedly shared everything they found.
One day they spoke to each other: “Although we’ve been friends for so long, we don’t know who is the oldest and who is the youngest among us. We should begin to respect our elders and treat our younger friends with kindness, so we must examine ourselves.” Amazingly, all the friends agreed to this joint proposal.
The next day, everyone gathered near a giant banyan tree (Ficus benghalensis). For the test, the partridge prompted his friends, “Look at this tree,” and asked, “Which of us saw the tree first?” The elephant answered, “When I was small and lived with my mother’s herd, I saw the tree, and it was just as big as I am.” The monkey followed his giant friend and said, “I also saw the tree, and it was as big as my body.” And the rabbit said, “I saw the tree as a sapling with only two tender leaves, and I licked the dew drops off those freshly grown leaves.” 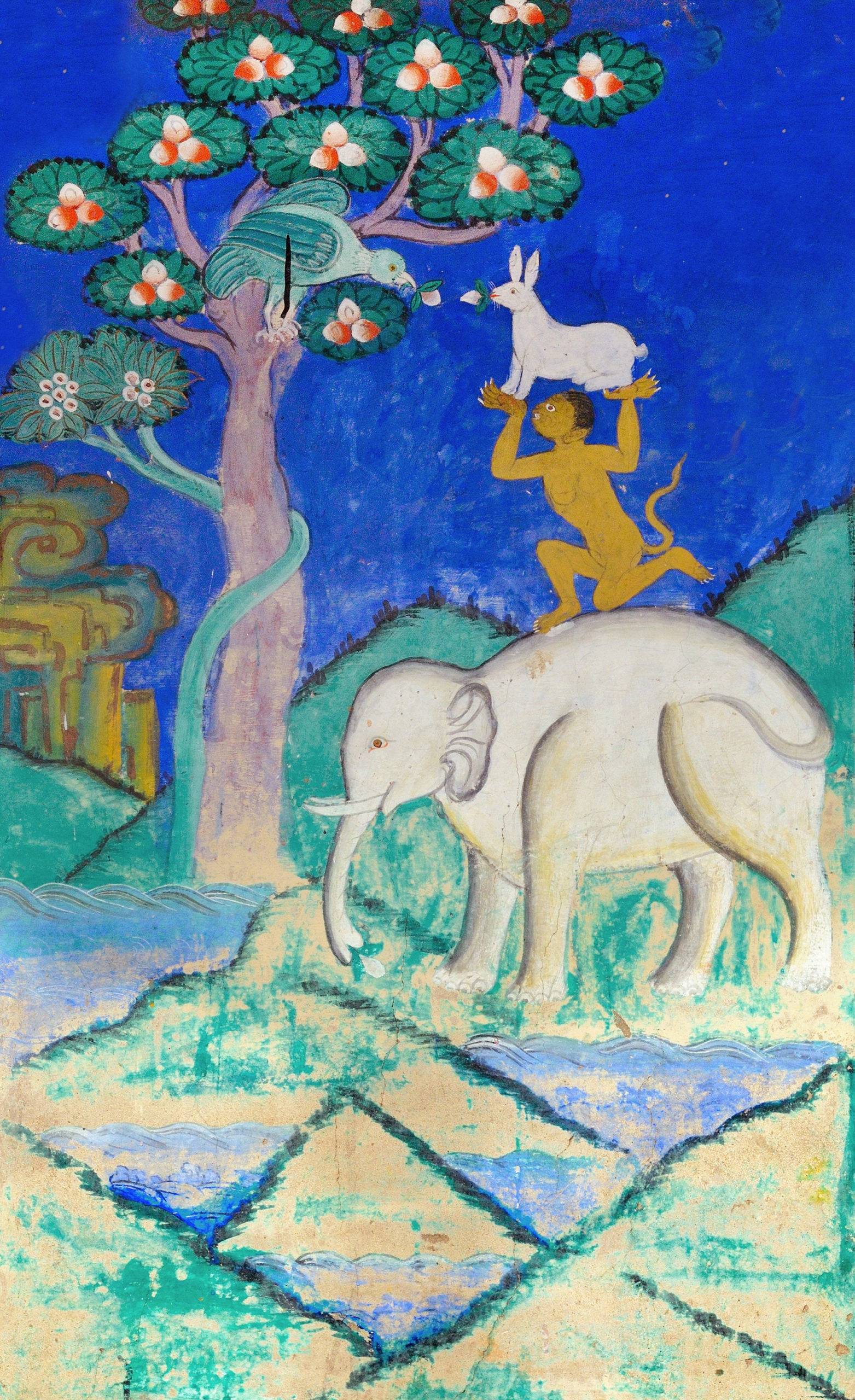 Buddhist fresco on the wall of a Tibetan monastery © ealisa, 123rf.com

After hearing these coincidences, the animals other than the partridge acknowledged the hierarchy of age. But surprisingly, the partridge, though the smallest, said, “I am the one who nibbled the juicy banyan fruit, and this is the tree that grew from the seed I left on the ground.” Knowing who was the eldest among them, the elephant paid respect to his three other friends; similarly, the monkey honored the rabbit and the partridge; and the rabbit honored the partridge because he was the oldest and most senior among them. After that, the eldest got the first part of the food they found, with each animal then taking its turn, maintaining the age hierarchy. When they went on perilous journeys, the youngest carried the elder, the monkey carried the rabbit and so on, with the partridge ultimately enjoying the privilege of reserving the highest seat.
On another occasion, the members discussed whether they should, besides respecting themselves, try to do at least some virtuous deeds. The partridge voluntarily stood up and suggested, “Until now, we have intentionally or unintentionally fed on the lives of other animals. Being a predator is an unvirtuous act, so let’s cultivate and be herbivores.” Immediately, the others spoke up, “Although we can avoid taking life, we sometimes feed on what is not really ours. This is an act of possession that is not granted or by permission, so from now on we will not commit ourselves to consume anything that is not given or offered.” They then agreed not to be possessed of food, sexual misconduct, and untruthfulness, and also to renounce the consumption of intoxicants, especially alcohol.
The four friends committed themselves to the Basic Five Virtues Law they imposed on each other. One day, the oldest friend, the partridge, asked the rest of his friends, “Let’s make other friends besides ourselves abide by our rules—who among us can bring their friends under this law?” The monkey replied, “I can make all my fellows abide.” Similarly, the rabbit and the elephant also assured the others that their friends would follow the rules. Gradually, all the animals came to obey the fundamental law, which led to a spell of favorable weather that not only brought abundant fruit and harvests to the animal world but also enabled humankind to live in harmony.
The King, fascinated by the unusual, auspicious signs, called his queens, ministers, young men, and merchants to inquire about the cause of this good luck, but no one could give an answer. One day, the King met a hermit who lived in the seclusion of the forest and could predict everything, and asked him the same question. The hermit said, “All these auspicious signs are due to the virtuous behavior of the animals that live in your forest.” Although the King was surprised by this news and wanted to see the animals, the hermit urged him to make his countrymen obey the law of animals: not to kill, not to steal, not to commit misconduct, not to be dishonest, and not to engage in the consumption of intoxicants. As advised, the King instructed all his citizens to obey the law, which had originally been established by the four noble animal friends. Finally, the King, the people, and the animals experienced an unbreakable peace, tranquility, and blissful life in the present, which they continued to enjoy even as heavenly beings after their deaths.
In order to obtain their blessings, attract good fortune, and remember the rules of good conduct set by the four noble friends, many people, especially Buddhists, like to use the symbols of these animals in their homes, schools, and also in most religious institutions.