The Impact of Tais in Timor-Leste: Culture with Unlimited Space

Ceremonial cloths known as Tais have been woven in Timor-Leste for generations. From the time of the Timorese ancestors, women have learned how to make Tais for use in traditional ceremonies, such as weddings. It is seen as important for women to transmit this knowledge for the future generations, and thus the technique has been passed down from mother to daughter for centuries. The weaving tradition is considered a key social function as it strengthens familial bonds. For Timorese, Tais is strongly connected with local tradition and its weaving is seen as not only a local practice but part of the national identity. The designs and techniques record a woven narration of the culture, lore, paradigms, and stories of Timor-Leste’s history.
Both weaving and dyeing are intimate social processes, usually done by groups of women, who often find themselves isolated in villages from both a social and economic perspective. They usually work together as a team to attain a common goal. This reflects the broader social structure in Timor-Leste, where people built their societies on a system of connectedness and community, a set of values and beliefs centered on kinship, ceremony, and spirituality, often through weaving. 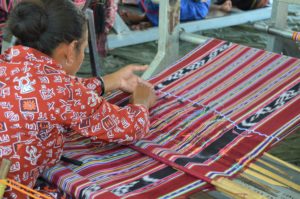 Tais competition event lead by Minister of Tourism Commerce and Industry Timor-Leste, on the occasion celebration
of the Popular Consultation Day, 30 August 2022. The event was held during a week from 22 – 26 August 2022.
© Abraão Ribeiro Mendonça

In some places, weaving practice as mutual cooperation and the transmission of weaving knowledge from mother to daughter are interwoven with a cultural system of collaboration and respect, in which women, men, and young people work together to share cultural practices in a way that benefits the entire community. For instance, during the 2006 political conflict, women fled to camps for internally displaced people with their looms and continued to weave. This determination to keep weaving demonstrates the economic importance of the practice, as well as underlining its social significance, especially for women.
For many years, Tais was produced as a cultural activity and played a part in the local economy as an exchange commodity for barter before the introduction of money. As a traditional practice, weaving is considering vital to healing past traumas as well as being a creative outlet. It also helps by providing employment for marginalized women who face an uncertain future, such as widows. Most women living in villages are able to earn a living through weaving Tais, which is proof that women have an important role in terms of independence and leadership in lifting their family out of poverty.
Since Timor-Leste gained independence in 2002, Tais weaving has been rescued from the brink of extinction, and once again has risen to prominence as a symbol of cultural identity. It has successfully been revived in Lospalos, Viqueque and Baucau districts (in the eastern region of the country) among other places. Some weaving groups formed cooperatives, gathering the small number of weavers in their village, well representing the efforts of women to rebuild their communities. As well as being a vital source of income for women, these cooperatives play a major role in promoting the social and cultural significance of the weaving tradition. For instance, one of the weaver groups in Timor-Leste, Cooperative Lo’ud, was created by three women from the resistance movement. They gathered to pool their resources after the conflict had made them widows, and started producing Tais to earn money and improve their lives. 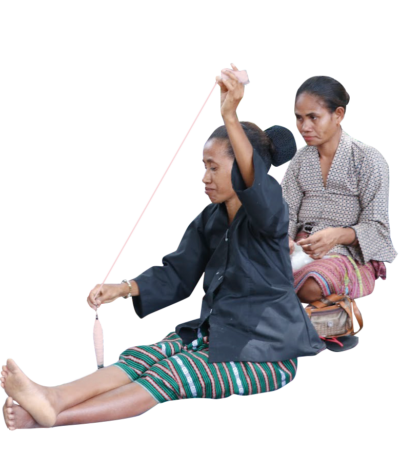 The raising of public awareness is one of the most important activities and an essential pillar of ICH transmission. The establishment of the Timor-Leste National Committee of Intangible Cultural Heritage (April 2019), which aims to promote and safeguarding national living heritage, was crucial. One successful mission was having Tais recognized by UNESCO in its urgent safeguarding list (14 December 2021). Since January 2022, the ICH Committee has organized several notable public events (Tais fair, festival, and exhibition as well as a Tais competition), with activities mainly taking place in Dili, the capital of the country. Groups of women and master weavers from different municipalities were involved in Tais demonstrations, product diversification, and displaying the overall process of weaving, including the natural way of dyeing and local cotton; they also showed how Tais is used in different ceremonies (weddings, funerals, rituals for harvesting rice, corn, and coffee, and for gifts/welcoming guests). A number of schools and student bodies (primary, pre-secondary, and secondary schools, and universities) were invited as the main target audience, with the aim of raising public awareness specifically among the younger generation about the importance local knowledge of Tais. As means of transmission, the various events and exhibitions had a positive outcome; not only did they help generate family income, they also stimulated increasing numbers of people to become involved in the weaving practices.
As demonstrated by the group of master weavers, the various municipalities differ in terms of traditional weaving techniques and ethnolinguistics. In one notable development, a new weavers’ network has been established across the municipalities; to encourage the weavers, the Minister of Tourism, Commerce and Industry, together with Secretary of State for Art and Culture, incorporated in the annual plan a National Day of Tais, further demonstrating the importance of weaving to the nation.