Togyzkumalaq Traditional Kazakh Board Game and Its Educational Potential

Zhansulu Issayeva
Project Consultant, The International Information and Networking Centre for Intangible Cultural Heritage in the Asia-Pacific Region under the auspices of UNESCO (ICHCAP)

Board games are an indispensable feature of get-togethers with family and friends. They are not only a fun way of spending quality time together, but are also scientifically proven to improve skills in all kinds of things from financial planning to empathy. Use of traditional board games can contribute to achieving the educational goals of cultural heritage.

There are various educational games that are imbued with cultural meaning and promote problem-solving skills across different cultures. On top of helping to develop the player’s mental, emotional, moral, and can contribute to enhancing knowledge about other cultures. Therefore, board games can be used as cost-effective instructional materials with the power to facilitate fun and rapid learning. Although some traditional board games have already been integrated into
game-based learning strategies, their practice and transmission are still at risk as a result of urbanization and the effects of digitalization.

Togyzkumalaq
Most Central Asian board games belong to the mancala family, which came to Central Asia via the Silk Road. At their core, these are turn-based games of strategy for two players. The goal is to capture the opponent’s pieces and accumulate more on one’s own side. Players use small stones, beans, or seeds, and play on rows of holes in the earth or other playing surfaces. Nowadays, these games are played on specially designed boards.

Togyzkumalaq is one of the games that belong to the mancala family and is considered to be one of the oldest Kazakh traditional board games, also known as toguz korgool in Kyrgyzstan. It is played in Kazakhstan, Kyrgyzstan, Tajikistan, in some parts of Uzbekistan, Turkmenistan, among the Kyrgyz people in northwestern Afghanistan, parts of Russia such as Altay, Khakassia, Sakha, Tartaria, Tuva, and by the Kazakh minority in western Mongolia and in northwestern China.

Togyzkumalaq is the only mancala variant with an official notation to record the moves that are made during the game. It is designed for logical and mathematical thinking, as well as endurance training. The game is based around the number nine, which is considered sacred among nomads of Central
Asia, and has major significance in folk beliefs. Some refer to this game as the “algebra of shepherds,” since it helps to develop verbal counting. The oldest togyzkumalaq boards, made of stone, date back to the sixteenth century; later they were carved in wood or produced out of plastic materials. Game sessions can last from thirty minutes to as long as five hours or more.

Educational Value
There is great potential in using games in creating a learning environment. Many studies have proven that using games to engage students in the process of learning can improve the quality of learning. Therefore, the idea of incorporating board games as educational tools is not novel. Some schools have
already implemented togyzkumalaq as an extracurricular activity or an additional class. Most of them stated that they were trying to introduce the culture of the Kazakh people by using folk games as a means of systematic education, and togyzkumalaq is a popular choice.

Togyzkumalaq plays a special role in the upbringing of the new generation since it creates challenges and goals, and teaches players to make meaningful decisions. Togyzkumalaq develops memory, attention, creativity, observation, and sequence of reasoning. It is especially important to teach this type of game to children who display attention deficit behaviors and have issues with concentration. It can help them to become calmer, more balanced, gain the ability to
overcome difficulties, and strive to achieve set objectives.

Traits such as patience and endurance are essential parts of togyzkumalaq. The game enhances the thinking capacity of an individual, sharpening the ability of calculation. All players have to prove their farsightedness by cognitive orchestration. Therefore, playing togyzkumalaq from an early age creates a good foundation for the further development of deep thinking, intellectual dialogue, ethical communication, and decision-making skills. 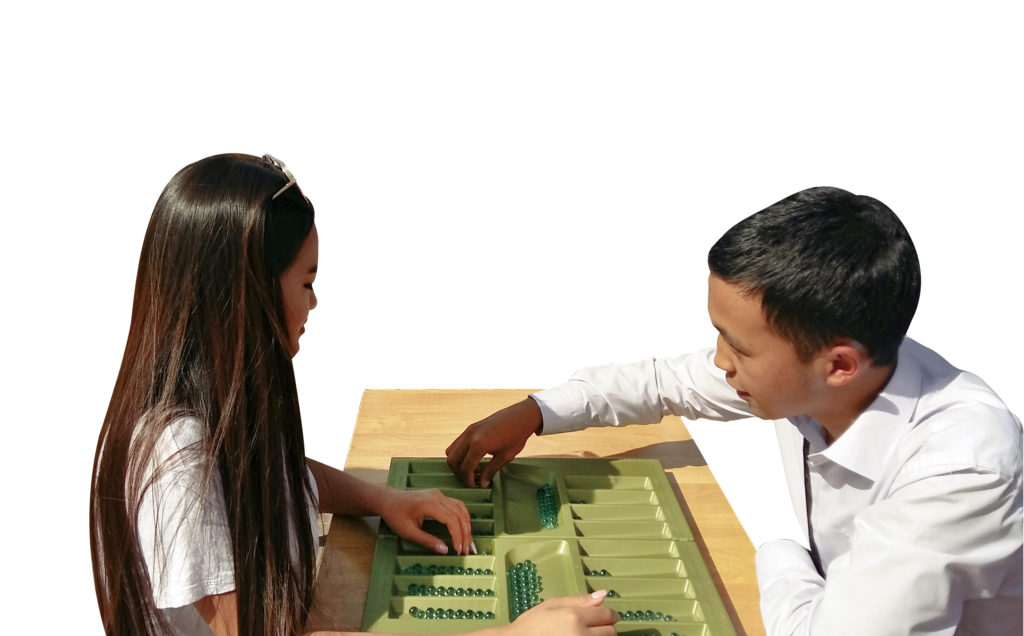 Revitalization and Safeguarding Measures
Togyzkumalaq rapidly regained its popularity in Central Asian countries after the collapse of the Soviet Union. The Togyzkumalaq Federation of Kazakhstan (www.9kumalak.com) was formed in 2004, and four years later the International Togyzkumalaq Federation was established. The number of fans of the game seems to be gradually growing every year. According to practitioners, togyzkumalaq is now popular in many countries around the world and has one
of the leading positions among online games. The game has become recognized as a major mind sport and is being promoted as a national sport by governments in Central Asia. It is played by men and women, children and adults; in addition, special versions adapted for blind players have been launched. There are regular regional championships across the Central Asian countries, along with the international tournaments outside of the region. Nevertheless, the president of the federation recently mentioned that “the paradox is that this game is gaining popularity all over the world, but in the country itself
it leaves much to be desired.” He emphasized the importance of introducing the game in schools and teaching children the basis of togyzkumalaq from an early age.

In early December 2020, deputies of the Mazhilis approved amendments to introduce national sports into the school curriculum for physical education. According to the Minister of Culture and Sports, they are planning to introduce national sports in schools gradually. The first to be introduced will be
Kazakh kuresi, togyzkumalaq, and asyk atu. In addition, more and more new centers for national sports and arts are expanding into new areas, offering a variety of classes and activities for children and youth. One of them is the recently opened “Arga alak”—the center of national sports—which was created on the basis of the “Shygys” children and youth center, where there are different sections for children to join.

Togyzkumalaq, together with toguz korgool (of Kyrgyzstan) and mangala/göçürme (of Turkey), was inscribed in the Representative List of the Intangible Cultural Heritage (ICH) of Humanity within the framework of the fifteenth session of the Intergovernmental Committee for the Safeguarding of the
ICH, which was held online from 14 to 19 December. Being inscribed in the list as a traditional game of intelligence and strategy is a significant step in its further
promotion and transmission. Additionally, recent increases in the prevalence of digital games brought to attention the potential use of the motivating
nature of this ubiquitous culture for education purposes. Togyzkumalaq is adaptable to the digital world, which has been particularly important during the COVID-19 pandemic. It can successfully be transferred to an online platform, unlike contact or team activities that require a physical presence. Today, togyzkumalaq can be accessed online or through mobile apps, which facilitates novel ways of transmitting skills to the younger generation. The developers of online togyzkumalaq games tried to preserve all the traditional features of the game in their apps, and offer different levels of difficulty.

Overall, active promotion of togyzkumalaq in education benefits both the educational process itself and the raising of cultural awareness. Many traditional games have already been lost, and people often have a limited knowledge of the wealth of their own cultural heritage, especially of the intangible type. One of the initiatives of UNESCO within the 2003 Convention for the Safeguarding of the ICH is about promoting and safeguarding ICH elements through formal
and non-formal education. Integrating togyzkumalaq in school education could be a direct contribution in activating this safeguarding measure, and an example of teaching with ICH rather than just teaching about ICH. Learning based on traditional games can guide younger generations closer to their cultural heritage through engaging, interactive, and educational content. Board games are low cost, easily available, and, most importantly, make the learning process fun.