Turkmen Embroidery: A Source of Inspiration

The decorative and applied art of any country is diverse and multifaceted, remaining a connecting thread between the past and the present, while reflecting the strict adherence of the peoples to the ancient culture of their ancestors.
One of the most ancient types of decorative and applied art of the Turkmen people is embroidery, which occupies a special place in the decoration of traditional clothing of both women and men. Embroidery is connected by its theme, symbolism with the ancient history of Turkmenistan, with all the civilizations that have passed through this land.
Since ancient times, women have been engaged in the art of embroidery in Turkmen society. At the same time, the main secrets of embroidery technology were carefully passed down from generation to generation, from mother to daughter. Young girls began to master this art from childhood. They studied the craft, learned how to choose the right fabrics, practiced the selection of colors and threads, and created new details and elements of the national costume. Traditionally, Turkmen girls themselves prepared the marriage set—dresses, robes, tahya hats and headscarves, richly decorated with beautiful embroidery, in line with national tastes and traditional requirements. 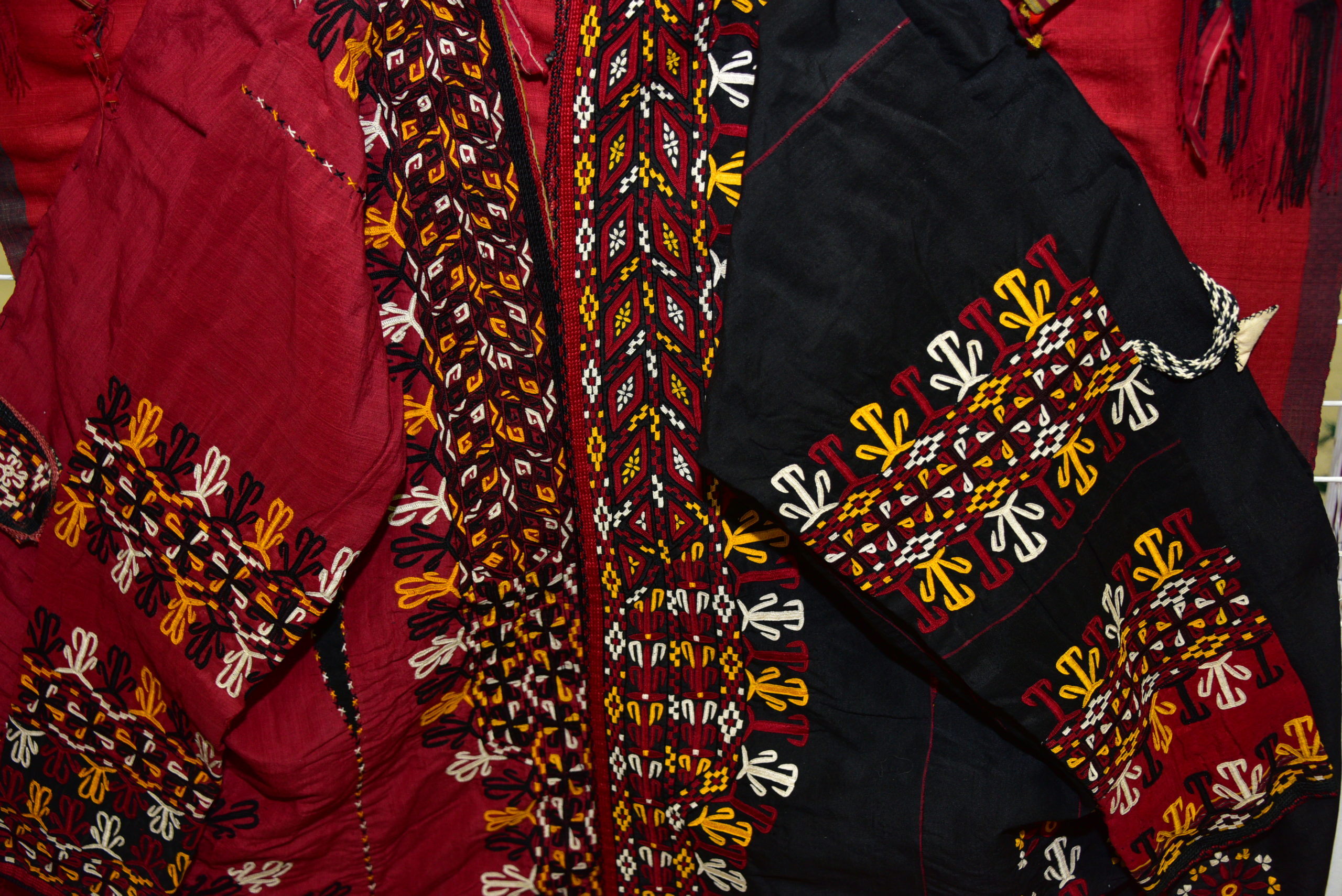 Turkmen craftswomen have always created embroidery with their own hands, producing pieces to be located on the collar, chest, sleeves, and side slits of clothing. Each pattern was invented individually, eventually seeing the development of new patterns and ornaments.
As intriguing an activity as embroidery is, it is also at the same time very time-consuming and painstaking work that requires patience and time. Skillfully wielding one small needle, the embroidery masters of the past created a whole world of patterns, embodying in them high love and aspirations. In turn, the art of embroidery had a beneficial effect on the mental ability of the masters; during the process of embroidery, women and girls thought about important plans, dreamed of the future, and, most importantly, brought themselves into mental balance. Through embroidery, they demonstrated their creative ideas and skills.

As an integral part of the national dress, Turkmen embroidery emphasizes the originality of cultural heritage. Embroidery pieces have served as illustrations to epic narratives that reflect the nature of the various regions of country as well as the history, culture, and way of life of the Turkmen people. At the same time, Turkmen embroideries have their own distinctive features: they are peculiar in technique and the character of the ornament. The uniqueness of Turkmen embroidery is also in the harmonious combination of patterns and colors, the variety of subjects depicted, and the creative vision of the embroiderer’s surrounding world.
In different parts of Turkmenistan, masters use different embroidery techniques, each of them trying to make their work unique and of high quality. The most common and characteristic variations are the three main types of seam: akgayma, kojeme, and ilme. Each of these seams are widely used by certain groups. For example, the akgayma seam is widely distributed among the population of the Akhal and Mary velayats (regions) and is used mainly for embroidery of women’s clothing, men’s skullcaps, and dressing gowns; the same seam is sewn on the collar of dresses and men’s shirts. The kojeme seam, meanwhile, is widespread among the population of the Dashoguz and Balkan velayats, although it can be found in all regions of the country. Ilme is more common in the western and northern regions.
The traditional Turkmen embroidery techniques, as well as carpet weaving techniques, provide extremely interesting material in studying the ethnogenesis of the people. The famous Russian scientist, ethnographer G. P. Vasilyeva, writes that, “the technique of embroidery ‘kojeme,’ which is now widespread in most of the territory of Turkmenistan, is almost not found among other peoples of Central Asia, with the exception of the southern Kyrgyz and occasionally among the Karakalpaks. Outside of Central Asia, such a seam exists in the southwestern Bashkirs and, apparently, in the Yakuts, i.e. among peoples geographically distant from each other, which excludes the possibility of cultural borrowing and suggests a common ethnic component in the composition of these peoples.”1 This hypothesis once again confirms the early ethnic ties of the Turkmens with the peoples of the Turkic-speaking world of Asia.
Currently, the best examples of Turkmen embroidery are kept in the national museums of Turkmenistan; hardly anywhere in the world can you find such unique pieces. Most of them belong to the seventeenth to the nineteenth centuries; however, if you look at the uniqueness of the clothing of those times, it becomes clear that embroidery, as a traditional art, existed on the territory of Turkmenistan in an earlier period of history.
Based on the above information, it can be concluded that the ancient lands of the Turkmen people served as one of the early centers of cultural civilization. Excavations of ancient settlements, uncovering artifacts from the heyday of various epochs, allow us to study the wonderful world of material culture—a unique layer of the richest heritage of the Turkmen people, where the highest art of embroidery occupies a special place.
The development of Turkmenistan’s light industry over the past thirty years of independence has given impetus to the flourishing of this unique art, as a result of which, today, the best examples of elegant Turkmen clothing are actively demonstrated at major international exhibitions and fashion shows.
The world is changing, and fashion is changing with it. At the same time, Turkmen designers are trying to preserve and enrich traditional clothing with their new brands, thereby emphasizing the splendor and versatility of Turkmen national embroidery, which is recognizable in almost every outfit. Using new fabrics, changing the cut, adding their own touches to this art, the designers of Turkmenistan fully adhere to the general principles and preserve the beautiful embroidery—a symbol of the wealth of national art.

NOTES
1. G. P. Vasilyeva, “Species of the women’s folk arts of Turkmen (their role in interethnic contacts)”, Journal of Ethnographic Review, Institute of Ethnology and Anthropology of the Russian Academy of Sciences. The author generalizes data on the folk arts that she collected during her expeditions to Turkmenia in the 1940s.