Indigenous Fijians feel a close connection with the sea, land, and nature. In Fiji, jewelry making began way back in the time of the ancestors, dating back to the eighteenth century or even earlier. Traditional indigenous knowledge, beliefs, and practices were seen in the unique creation of hand-crafted jewelry and adornments. These pieces were mainly worn to display social status, functioning as symbols of rank and leadership, or as markers of clan membership.
There were distinctions in the types of jewels and adornments worn by a chief (turaga), a warrior (bati), the wedding attire of a bride (yalewa vou) and groom (tagane vou), and those used in ceremonies and celebrations where men, women, and youths adorned themselves with necklaces of shell (taube qanivivili), bead (taube), or clay (coko qwele). Chiefs and warriors mainly wore breastplates (civavonovono), whale ivory (tabua), sperm whale tooth necklaces (waseisei, also known as wasekaseka), boar tusk necklaces and hand bands (bati ni vuaka), while white cowry shells (buli vula) are mainly worn by brides and grooms, and also worn during a traditional dance/performance (meke). 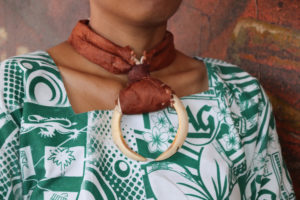 Vei va gunuvi is a traditional ceremony in which the chosen person is appointed chief. At this time and during his reign, a chief is decorated with the finest and most unique adornments his clan (yavusa or mataqali) is accustomed to, such as a waseisei/wasekaseka. He can also wear a bati ni vuaka, a civavonovono, or a tabua, and even buli vula. Any of these necklaces can be worn closely around a chief’s neck, signifying his rank and status as a chief in a village/community. A tabua is considered by indigenous Fijians as a chiefly totem (kavaka turaga). These necklaces and ornaments are accompanied with the appropriate traditional attire, mostly made up of a cloth-like material called masi (bark of the mulberry tree), which is brown, white, or yellowish in color.
Vakai sulu ni bati is a warrior (bati) dressed with adornments. During times of war and at the traditional ceremonies when a chief succeeds to his position, warriors are dressed in their proper attire; a bati ni vuaka is strung with coconut sinnets and worn closely around the neck, with boar tusk hand bands. The warriors are covered in pure coconut oil until fully shiny, and have boro loaloa made up of black charcoal markings on their face and body, and masi draped around the lower part of their bodies. It is the warrior’s duty to guard their chiefs during war and they will escort their chief during the succession ceremony. At the time of the funeral following the death of a chief (sa bale e dua na duruvesi), warriors are fully adorned in their traditional attire for the duration. They will sit beside the chief’s body and also escort it to the burial site.
Vakamau, a traditional marriage ceremony, sees the bride and groom dressed in their finest attire to celebrate their special occasion. The groom is adorned with the largest tabua, hung around his neck or wrist; these are usually given as gifts for atonement or esteem (sevusevu) to the bride’s family. The couple also wear buli vula closely strung with coconut sinnets (magimagi) or laced around their necks and even the bride’s wrist. The couple are dressed and draped with masi and garlanded with an authentic traditional salusalu—a necklace of flowers woven together with strands of vau (dried bark of wild hibiscus) and paogo (sago) leaves. 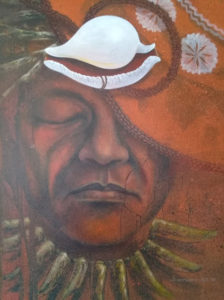 If there is hope let me know by Anare Somumu, Visual Artist, depicting the struggles of the iTuakei people in Fiji. Buli vula (white cowry shell) signifies the sovereignty of the iTaukei people. © Elizabeth Edwards

On the occasion of a chief’s succession ceremony or a marriage, the vanua (land, village), clan, and the community become increasingly excited leading up to the event. During the event, men, women, youths, and children will adorn themselves with matching colorful jewelry sets of all shapes and sizes of taube qanivivili, taube, coko qwele, earrings, bangles, bracelets, finger rings, different head pieces, and baskets to fit the occasion. They complement their adornments with matching sulu and jamba (patterned dresses and skirts). The sulu and jamba patterns are similar in color (kalavata or bula wear) and are collectively worn by extended families, representing the different families present for the occasion.

Traditional ceremonies (vei qaravi vaka vanua) and celebrations (vei marau taki) are common during the installation of a chief, a wedding, an event, a birthday, and more. During these special occasions, a carved wooden bowl (tanoa) is used for mixing and serving kava (yaqona); this bowl is also decorated with buli vula strung onto magimagi at least 30–40 centimeters in length. This is then pulled out and the shell is pointed toward the chief or principal guest of the occasion. Dancers and performers both male and female are dressed in traditional attire, laced with buli vula, salusalu, and fans (iri), and they perform traditional chants, songs, and dances, creating an atmosphere of joy and laughter and strengthening the bonds of community.
The traditional indigenous knowledge, beliefs, and practices related to the unique hand-crafted jewelry and adornments made in Fiji have been passed down from generation to generation since ancestral times. The traditional aspects of the jewelry and adornments have been maintained and safeguarded over the years, and are still being used in adorning chiefs, warriors, brides and grooms, participants in traditional ceremonies, and more.
The contemporary jewelry of Fiji has evolved and been modified to suit the modern era, and these unique pieces are being worn, marketed, and commercialized, both locally and internationally. n