We Work among the Pamir Mountains

It is not for nothing that the Pamir Mountains in the Gorno-Badakhshan Autonomous Region of the Republic of Tajikistan (GBAO) are called the “Roof of the World”—Ismoil Somoni’s peak reaches 7,495 meters.
Pamir is characterized by huge permanent glaciers and narrow mountain ranges with sharp snowy ridges, and large lakes sitting 5,500 meters above sea level.
The impenetrable mountain gorges go some way to explaining the emergence of an exceptional lifestyle, different languages, dialects, and monocultures. Currently, six of the oldest East Iranian unwritten languages are in use in the Pamirs: Shugni, Rushani, Bartangi, Yazgulami, Wakhi, and Ishkashimi as well as some Persian dialects and Kyrgyz languages. The folklore of the Pamiri people is passed on not only in local vernacular, but also in Tajik, the official language.
The Pamir highlanders have their own distinctive traditions.
A person from this region has their journey from birth to death accompanied by all kinds of rituals, customs, and traditions. Life events such as maternity, family and household, wedding, marriage, holiday, and calendar production are marked, adding meaning to the highlanders’ daily life.
Each mountain dweller has the knowledge and skill of a particular craft: carving wooden cups and spoons or wooden galoshes, sewing sheepskin coats, shoemaking, erecting walls, weaving carpets, and producing woolen blankets or stockings. The inhabitants of the Pamirs are farmers and cattlemen, hunters, builders, musicians, singers, dancers, or otherwise connoisseurs of traditional culture. Noticing the decline of such a wealth of culture, local scientists and journalists registered a public organization, Kuhhoi Pomir, in 2014 with the aim of studying and documenting the cultural heritage of Pamir mountain people and their philosophy of life.
Since the socio-economic life of the Pamiri for centuries was heavily dependent on their wild nature, the organization paid special attention to the conceptual triangle of Man–Culture–Nature. The researchers were interested in the culture of food, dress, home maintenance, traditional medicine, and concepts of the environment.
In this context, it was interesting to study the culture and peculiarities of the national hunting and gathering practices in the Pamirs, these being the first activities that saved people from hunger for centuries. Research on traditional hunting was carried out in six regions of the Pamirs. This project also sought to document knowledge and practices, customs, rituals, children’s and youth competitive games, and folklore reflecting the hunting craft.
The collected material was published as a book, The Culture of Hunting in the Pamirs, that was highly praised among experts in the field. Articles were published in media and academic journals; documentaries were prepared on the cultural aspects of the relationship between people and nature.
In 2015, Kuhhoi Pomir, in cooperation with the Christensen Fund, initiated a one-day ecological educational and cultural event, the Wildlife Festival, the aims of which are to convey intelligibly to the younger generations the collected ancestral knowledge about nature, and to attract eco-cultural tourists.
The festival also aims to revive the culture of behavior in nature, folk songs and dances, national dishes, and organize performances by cultural practitioners and sacred people, poets and scientists, hold exhibitions of handicrafts, drawings on stones, national games, competitions, presentations, and quizzes. The festival is traditionally held in remote, sacred sites.
In 2018, the Environmental Committee of the Tajik Parliament recognized the Wildlife Festival as the best event related to culture and nature and awarded Kuhhoi Pomir with a cash prize and a memento. Considering the effectiveness of Kuhhoi Pomir’s activities in the preservation of national culture, the organization was admitted to the ranks of UNESCO clubs in Tajikistan in 2016.
Kuhhoi Pomir is the only public organization in Tajikistan to have received accreditation from the UNESCO General Assembly under the Committee for the Protection of Cultural Heritage (7GA-2018 NGO-90403).
Over centuries, the inhabitants of the Pamirs’ strong dependence on wildlife has strengthened people’s knowledge about the environment, climate, seasons, mountain rivers, wild animals, and grasses. In cooperation with district education departments through a pilot project, Kuhhoi Pomir opened clubs for wildlife lovers and local culture in four districts. School clubs were created to involve the younger generation in the challenges of protecting local biodiversity and bioculture, reviving folk eco-cultural knowledge.
Dedicated classrooms for clubs at schools were equipped with TVs, parabolic antennas, a laptop, photo camera, and about two hundred titles comprising books, brochures, and CD-ROMs about history, the Pamiri languages, ethnoculture, bioculture and biodiversity, and eco-cultural tourism.
The clubs have become platforms for discussions about traditions, safeguarding of local tangible and intangible cultural heritage, and historical, natural, and cultural artifacts.
The equipment allows schoolchildren to make short films and photo essays about nature, the history of the area, and the connoisseurs of culture. Club members and schoolchildren can also record national children’s games, document folk knowledge and traditions, conduct storytelling, and take an active part in various school competitions. 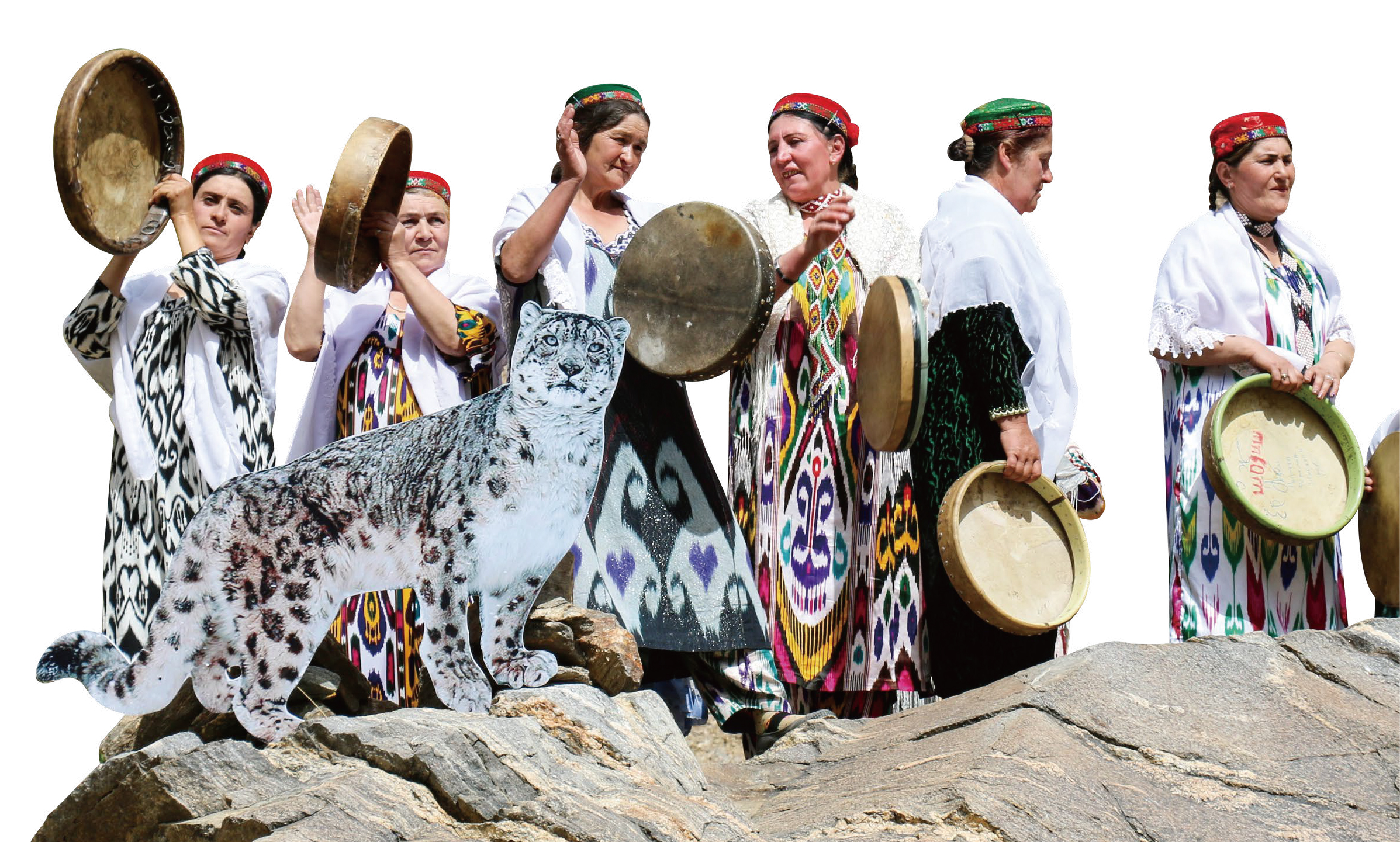 Festivals held by Kuhhoi Pomir through the cultural traditions of locals to urge people to respect, value, protect, and preserve wildlife, especially the rare, wild, beautiful, and magical symbol of the Pamirs—the snow leopard. © Qurbon Alamshoev

Recently, our organization has registered “National Dastarkhan of Pamir” with the International Slow Food Association. Our researchers are engaged in studies of the gastronomic culture of the Pamirs, the compilation of a database of the regions flora and fauna, and the recipes of national dishes.
The organization arranged for specialists from the State Institute of Culture and Information to conduct a seminar with researchers on the methods of conducting an inventory of ICH elements. Twenty-three people attended the seminar, including our volunteers from remote areas of GBAO. We are currently seeking funds for expeditions and compiling a catalog of objects and elements of the ICH of GBAO.
Today, our organization, together with the National Commission for UNESCO and the local government of the region, participates in initiating the process of nominating the traditional Pamiri house—Chid—as an element for inclusion in the UNESCO Representative List of the Intangible Cultural Heritage of Humanity. The chid looks a little like a temple, and it contains important components of architecture, ethnography, religion, philosophy, ecology, hygiene, history, family, household, and social life.
The inclusion of the unique chid, a cultural space found only in the Pamir mountains, could preserve several traditions, customs, knowledge, experience, skills, and crafts.