Block printing is a technique to create patterns on fabric using blocks. Ink is applied to the wooden or brass block, which is then pressed onto the fabric by hand to impart the design. These blocks are customized and carved intricately, and can be used to print a design of between one and six colors. Block making has been practiced in India for the last 300 years.

Pethapur, about 33 km from Ahmedabad, in Gujarat, is home to a community of artisans who have been involved in making wooden blocks for years. Blocks from Pethapur are considered to be the best and earned the Geographical Indication (GI) Tag No. 585 in 2017. I had the pleasure of visiting with Satish Prajapati, a skilled craftsman in Pethapur, when he shared the history and process of block making with me.
In the past, women became bored of wearing plain clothes, so they started printing them with designs made by dipping bangles in color. This gave the carpenters an idea, and they started making blocks featuring different designs. Thus began the art of block printing. Blocks in Pethapur were first made by the Gajjar Mistry community. Mr. Harjivandas of the Prajapati community learned this art from the Gajjar Mistrys and became an expert. Later his son, Govindlal Prajapati, learned from him and became a master in this art. He is now considered the best in India in the art of block making. Bagh printing, a dying art, was revived due to his efforts. He has made innumerable blocks for Bagh printers, and they have won both national and international awards for their prints. His son, Satish Prajapati, is the third generation of the family practicing this art.
He learned the skills from his father, becoming really interested at the age of twenty-one, and at present has twenty-seven years of experience in making blocks for Kutchi prints.
In past times, craftsmen made blocks of from sheesham (Indian Rosewood), which was strong but expensive. Today they are made using sagwan (Teak), which is less expensive, easily available, and is not as susceptible to termite attacks.
It is also soft, hence carving on it is easier. The wood comes from various places, including Valsad and Gandhidham. Whenever a tree falls in the jungle of Valsad, it is auctioned. Some of the highest bidders sell it in Pethapur, where it is bought by these craftsmen.
They also get wood from the houses of merchants of Pethapur who have migrated to other cities.
Their houses have pillars made of teak, which the craftsmen buy to repurpose.
The wood is cut into slabs and kept immersed in water for some days to season it. It is then left to dry completely for six to eight months. This prevents the wood from warping later on.
The wooden slabs are cut into small rectangular, square, or oval blocks. These blocks are seasoned again by keeping them immersed in groundnut oil for three days before they are dried completely. This process makes the blocks stronger.
The surface is then smoothed with files and similar tools. It is polished by rubbing on a wet khaara stone, which is procured from Rajasthan. The surface is checked again and again with the help of a rule to ensure it is perfectly smooth. Even a slight roughness on the block will spoil the design when printed.
White poster color is then applied to the block, and the design to be carved is drawn on it with a pencil or needle, always in double lines, and in the mirror image of the design to be printed. Knowledge of geometry is very important when drawing the designs on the blocks. The design is colored to identify the difference between parts that are to be retained and those to be removed and discarded—the colored part is the part to be retained. The block is then carved with chisels,
hand-drills, wooden mallets, and so on. Tools handmade by the craftspeople themselves are used to carve finer details on the block—this work requires a lot of patience and skill. Holes are drilled in the blocks to allow air bubbles to pass through so that color doesn’t spread and the design doesn’t get smudged while printing, and handles are attached. The block is now ready for use. 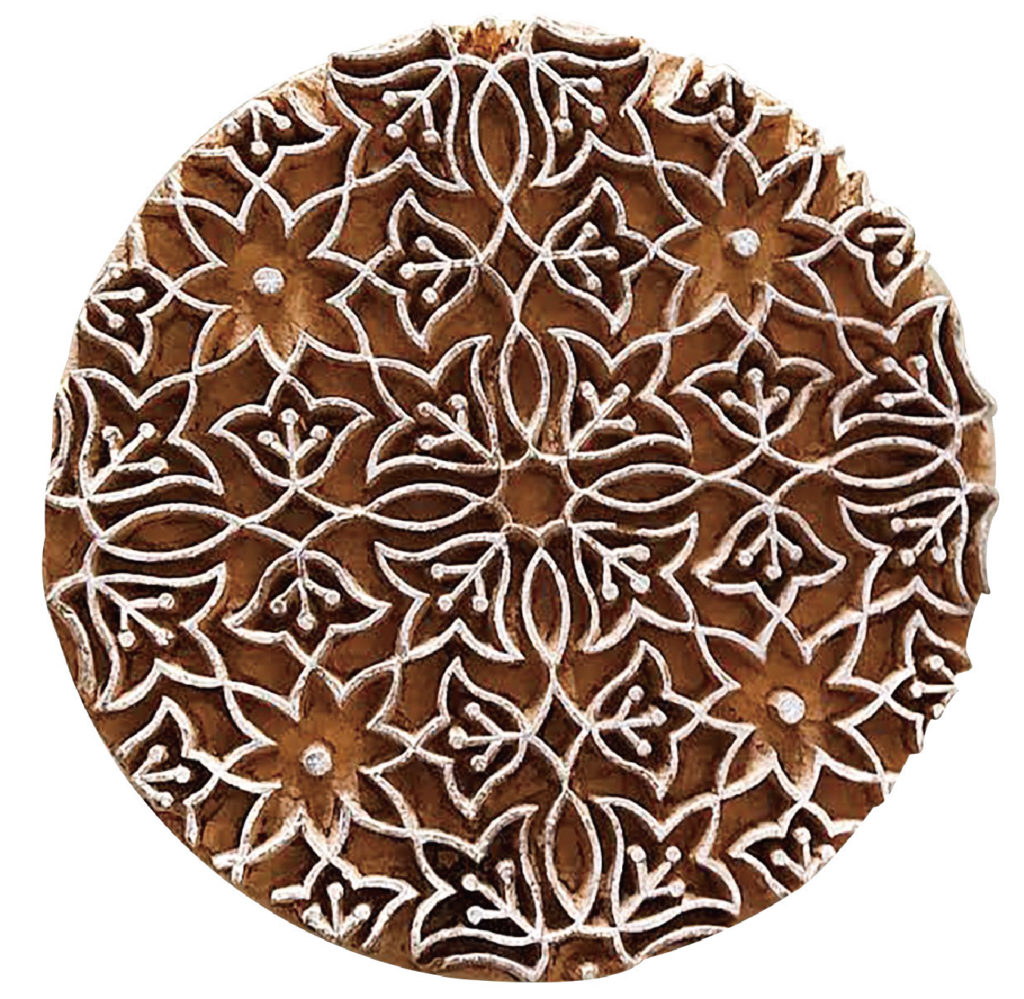 The blocks are sold to Ajrakh, Batik, Sanganeri, Kutchi, Bagru, Dabu, Bagh, and pigment printers. The price of a block can range from INR 300 to INR 25,000 depending on its size, the intricacy of the design, and the number of colors to be used in printing. Blocks are known by different names according to their function. These include the rekh block (used for printing outlines, sometimes with brass wires or strips attached in the grooves on the wooden block), datta block (to fill colors), and gadda block (to fill four colors).
One block can be used to print 5,000 meters of fabric, and the size of the blocks varies from 2.5 x 2.5 cm to 25 x 25 cm. 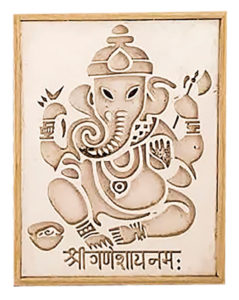 After every use, the blocks are washed properly and dried indoors completely to prevent them from getting damaged. If dried in the sun, the wet wood can crack.
The artisans also use their skill to make mehendi (henna) blocks, jewelry boxes, gift boxes, door handles, furniture, and other decorative articles. In the past there used to be about 300 people practicing this craft in Pethapur. But now the figure is dwindling as the younger generation prefers to pursue other occupations. At present only about twenty artisans still practice block making here.
Local consumers avoid buying block-printed fabrics as they are expensive due to the hard work put into their creation.
They prefer screen-printed fabrics as they cost less. Demand for block prints is higher in the international market, but there is now shortage of skilled artisans in Pethapur. To safeguard these skills and traditions, more products that make use of blocks should be designed and ways should be found to encourage more people to take an interest in and learn this art.